‘What would St. Francis do?’

My Brother Scott swears our cat Wombat does not exist. He and his boys once spent 10 whole days here and did not glimpse her once. I finally took this picture as proof that she does indeed live and breathe, even if, like the snipe, she is hunted, but never ever seen: 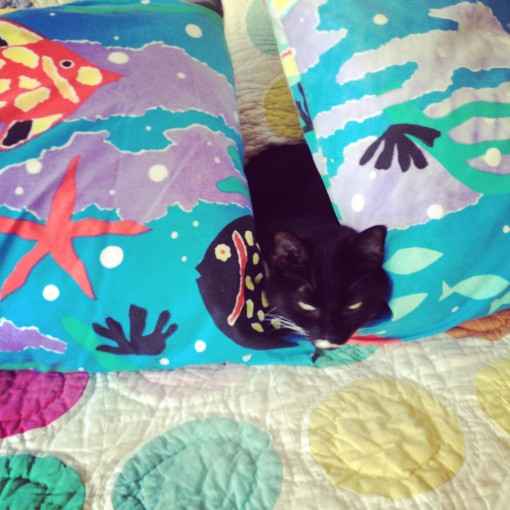 Even when Wombat isn’t hiding, she is. Hiding

But this story is not really about Wombat. After all, Wombat, though you will have to trust me since you will never actually see her, is still with us. This story is in memory of The Cat of The Child’s Childhood, named (by The Child herself) Tuna.

Tuna was, as were all the cats in my life—those gathered randomly while growing up Lutheran in semi-rural Southern Illinois, and those adopted, serial-monogamy-style, during my Single Womanhood, Seriously Dating, and Moving-in-Together-But-Negotiating-Marriage Years—a stray. A ‘rescue’, a ‘shelter’, a ‘Heinz 57 Varieties’, a ‘mutt’. Tuna came to us from The Dude’s Cousin Charlie’s Friend, the one Who Had Too Many Kids Who Liked To Pick The Cat Up By The Tail. END_OF_DOCUMENT_TOKEN_TO_BE_REPLACED