‘Well, you can bet they don’t sing Kumbaya‘

After last week’s story about The Dude and The Child and Gary the J, I promised to stay away from stories involving politics. So, instead, here’s a story involving religion.

It’s about the time(s) The Child went to Atheist Camp.

First, let me say something about camp. When I was a kid in the Midwest there were two kinds: Church Camp and Scout (specifically, Boy-or-Girl-Scout) Camp. I’ve learned from my Northeastern friends that they had their own two kinds: Day Camp and Sleepaway Camp. 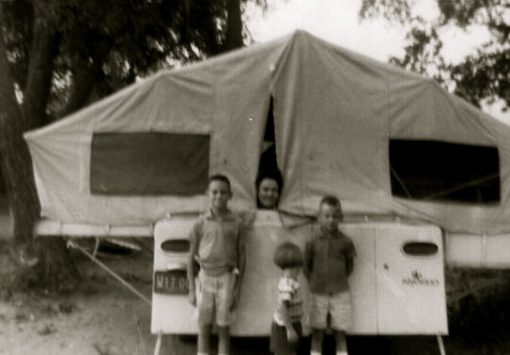 A third kind of camp. With an ‘ing’ on the end. We did a lot of this kind when I was growing up. The picture at the top of this post shows us ‘dining’ while not-Atheist-Camping

These days, of course, there are all kinds of camps, Math Camp and Music Camp being just two I can think of. There’s even Computer Camp. Wait. Isn’t there a danger of getting S’mores on your keyboard? But I digress.

Anyway, this atheist camp was (and is; I looked it up, and it’s still going strong) called Camp Quest. The name ‘Quest’, I learned from its Wikipedia entry, is actually an acronym for ‘Question, Understand, Explore, Search, Test’. Hmmmm. Like ‘LOL’ is ‘Lots O Love’. END_OF_DOCUMENT_TOKEN_TO_BE_REPLACED