‘My Mom and Magazine Club’

A couple of weeks ago I told you about how my Dad loved to go out on his houseboat, the Sir Launch-A-Lot. He’d fill ‘er up with clients and/or family members and tool around Carlyle Lake for hours, regaling one and sundry with jokes and stories. 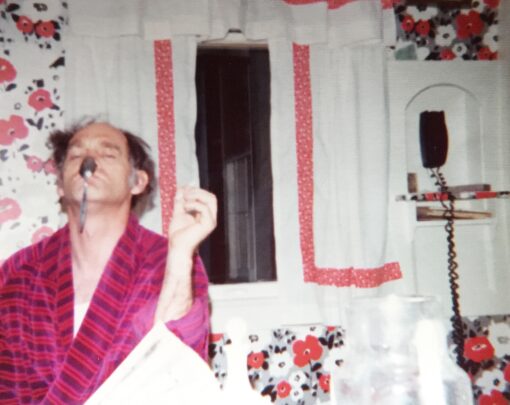 My Dad was pretty entertaining on land, too. Here he demonstrates his favorite trick

Mom liked the houseboat, too, but her favorite thing was to go up on the roof with a nice big stack of women’s magazines — Redbook, Good Housekeeping, Woman’s Day, Family Circle. and the like. There were seven of these magazines that were extremely popular back in the Sixties — they were actually referred to as “The Seven Sisters” — and my mom took several. She liked company while she did this, and I was happy to oblige. We’d work our way through the stack making small talk — jumping in the Lake every once in a while to cool off. 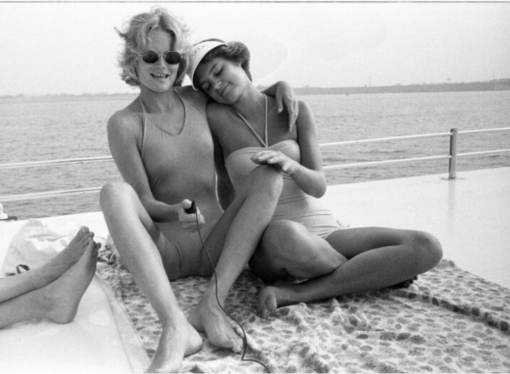 Favorite Sister Laura and me up top of the Sir LAL, demonstrating an early selfie, courtesy Oldest Younger Bro Scott

While paging through the issues, we’d make (mostly snarky) comments on the fashions and the celebrities — no Kardashians, but plenty of Kennedys — and the ads. This was back when they ran those ads that showed some gorgeous woman in a bra with a headline that said, “I dreamed I painted the town red in my Maidenform Bra.” And there was a feminine hygiene ad that showed a box with just one copy line: “Modess: because.” I used to wonder, “because why?” We’d even make comments on the magazine covers, which always seemed to feature both an outrageous dessert — “Scoop Up Double Chocolate Brownie Sundae!” — and a fad diet — “Get Ready for Swimsuit Season in One Week!” 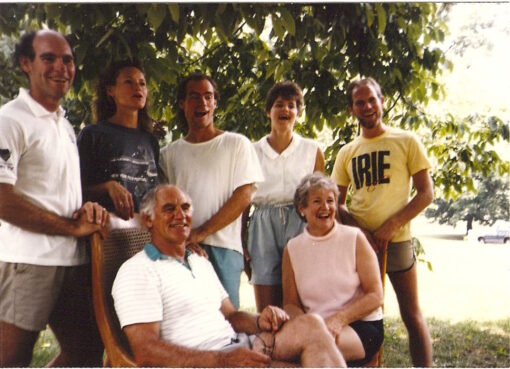 I don’t have a lot of photos of the inside of the house in summer — it was so darned hot, we spent most of our time outside

There were also cool regular features in these magazines that were fun to read bits of aloud. One of our faves was “Can This Marriage Be Saved” from the Ladies Home Journal. We also liked to scope out interesting recipes — leafing though women’s magazines was how we discovered Jello Cake, which is one of the most delightful creations ever. I was going to say “dessert” creations, but in our family, Jello Cake never made it to dessert. It got eaten as soon as it “set.” One Jello Cake that was destined for dessert (to grace a client houseboat outing) was found marred with a big bare footprint right in the middle. It got eaten anyway. (Jello Cake is that good.) 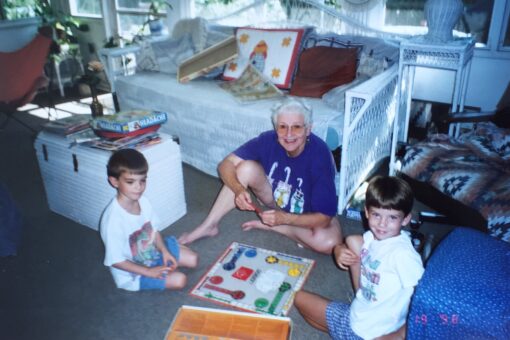 Mom on the porch with Grandkids Leo and The Child. Look closely at the coffee table and you’ll see a big ole stack of magazines

As entertaining as those houseboat social media sessions were, Mom’s Magazine Club took the whole thing up a notch. She and her friends would meet once a month and trade magazines and stories while eating a nice lunch. (Serving a nice lunch meant a chance to try out some of the recipes they found in those magazines. They’d also serve lots of coffee. I couldn’t find a shot of my mother actually present at Magazine Club, but the shot at the top of this post does show her wielding a coffee pot.) 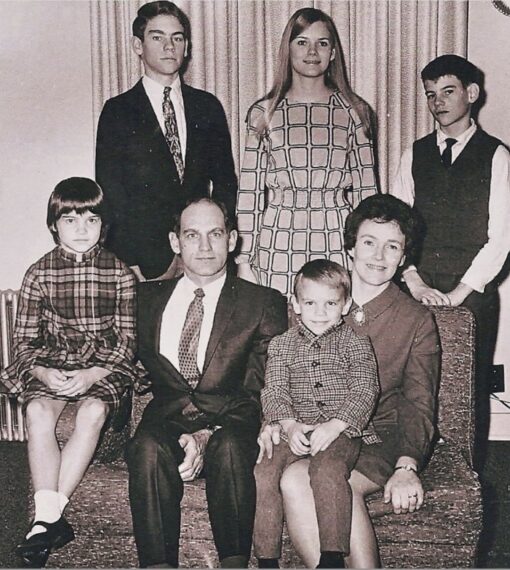 The closest I can get to a picture of Mom at Magazine Club. I bet she wore outfits kind of like the one in this family portrait

Mom and her friends would take turns being the hostess and also giving talks about articles they’d read in the magazines. Mom told me she remembered giving a particularly well-received presentation on evolution inspired by a magazine article. I’m betting it wasn’t from Ladies Home Journal.

Oh — before I go, a little announcement. The blog and I will be on vacation until the end of July. Here’s hoping you find plenty of social media (preferably the in-person kind) to keep you occupied till Lutheran Liar Looks at Life returns.