The Amazon Basin is truly a magical place. Though I wish its magic extended to beaming us home with a wave of a palm-frond wand. The name of the tour we are on (or just ended, depending on how you want to look at it) is “Paradise Revisited”. Our guide told us it had something to do with how they used to visit this part of the Amazon in the Good Old Days, then stopped when air service got spotty. Or maybe it was because once you see the Amazon, you just have to go back. Or something else travel-romantic like that. 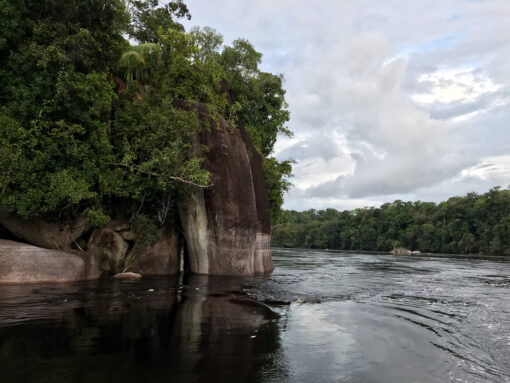 The Rio Marie. Sigh. Tempting to go back, for sure

But I’m betting on the spotty air service theory, since that’s what we encountered at the beginning of our Adventure. We went to the airport three times (two of which were failures) in order to fly from Manaus to this remote spot on the Rio Negro called Sao Gabriel da Cachoeira. We were there so much that we teased our guide by suggesting the tour be renamed “Airport Revisited”. Turned out that the airline (MAP) that was to fly us there got bought by some bigger outfit and all its planes in this neck of Brazil (not just ours) got rerouted to more profitable airspaces.

But Mr. Enterprising Guide pulled a charter flight rabbit out of his hat and got us there (finally). 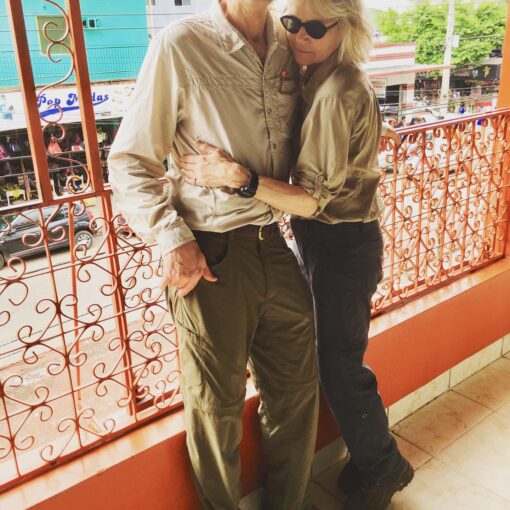 Our accommodations in Downtown Sao Gabriel. Once we got there, that is. Sorry for cutting off your head, Dude. But it wasn’t me who took this picture

This is where the Good Part comes in. After one night (was supposed to have been three) in Sao Gabriel, we were whisked by small boat to a much larger boat that was vastly different from our Amazonian Vessel of Two Years Ago, the Tambira. 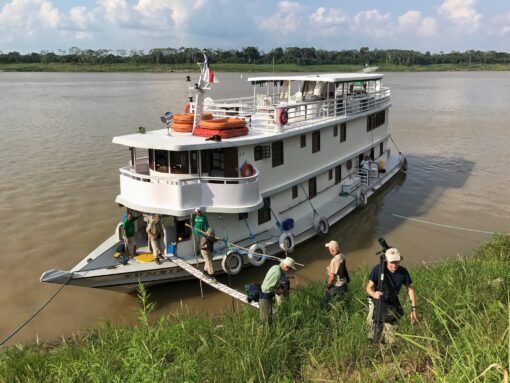 If the Tambira was the African Queen, the Untamed Amazon was the Queen Mary. Not only did it have air conditioning and (gasp) hot water, but it had an amazing chef, a masseuse (we never once used her services, poor thing), and a wonderfully well-stocked wine-and-liquor cabinet. (We were served Veuve Cliquot on Christmas Eve.) 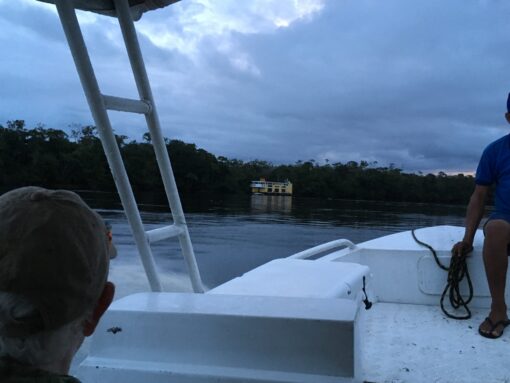 Our floating hotel, the Untamed Amazon, beckoning us with food and drink after a hard days’ birding 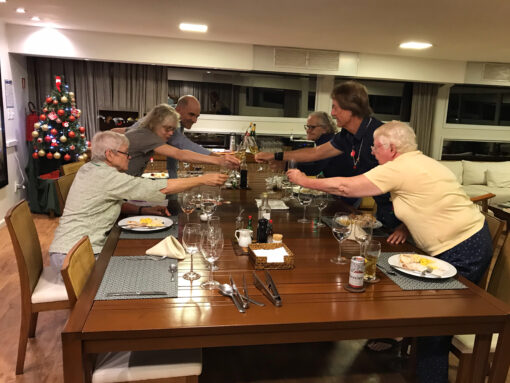 Toasting our Christmassy good fortune on board the Untamed Amazon

We spent five marvelous days onboard this floating hotel, taking birding excursions in smaller boats two or three times daily. (Wayne and I were part of the smaller, more intrepid band that left two mornings in a row at 3:30 to stalk the Nocturnal Curassow. Yes, we found it, though I don’t have a picture; it wasn’t light out enough for photos when we found it.) 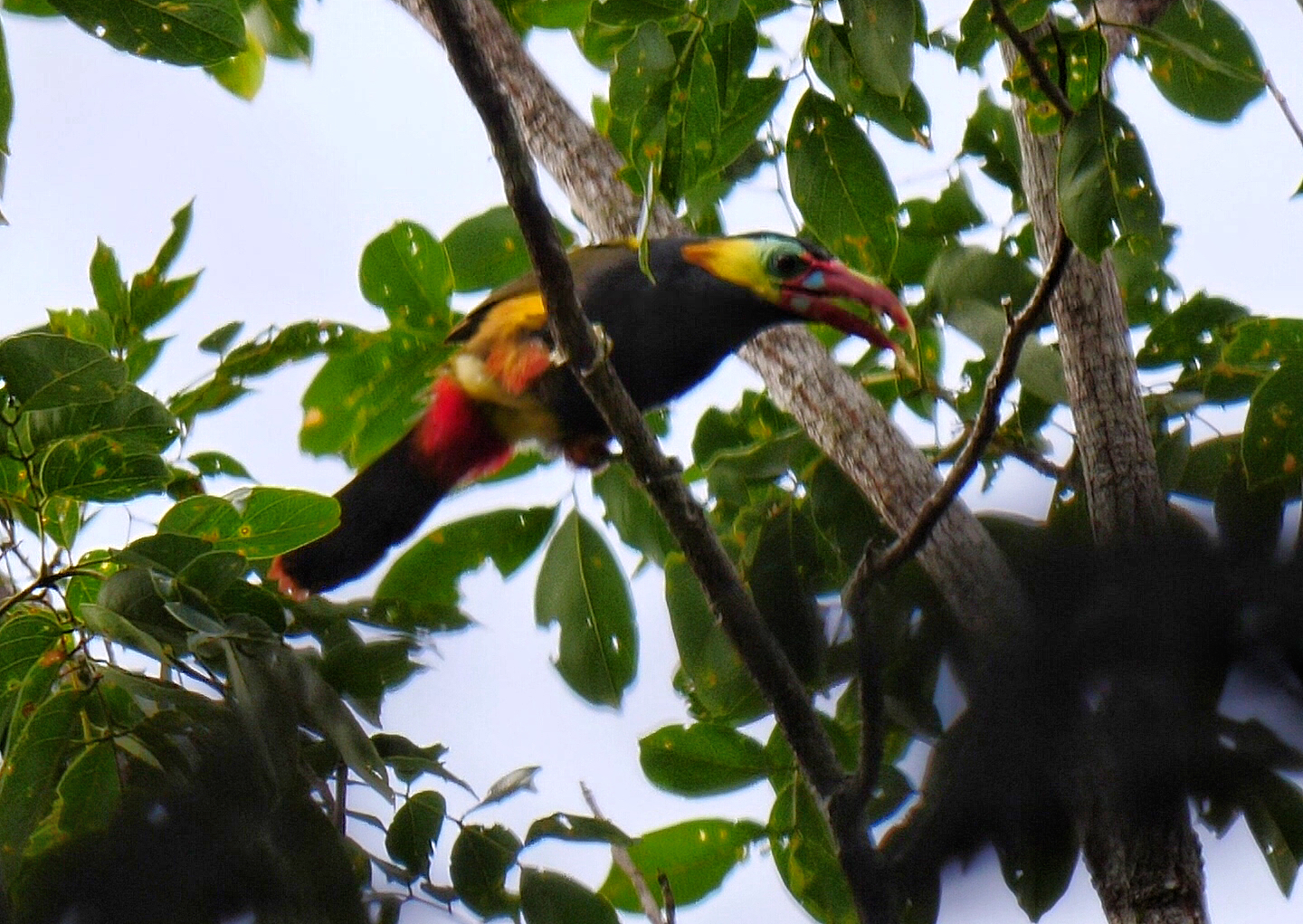 It was light enough for these two guys to get photographed. Here is the Tawny-Tufted Tucanet

And here is the Collared Puffbird. I (ahem) spotted both of them for the group

But then, alas, it came time to depart. Which we did in marvelously exciting style — by seaplane. The Dude had been in a seaplane before; in fact, he had even flown one. But, for me, it was a new experience, and it certainly did not fail to deliver excitement. 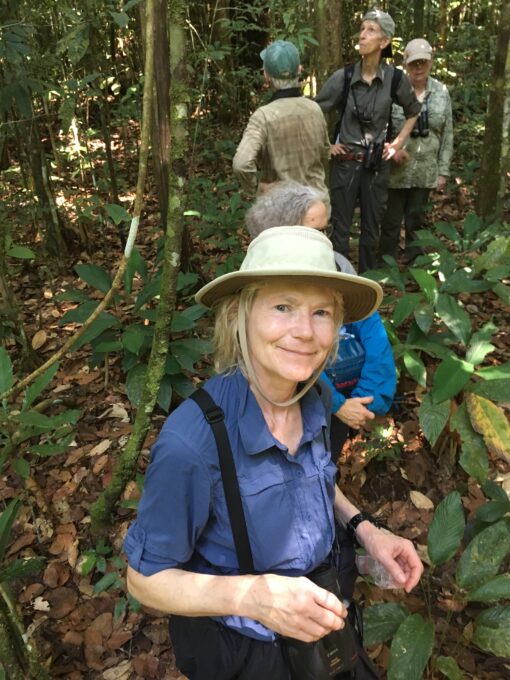 Happy Me, excited (and very sweaty) in the Actual Untamed Amazon

I’m writing this post from the very same airport hotel where we spent three nights at the beginning of our Adventure waiting for a plane. And guess what we’re doing? Yup. Waiting for a plane. Turns out our flight from Manaus was cancelled last night. We’re leaving tonight instead — or at least I hope so. 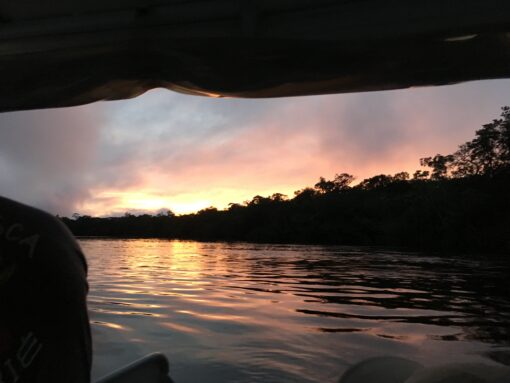 Sunrise on one of the Nocturnal Curassow Search mornings

There are six of us, and we all have connections tomorrow in Miami. Maybe we can have a slumber party somewhere in whatever airport hotel American Airlines sticks us tonight. Because, hey, we’re all in the same boat. Er, plane. 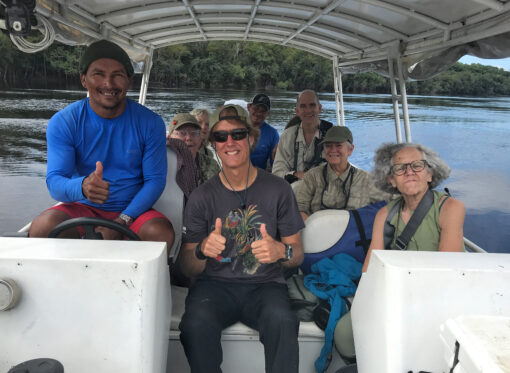 All of us. In the same boat — in more ways than one