‘Up close and personal with the Burt Reynolds of chimps’

Okay. I realize only too well that there are some of you out there who may not ‘get’ the reference in the subtitle of this piece. Well, Once upon a time, there was an actor named Burt Reynolds. He was considered quite hunky at the time. So hunky, in fact, that he agreed to pose nude (yes, nude!) for a women’s magazine centerfold. (Equal Rights, you know.)

Anyway. This piece is not about feminism; it’s a piece about chimps. Check out this link, and see if you don’t think there isn’t a rather strong, um, family resemblance between Burt and the cheesecake cousin I’ve pictured up there at the top of this story. And no, I don’t mean that as an insult. We are all primates, after all. Even Donald Trump.

Some folks thought there was a resemblance between Burt and my Starter Husband. This was, at the time, considered quite flattering. But, being sort of a naughty person, when Mr. Starter would bring up this supposed resemblance on social occasions I used to say that, yes, he did look just like Burt — from the feet down. Check out ‘My Polio Shot Marriage’ if you’d like to make up your own mind.

My current — and long-lasting — hub, The Dude, just caught me chuckling to myself over this post, and said ‘Hey, I thought Burt Beynolds was dead!’ (The Dude looks like James Taylor. Which is another story. Hmmm. Good thing I’m done getting different husbands; who knows who the next one would look like?)

But no, Burt is not dead. In fact, he made a movie just last year (the title escapes me; I could look it up, but am not sure I am going to be able to use this internet much longer). Anyway, Mr. Reynolds claims in interviews to regret posing for this famous (at the time, anyway) centerfold. But I certainly don’t regret going on the Optional Primate Trek that was offered on this Birding Shindig. We got VERY ‘up close and personal’. 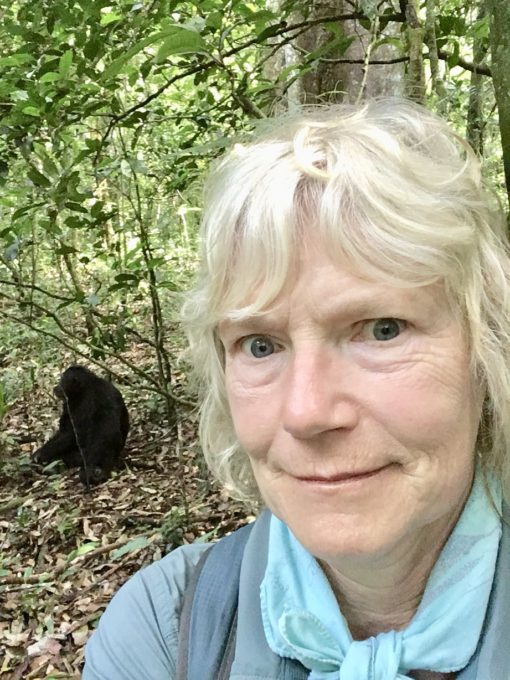 Miss Chimp makes a monkey out of me in this double selfie. Yes, that is a female. As am I. Though we both are coming across a bit Unisex here

We did this chimp-searching with professional primatologists. (And some guys with guns just in case elephants attacked us — elephants do attack people on occasion, but the guys with guns don’t kill them — they just shoot up in the air to scare them away. Whew!)

This was in a place called (and I kid you not) the Bwindi Impenetrable Forest. Which kind of reminds me of when I visit my Mom out on the Oregon Coast and there are all these places named from when Lewis and Clark got stuck there and were very very bummed. Like there is a place called Cape Disappointment. (I have a mug somewhere emblazoned with this name; it cheers me up no end to drink from it and relish the fact that I am not stuck on a damp ship with a bunch of crabby explorers.) On our trip we were certainly not disappointed. Not only did we get to skip a wet cold winter making salt, we got to hang out with a whole chimp family.

We did have to be sort of careful around the Alpha Male. (See him in the picture at the top of this story basking in his well-earned Alpha Glory.) We didn’t want him to think we were trying to usurp his role. Every time he beat his chest, shrieked, and banged on the sides of a tree we, well, did our best obeisant monkey impersonation.

Some time, some how, I hope to be able to add the two little films of the chimps that I made. One shows a cute baby chimp running merrily along; the other shows our group cowering as Mr. Alpha beats the tree trunk and shrieks. Sadly, you can’t see him, but you definitely can hear him. Sounds just like a Tarzan movie! Only with no loincloths.

Hey! I found the cute-baby-chimp-running-video!

In closing, let me share a selfie with another kind of primate, one who rarely beats his chest, not to mention tree trunks. 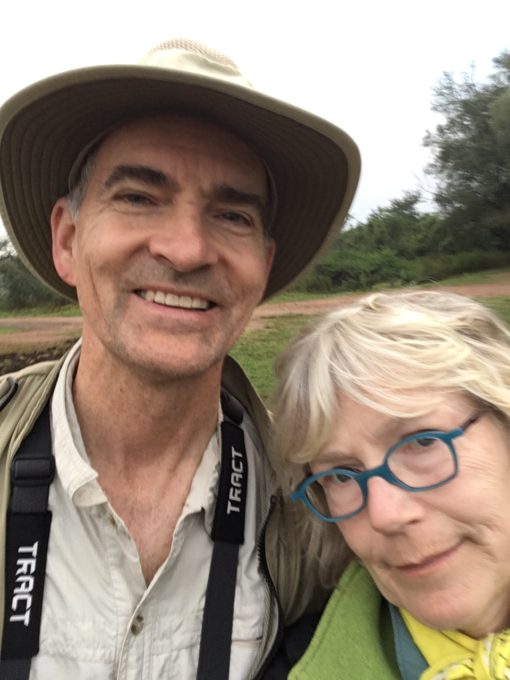 Me, with my favorite Alpha Male

10 thoughts on “Monkey see, monkey do”