I thought I might have to skip a weekly blog post (quel horreur!) but it looks like I have internet here in Uganda, at least for the moment — the key words being ‘for the moment’.

So this’ll be a quickie. Mainly photos, with a witty bit of banter as filler. (Fingers crossed on the ‘witty’ as well as the internet access.)

Let’s start with that picture up top, showing an extremely scary (at least to this Former Midwesterner) sky. Some of our intrepid birding band were actually on board that little mainly-metal lightning-bait boat and insisting upon chugging upstream to clap their eyes on the Murchison Falls—no matter that the sky looked like the one that whipped Dorothy off to Oz. But cooler heads prevailed. Thank heaven for our Hipster Birder Leader, who insisted on herding us all safely to shelter, where some disgruntled mumbling ensued while we waited out the maelstrom. We (finally) did get to chug on up the Nile. 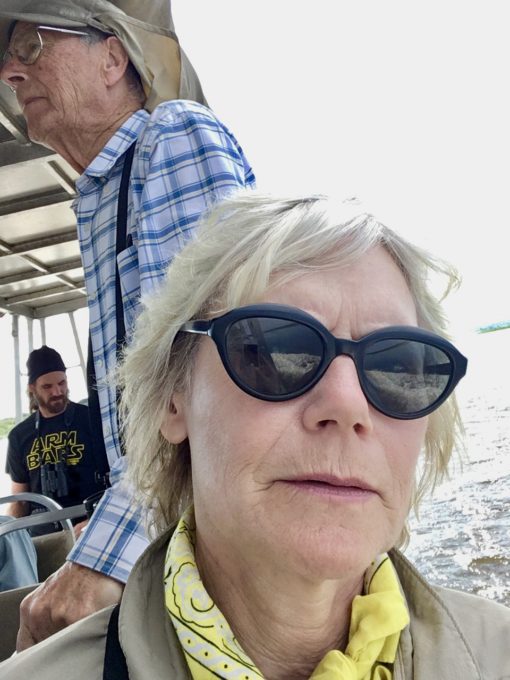 We missed the Falls, but not the boat. Thank you for not making me a Lightning Rod, dear Hipster Leader (the guy at left, not behind me. Duh)

On the Nile, we found plenty to amuse, including crocodiles and hippos. And (of course) plenty of birds, pointed out by our afore-mentioned Leader, who was himself a rare specimen—a birder sporting not only Hipster Headgear, but a beard, a ponytail, and plenty of tatts (though none of birds, I noticed.) He was also really into martial arts. 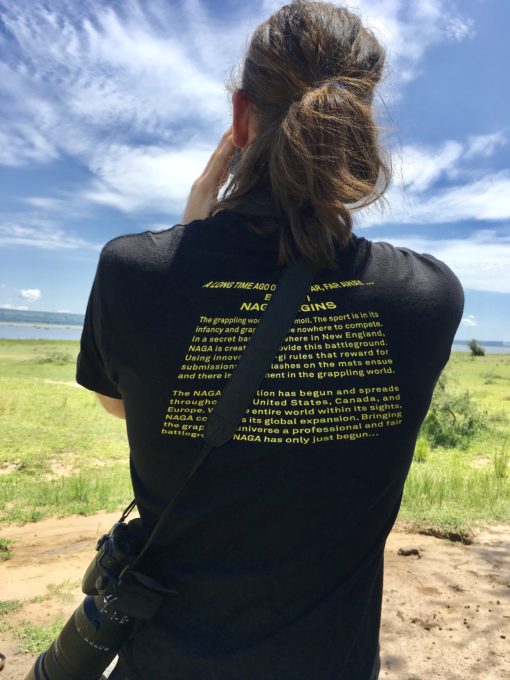 Our Birder Leader’s back, displaying a description of a martial art called ‘Grappling’ (somewhat obscured by strap supporting assorted essential gear for something called ‘Birding’)

Speaking of ‘backs’, back to the Nile. Where we found plenty to compensate for the lack of waterfalls. Here are a few highlights: 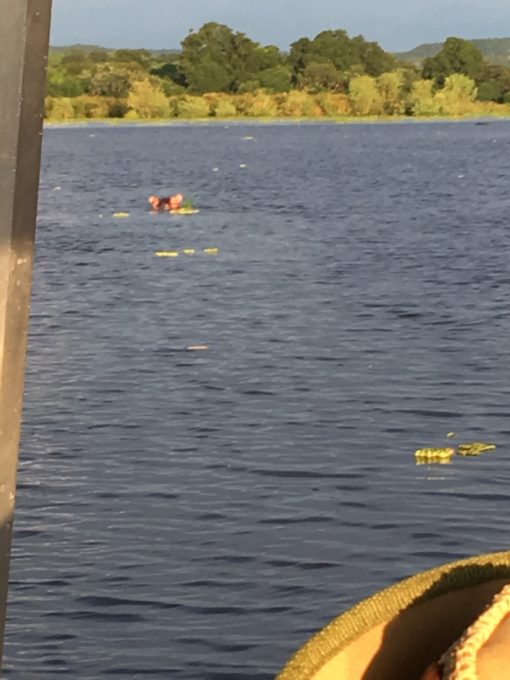 Hippos! Look up to about eleven o’clock past the hat (those are Birder Directions, by the way) and you can just make out a sneaky guy (or gal, who knows?) peeking at us 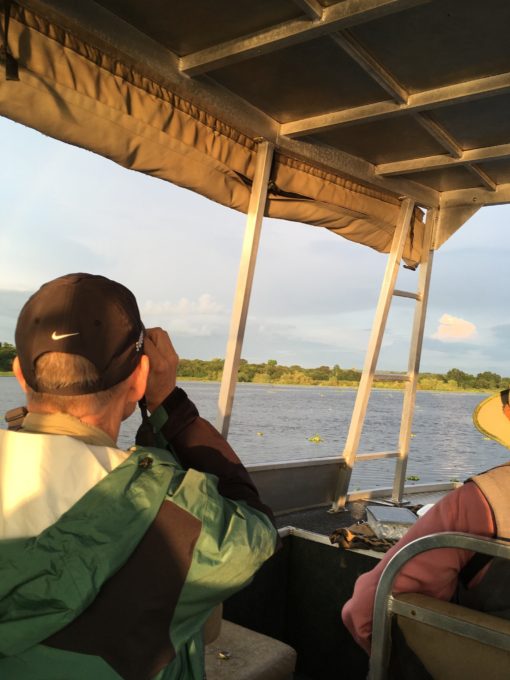 The Dude checks out the hippos, in between oodles of birds. There were crocs, too — and not the ugly shoe kind, either

The next day, after riding across the Nile on a rather creaky-looking ferry, we ventured into the safari-esque part of the park. (We’re speaking here of Murchison Falls National Park. In Uganda. When I get a chance, I’ll put in some useful links. Cross my crocodile-fearing heart.) 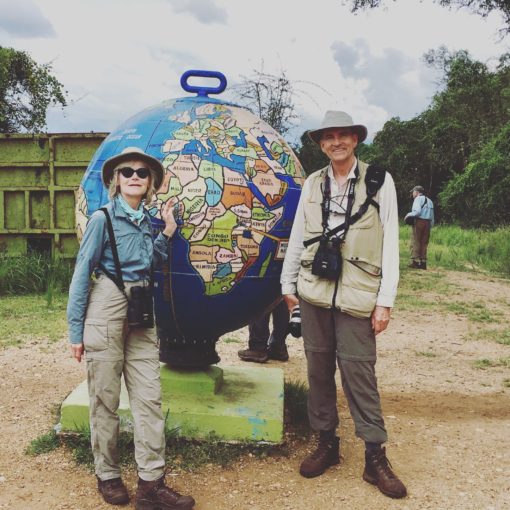 We’ve got the whole world in our hands. Well, in between us, anyway. This globe marks the spot where the ferry crosses the Nile. The Victoria Nile, that is

That safari part of the Park had its daunting moments as well. For one thing, we (mostly) weren’t allowed to get out of the vehicle, otherwise we might find ourselves a snack for a lion (though we didn’t see any) or a charging target for a Chad Buffalo. We saw plenty of those—though no, I don’t have a photo. Maybe The Dude has one. On the camera that never relinquishes its photos. 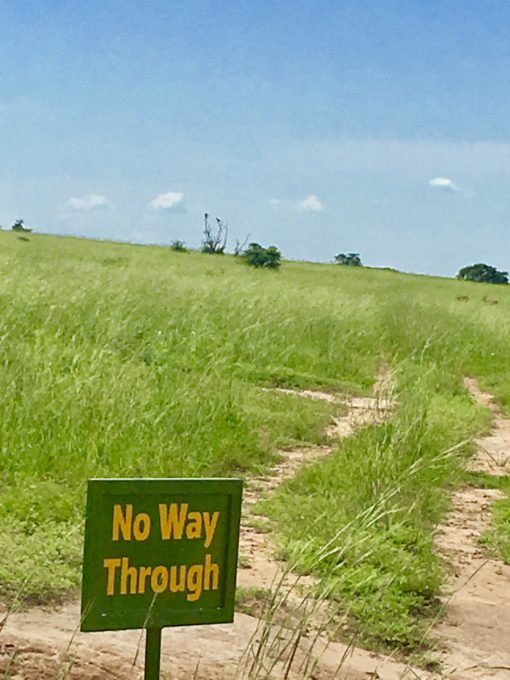 Okey-doke. But then where do those ruts lead? And why are they there?

Since I have a bit of internet time left before we take off for a bird-beladen (is that a word?) afternoon, let me finish with a few shots from the following day, when we traveled to yet another National Park (name to come when I can look it up). But here is a sign we saw along the way. Check out the bottom admonition closely: 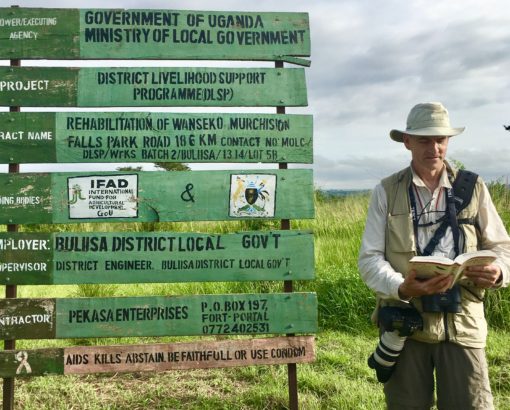 Check out the warning on the bottom of this sign. I’m opting, personally, for the ‘be faithful’ option. Crossing my fingers that The Dude concurs

In this particular park, there is a rather famous road called The Royal Mile. This is because the last King of Uganda (the one who lost to the British in a long war) used this road to do his Royal Birding. Kidding. He used the road to get to what is now known as Lake Alberta. (You can bet it wasn’t called that when the king used that road to get to it, though.)

I’m fuzzy on the details of the war that he lost, but there was something in the story about how this king failed to get all the other area leaders on his side. They turned on him (sided with the Brits, actually) and, well, there you go. Sounds kinda familiar, huh? Hold on to your pride, while the enemy divides and conquers. And now everybody in Uganda speaks English. 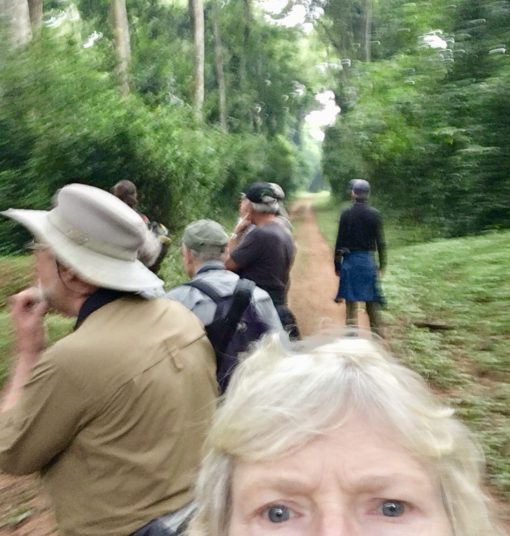 The picture is almost as fuzzy as my memory of Ugandan historical details—but this is The Royal Mile, lined with birders with bins instead of bad Brits with guns

There were, of course, zillions of birds as well as other creatures — some monkeys, some chimps, some bugs, even some dangerous trees. Though this one tree was only dangerous to other trees. I think. It’s a fig that starts as a seed that wafts on the breeze to land in the upper branches of some innocent, unsuspecting host. The fig seed then feeds on moss and such, sends down vines, surrounds the hosts tree and, um, strangles it. Gulp. 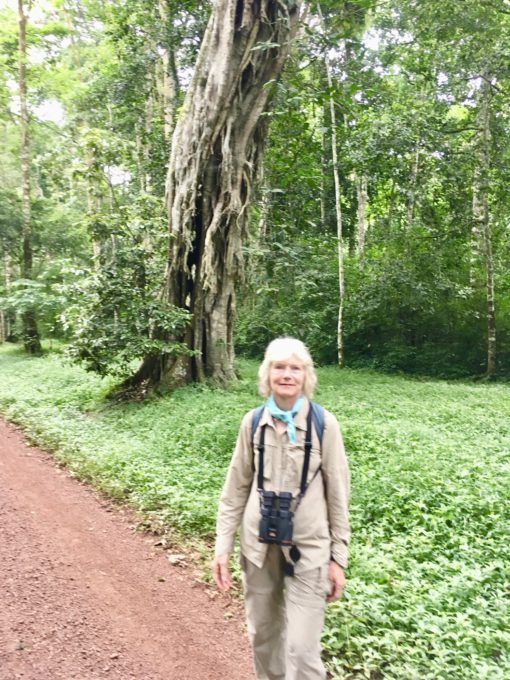 The tree behind me strangled its host tree. Instead of me

There were bugs, too. I didn’t hang around long enough to find out if they were dangerous. But everybody took a picture of this one. I’m thinking it’s because she (I’m anthropomorphizing here) was so pretty. Fashionable, even. 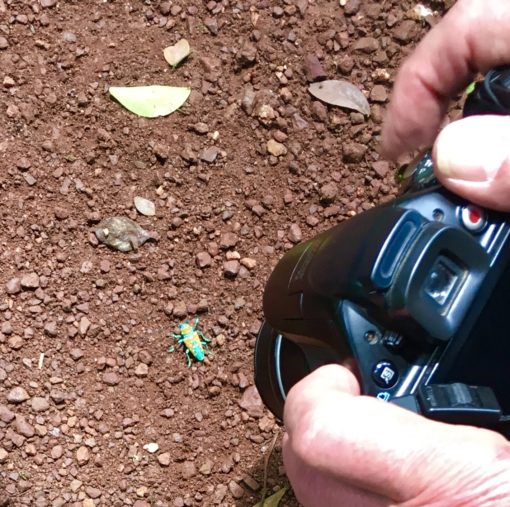 This bug dresses in Lily Pulitzer, so how dangerous could she be? (I didn’t try to find out)

Well. Time to go. Today we spent the whole morning with a band of chimpanzees. Honest! I promise to tell you all about it next time. Unless another storm gets me. Not to mention a snake or a bat or a gorilla. Yes, we’re seeing gorillas — on Saturday. 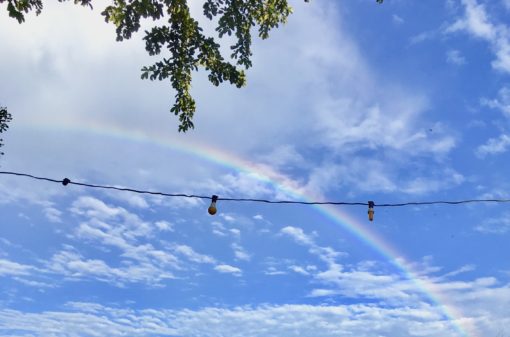 The lights at the end of the stormy tunnel. Maybe there’s a pot of gold at the end. Which this is — the end, that is

6 thoughts on “Dude, we’re not in Kansas anymore”