‘On Misophonia, Hyperosmia, and other fun syndromes’

God bless the New York Times. In just one issue (yesterday’s) there were articles about annoying noises driving people nuts, kids developing allergies because their parents didn’t feed them nuts, and one about couples married over 65 years having more sex than younger couples. Which is probably driving researchers nuts.

Now, these are all topics dear to my heart. But I feel I just have to start with the Noise Thing. 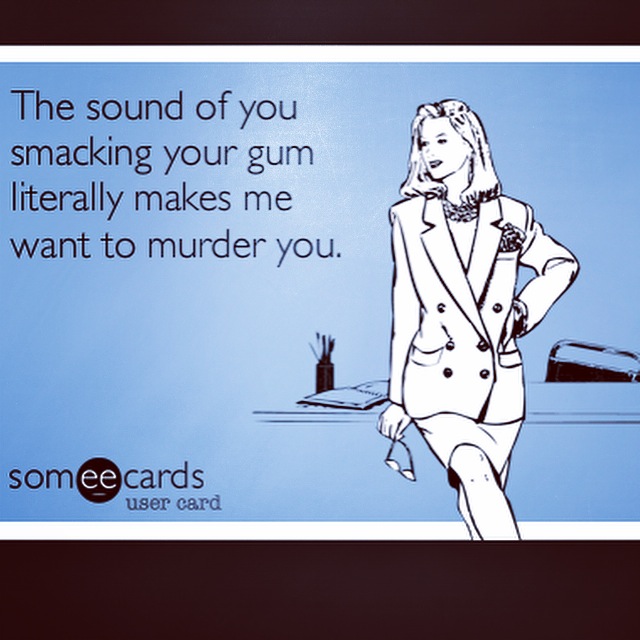 As one says when one is diagnosed with Misophonia, ‘at least I am not alone’

It seems that researchers have identified a syndrome called Misophonia (‘hatred of sound’), which means, basically, that certain ‘selective sounds’ drive certain people, um, batty. The Times specifically mentions lip smacking, swallowing and ‘breathing sounds’. Don’t you just love that this is a ‘syndrome’?

Well, I’m totally on board. In fact, to these I would add crunching ice, chronic throat-clearing, and/or methodically drumming fingers on surfaces. If you think you too lean toward the Misophonic, I bet you can think of a few more.

I have my own personal ‘bete noise’. The Dude, bless him, has this habit, when he’s reading a magazine or a medical journal, of holding the corner of the page he’s about to turn and rubbing it between his thumb and forefinger in such a way that it makes a sort of ‘scrinching’ noise. It’s not a very big sound, but as the Times writer points out, it’s not the big sounds that drive a Misophone crazy.

Honestly, I don’t recall any mention in our wedding vows to ‘love, honor, and put up with scrinching’. If you read in the aforementioned New York Times that The Dude has been stabbed with a knitting needle while reading on the couch in his own living room, you can bet that I’m the culprit. But you can also bet that a jury of Misophones would not convict me.

The eternally patient Dude can verify that I also have a very sensitive nose. Just for fun, I Googled ‘sensitivity to smells’ and came up with another ‘syndrome’. It’s called ‘Hyperosmia’, and it’s in the Merck Manual, people (!) 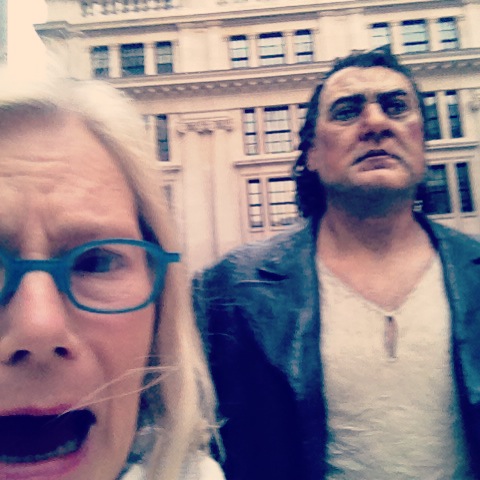 No, it’s not that he’s big and scary. I’m reacting to his recent ingestion of pesto

The scent of bananas drives me bananas. I can sniff out a tuna sandwich from across a conference room. And pity the poor gum-chewer. Gum-chewing triggers both the sound and the smell syndromes. I’m the one in the car going (at least in my own Family Car) ‘Hey! Who is chewing gum? You guys know how much I hate gum. If you keep doing that I’m gonna barf. Spit it out now.’

Once when I was pregnant* with The Child, Dude Man and I went to see ‘Dances with Wolves’. The theater was super-crowded, this film being a Big Hit at the time. The only two seats together we could find were near a woman smacking away at her Juicy Fruit, so I had to sit by myself.

*According to the Merck Manual, Hyperosmia gets worse when you’re pregnant.

But enough about my own personal syndromes. As some of you know, I worked in advertising for many years and now do a bit of freelance. I love writing freelance copy, I really do. But no one ever goes ‘Hey! We have this amazing Nike commercial we need to put on the Super Bowl. Let’s hire a freelancer to write it!’

No, we freelancers get some nice gigs, to be sure. But they tend to be more, let’s say, practical or even utilitarian projects. At least mine do.

For example. Once I was hired to write some copy for a medication to treat a condition called RLS. This stands for ‘Restless Leg Syndrome’. I kid you not. You can read about it here, on the National Institute of Health website.

The poor Account Guys were trying to brief me about these poor souls who just can’t stop their legs twitching and jumping around and I was practically snorting coffee out my nose. I’m saying things like ‘Oh, ‘Restless Leg Syndrome’! Is that anything like ‘Clicky Pen Syndrome’? Or ‘Shaky Change in Pants Pocket Syndrome’? When I realized they were serious.

BTW, I think one of my brothers had this when he was little. I remember once when he (Middle Brother Roger) was scolded thusly by my mother: ‘If you can’t stop wiggling your behind, you’ll have to get in the back seat’. (He had scored the coveted front-seat position in the Vista Cruiser.) But of course then we just called it ‘Being Antsy’. 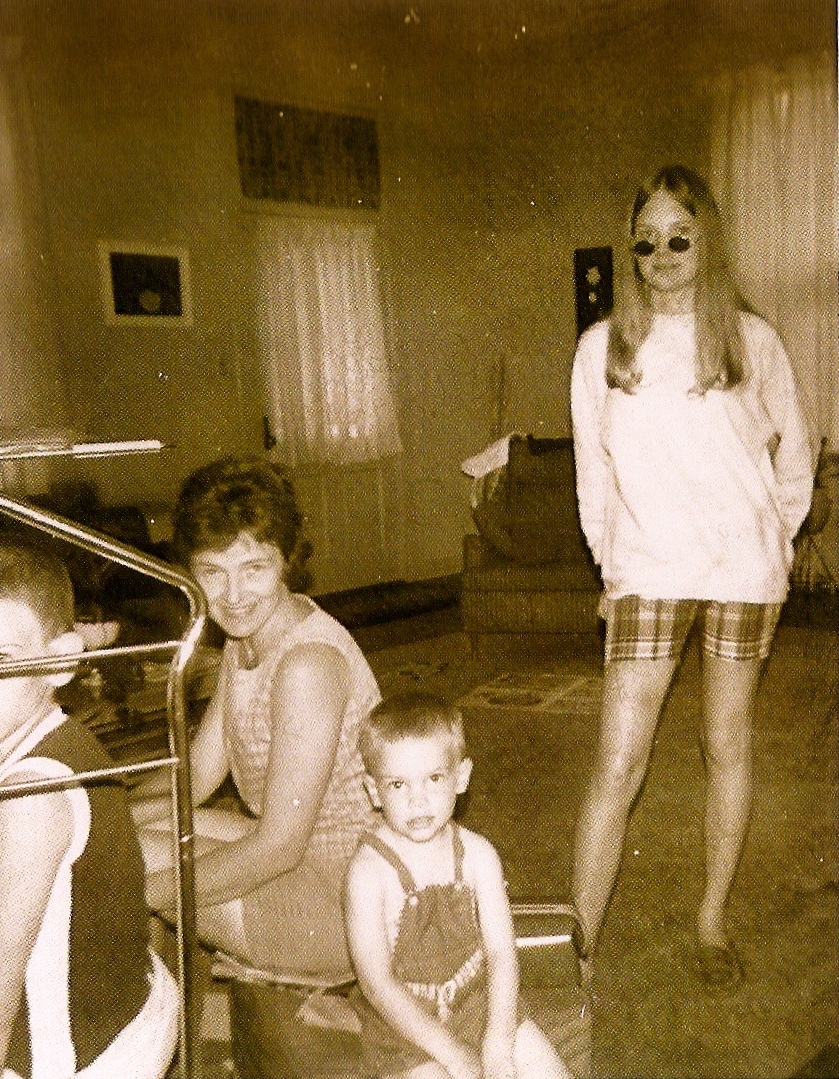 Middle Brother Roger, he with the ‘wiggly behind’, far left in Muscle Shirt

So anyway. I’m writing my little heart out on this Restless Leg Syndrome stuff (sample letter copy: ‘You know what it’s like. You’re at the movies. In a car. On a plane. When, all of a sudden your legs just start twitching…etc. etc.’), when the Account Guys come in with long faces. They tell me that we have to add a few new side effects to the already miles-long list.

And they are doozies. To wit, that this drug might cause you to experience ‘increased sexual appetite, increased cravings for alcohol, and an uncontrollable urge to gamble’. (I could not make this up.)

So, I look up from my writing and say ‘My husband and I are going to Vegas in a couple of weeks. Could you get me a few samples?’

Thank you for reading. If you have any syndromes to share, please let us all know in the Comments. And if you’d like more stories about the Ad World, then and now, click on the tab in the sidebar called ‘Adland Lore’. Here’s a good one about Account Guys: ‘My Head Feels Funny’. For more about what it was like growing up in the Midwest, pick ‘Growing up Lutheran’. And, yes, there’s always ‘Couldn’t Make this Up’. See you next week.

15 thoughts on “In outer space, no one can hear you scrinch”