‘Embracing Working Momhood without (too much) guilt’

It’s been ages since I felt guilty about working. Nowadays, I’m much more likely to feel guilty about not working. You know, whiling away my afternoons on a chaise longue (which Google, for some reason wants to correct to chaise ‘lounge’) in a filmy peignoir, flipping through trashy magazines while nibbling on chocolates bought with The Dude’s hard-earned money. (Actually, my non-working afternoons are more likely to be spent in the company of SoftScrub.)

But, back when The Child was an actual child, I used to feel guilty about working. My guilty feelings weren’t so much about leaving her adorable self in the care of others (though she was pretty darned adorable, as you can see): 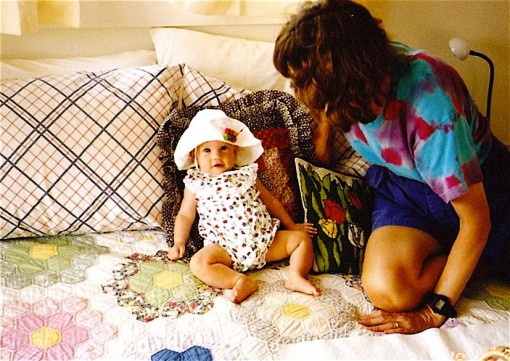 Super-adorable Baby Child, about to be left in the care of Another Person, not her Heartless Selfish Mother (Me)

Nope. My guilty feelings arose because I, um, actually preferred going to an actual workplace and interacting with other adults to hanging around all day with a pre-verbal non-ambulatory person, adorable though she might be. As you may already know from reading some of my other stories, like ‘Gone Baby Gone’, I used to say ‘Hey, if didn’t enjoy getting down on the floor to scribble with crayons before I had a child, what makes anyone think I’d enjoy it now?’

But even I, a Mom Who Basically Preferred Adults, felt pretty bad when I thought about Someone Else being there when The Child took her First Steps or spoke her First Words. (Though I didn’t feel too bad about taking a pass on the First Tantrum.) 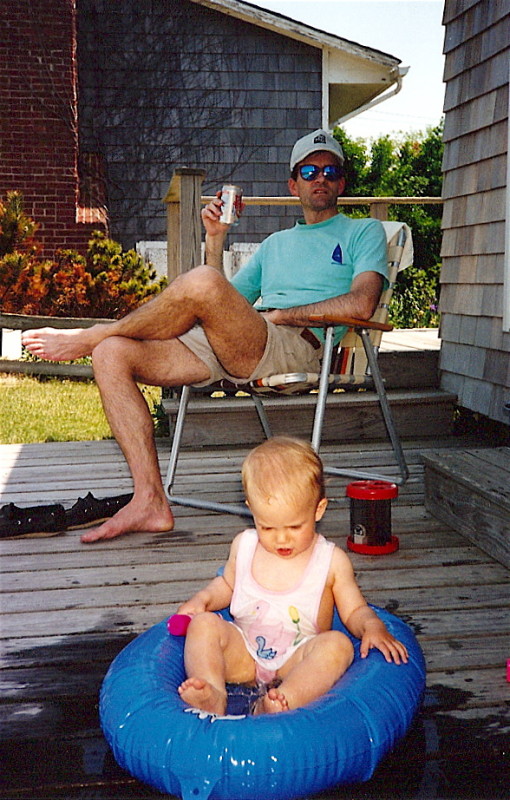 Do Dudes feel Dad Guilt? Not if they’re not working, it would seem

How many times have you heard a Mom say (usually while her kid is clinging to her leg and weeping), ‘Mommy would love to stay here with you, but she has to go to work so she can earn money to buy you food and toys.’

Sheesh. Think how that makes a kid feel. Like Mom could stay home and relax if he or she did not exist. Talk about guilt.

Instead, here’s the advice I read (and tried to follow): Every morning on your way out the door, grab your kid, give her a big squeeze and say ‘Gimme a kiss. I’m going to Work!’ — and say that last word the same way you’d say ‘DisneyLand!‘ (Dads can profit by this advice, too, as you can see by the happy leave-taking photo at the top of this post.)

Try your darnedest to make Work seem like the most delightful place any grownup can possibly go. Because, unless your child grows up to be the Fourth Mrs. Donald Trump, someday she’ll be going to work too. And, trust me, as the parent of a fully-grown gainfully-employed Child (whose birthday is tomorrow), that’s a truly wonderful thing.