‘A landlubber learns to lub the sea. Well, sort of.’

As someone who grew up in the Midwest far from any major body of water — not even a Great Lake, mind you — I have always maintained a healthy respect for the ocean.

I mean, creatures live in the ocean. Big creatures. Sure, lakes have fish living in them. But the odd perch or bluegill or crappie (yes, that’s a fish, pronounced ‘croppie’, in case you were wondering) isn’t really very scary. Unless you’re treading water and one of them, you know, brushes against your leg under the water. Which is pretty creepy. 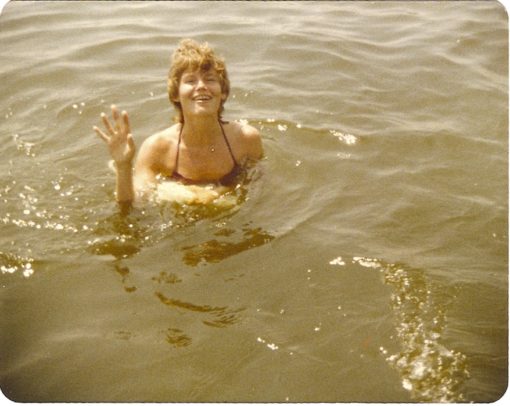 Me, gamely ‘enjoying’ Lake Carlyle. Hoping that a crappie won’t take a fancy to one of my toes. Note that my hair is not even wet

But ‘creepy’ doesn’t even begin to describe how I feel about the creatures who frequent the briny deep. I made this deal with them early on in our relationship — sharks, manta rays, jellyfish, are you listening? — ‘You stay out of my living room, and I’ll stay out of yours.’

I wish I could blame my ocean squeamishness on the fact that I didn’t clap eyes onto (or dip feet into) an ocean until I was well into my twenties. But even before that I was water-phobic. In fact, I think I may be the only person who ever cheated in swimming class. (I refused to open my eyes underwater and ‘counted’ the number of fingers the teacher was holding up by guessing till I got it right.)

These classes were held in the public pool in my hometown well before the afore-mentioned lake even existed. (No I am not that old; the lake is a manmade one and wasn’t ‘finished’ by the Army Corps of Engineers till I was in high school.)

So. Needless to say I hadn’t had much watery practice when I up and moved to New York. I remember going to the beach once with a bunch of brand-new twenty-something ad biz buddies, where I encountered the other thing about oceans, besides the creatures-living-in-them thing. Oceans move.

There I was, wading (safely, I thought) in the shallows, when I noticed my friends’ collective eyes widening and their arms gesturing wildly. I smiled gaily and waved back, when, speaking of ‘wave’, a great big one crashed right on top of me, rolling me around like laundry in the spin cycle. Costing me my sunglasses, my bandanna, my top — and my dignity.

Me in the back of a group of Very Attractive Twenty-Somethings before The Incident. (I know it was ‘before’, because I’m still wearing my top)

Well. Then I met The Dude. Dude Man came from a family completely unlike mine. (Unlike mine in many ways, but I’ll just stick to this one way today.) He not only grew up spending all his summers by the ocean, he had a Dad who insisted that all six of his children know their way around a wave. There are grainy black-and-white home movies showing Whitmore toddlers being tossed like mini-footballs into huge, frothing waves, their tiny mouths open in silent screams. 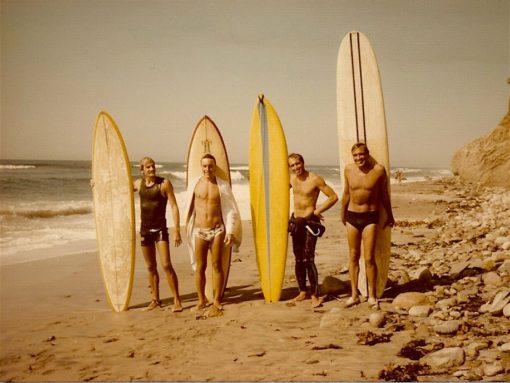 Naturally, once I met The Dude, I wanted to impress him. So, on my very first visit to his parents’ Amagansett retreat (which, incidentally, we now own and is where I am writing this right now) I sort of ‘lutheran lied’ about my experience with the ocean.

He’s like, ‘Do you want to go out in my cousin’s Hobie Cat?’ And I’m like, ‘Sure! That sounds like fun!’ (lutheranliar pants on fire) See, my Middle Younger Brother Roger had a Hobie, and I had in fact ridden on it. But that was on a lake. The Dude clamped me into what I thought was a safety harness. Then off we scooted onto the ocean, where we proceeded to go really really fast with the whole rig tipped crazily — and scarily — on its side.

Well, time, as it is wont to do, marched on. The Child came along and my beach-towel-surfing days were over. Because, even though we weren’t toss-’em-in-like-a-football-and-see-if-they-swim kinds of parents, we did want her to enjoy the ocean. (And not ‘catch’ my fear; though as it happened, she turned out pretty fearless.) So I gamely participated in Water Fun. I remember playing a game called Tsumommi, where we pretended (not so hard in my case) to be scared of the waves while we ran in and around them. 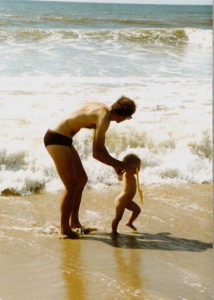 The Dude and The Child get up close and personal with the ocean. Yup, she got that suit for her birthday

We even made up a cutsey, funny term for when you got slammed by a big ole wave. We called it ‘getting crunched’. Here’s a clip from that same adorable video I butchered a couple of weeks ago to show you two little girls picking wineberries. It was shot by my Hobie-owning Younger Middle Brother Roger, and is well worth twenty seconds:

As for me, I still prefer to enjoy the ocean from a nice safe distance. Like, at the movies. Oddly enough, the scarier the Ocean-Themed-Film, the better I like it. Personal favorites include the Mother of All Scary Ocean Films, Jaws. Where (fun trivia fact) those of you who are also Ad Biz Types can glimpse the former Head Creative Director of Ogilvy during the opening beach-bonfire scene. (He was a law student at the time, spending the summer on The Vineyard when he was recruited as an extra.)

But I can also highly recommend The Perfect Storm (George Clooney as a fishing-boat captain!) and my favorite of favorites: Open Water. This is the one about the scuba-diving couple who get left behind by their dive boat. I remember seeing the trailer for this and whispering to The Child, ‘What’s next? Trapped in a car trunk with no air?’ Well, now I own this movie. And watch it, um, embarrassingly often.

I suppose this is one way of dealing with my fears of the water, sort of like kids liking scary fairy tales. But if I wanted to spend Quality Time with The Dude I needed to figure out some way to enjoy the stuff. So guess what? I learned to windsurf. After all, when you windsurf, the whole point is to stay out of the water. I will (finally) end this post with some proof. Enjoy your summer and this short clip (yup, that’s me full-speeding-it-along in the beginning, and The Dude demonstrating a duck jibe there at the end). And be safe in the water. I want to see you here again next week.

39 thoughts on “Getting along with the neighbors”