This morning I got locked in a bathroom. I mean seriously locked in. The kind of locked in where you beat on the door till someone hears you, but, worried that no one will, you actually consider clambering on top of the tank and climbing out the window — except the window has bars on it. Then someone finally does hear you, but that someone doesn’t speak English and it’s ages before a gang of guys comes with tools to break you out.

The bathroom in question was located on the banks of Lake Victoria, on the outskirts of Entebbe, which is in Uganda. Where Idi Amin used to be Head Dude and Dictator. Idi is long gone, but there are still plenty of ways to scare visitors. Like making a bathroom door that locks just dandy but, well, see above.

Once I emerged from said potty prison, unharmed except for a severely wounded dignity, our little Band of Birders boarded (more than a tad belatedly, due to my bathroom emergency) a local boat that was supposed to take us to a swamp so we could search for a rare bird called the Shoebill. My fellow birder/boaters had put the finishing touches on their potty jokes and had arranged ourselves on deck when a gigantic black cloud blew in and our leader, thank the Birding Gods, decided it wouldn’t be safe to continue.

While waiting patiently in an abandoned shelter for the storm to pass, our saintly leader happened to remark that in fact it was a good thing that I got locked in the bathroom — otherwise we would have already left shore — and been out on the open water when the storm hit. Which wouldn’t have been a good thing. No, not a good thing at all. 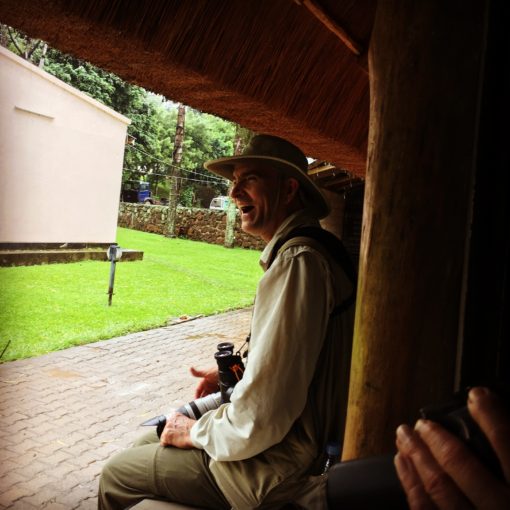 Gimme shelter. Nothing dampens The Dude’s birding ardor. Here he waits patiently for the torrent to subside. Yes, he’s laughing — probably about me getting locked in the bathroom

Anyway. I’m writing this in the Boma Guesthouse, where they do (obviously) have wifi. But it’s getting late in Birder Hours (it’s, like, 9:49!) and I have to get this done so I can schedule it to post tomorrow (yes, you can do that, unless you screw it up, which I’ve done) because tomorrow (usual Posting Tuesday) we’ll be staying in a place that (and I quote) “has seen better days”. I’m doubting it has running water, much less internet.

Yes, dugout canoes were involved. You may recall that this is not my first experience with dugout canoes. This is, um, my third. Once on the Amazon, and once in Panama. In fact, I’ve now been in dugout canoes more times than I’ve been in regular, normal, non-dugout ones. As someone who has never been what you’d call comfortable around water, I’m hoping I can break this habit, and break it soon.

But, as the only way to find this elusive Shoebill was to get into dugout canoes and roam around a swamp, that’s what we did. 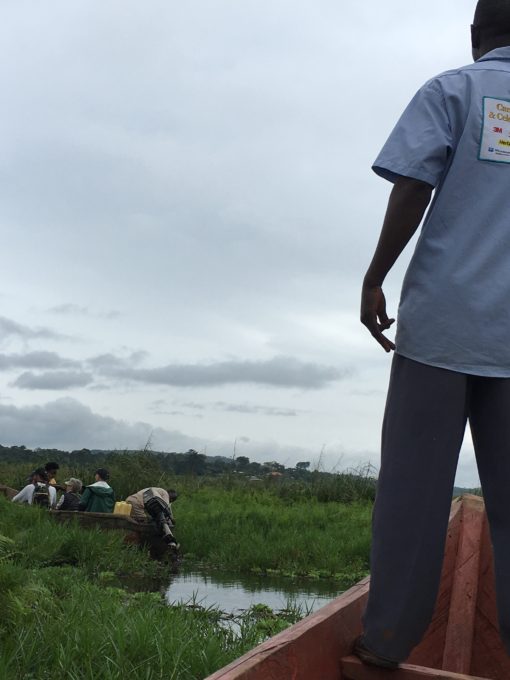 The view from my canoe of one of the other canoes — stuck in the reeds and such. Note that our Boat Guy is standing precariously in the front so he can search for the Shoebill

The canoes had motors, but we couldn’t use them much, because a) it was too shallow, and b) because the boats kept getting stuck in the reeds. When we got stuck (a lot) the Boat Person in the fronts of the boats (see photo for how that guy/gal perched up there, mainly so he/she could scan the horizon for that darned Shoebill) would hop out and push the boat, kind of like the way Charlie, Humphrey Bogart’s character in The African Queen, would hop out and push said African Queen. Only I don’t think our boat-pushers had to worry about leeches. Snakes, yes. Leeches, no.

I know this because our guy got out once to scout ahead, encountered a snake, and soundly beat it with a long pole he kept on hand for occasions such as this. (He also said it came in handy in case he stepped into a ‘hole’ in the swamp and sank in over his head. Which happened. Three times.)

Let’s just say they fudged a bit. Our Boat Guy did have a cellphone, which he used. A lot. Little did we know the other boats didn’t have cellphones. So who knows who our guy was talking to. Maybe his Mom? Anyway, our boats got separated. For hours. And I know I’m prone to exaggeration, but not this time. We were seriously separated for about two hours. Two hours of sort-of paddling, sort-of pushing, sort-of motoring through a swamp.

We, of course, didn’t know our boat wasn’t communicating with the others, and finally decided that if we couldn’t find the Shoebill, it was time to find our way out of the swamp. After about another hour, we emerged, only to see both the other boats filled with fellow birders wildly gesticulating. One was doing so because they had found the Shoebill (!) The other folks were frantically signalling — because their boat had run out of gas. 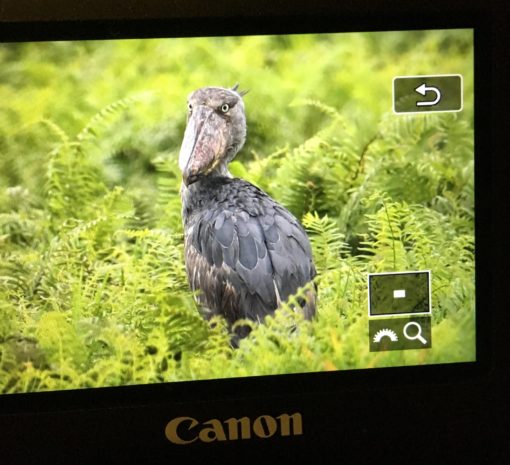 The Object of our Attention, stolen hot off The Dude’s camera: a bird as big as a Volkswagen. Hard to miss, once you’ve found it. But there’s the rub

I’m thinking that the Shoebill was pretty darned well worth the trouble. (I mean, take a look at that thing!) And I’m also thinking that those boater/guide guys and gals won’t get booked again by our Birder Company any time soon.

Near Lake Victoria, Entebbe, Uganda. May 2018

11 thoughts on “Stalking the wild Shoebill”