‘The one (and only) time I swam into an underwater cave’

I’m pretty sure I mentioned that my Bro-in-law Bill stayed with us recently. (He is mentioned — in a good way — in “The House Guest Hall of Fame.”)

It all started when Dude Man had been on the phone with said Bill and announced to me, “Bill and Carol are having work done on their condo in Sarasota and he needs a place to stay while it’s going on. I told him he could stay with us. For two weeks.” 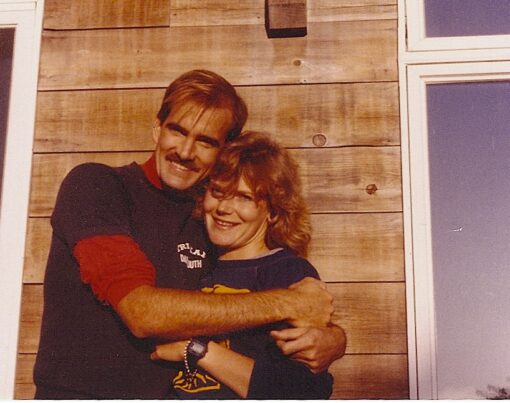 I don’t have a ton of photos of Bill. So here’s one of his brother, The Dude. Oh, and me

Well. I’ve always liked this guy, even though we did get off to a rather rocky start. He’s, um, bossy. But then again, so am I. We had a sort of Clash of the BossyPants.

I chalk it up to us both being Eldest Children. Not only are we bossy, but it’s our way or the highway. Here’s an example. We were lunching en plein air and the wives (Carole and me) had gone on ahead to set things up. Bill sees where we’ve arranged the picnic and says, “That’s not a good spot. Over there — that’s a good spot.”

Well, we did what most people would do — ignored him, filled our plates and dug in — while Bill served himself, then went over to the “good” picnic spot and ate all by himself. 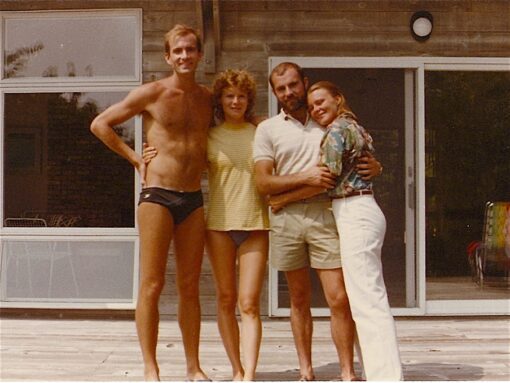 Nope. Bill isn’t in this shot either. That’s Dude Man, me, Joe (who was married to Polly) and Polly, Sis of The Dude

But there is a limit. Two weeks? My mother doesn’t even stay with me for two weeks. So I said he could have two weekends and the week in between. Well, what with him arriving on a Thursday and leaving more than a week later on a Tuesday, he effectively stayed for two weeks, bless his little heart. 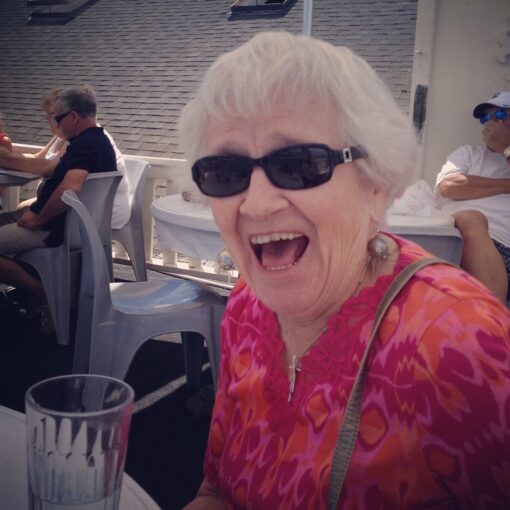 My Mom, during her last long visit chez moi — which was about one week. Mom! Come back! Stay longer!

As things turned out, he was an ideal guest: Didn’t expect to be entertained, didn’t track sand everywhere (thought there were copious quantities of bread crumbs) and loved what I cooked. He was amazed when I did things like wash his clothes. (Don’t be too impressed; I was doing ours anyway.) “Even Carol (his wife, remember) doesn’t fold my clothes!” he exclaimed. 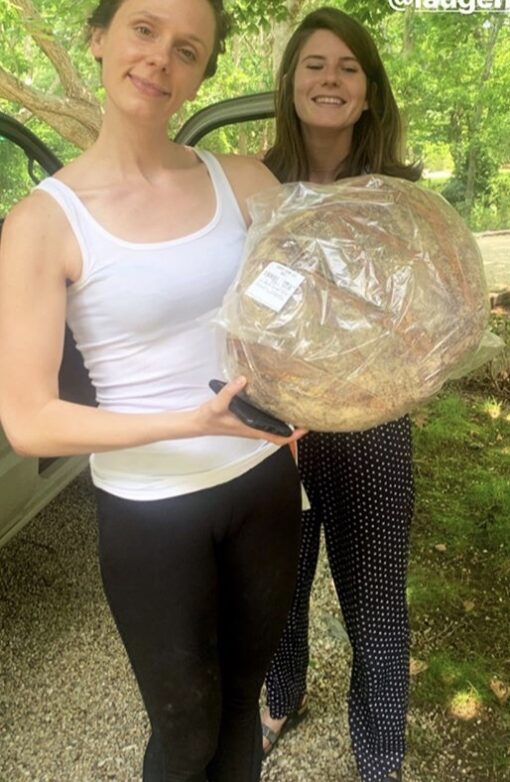 Nope. Neither of these lovely people is Bill, either. But that IS a lovely shot of the bread he would buy — each and every day. And eat it all himself. Seriously

The snarky part of me (which is a very large part, I admit) must point out that we have never stayed in their condo. When invited to Sarasota for a visit, it is assumed — nay, a requirement — that we stay elsewhere. “We’re not set up for guests,” says Carol. 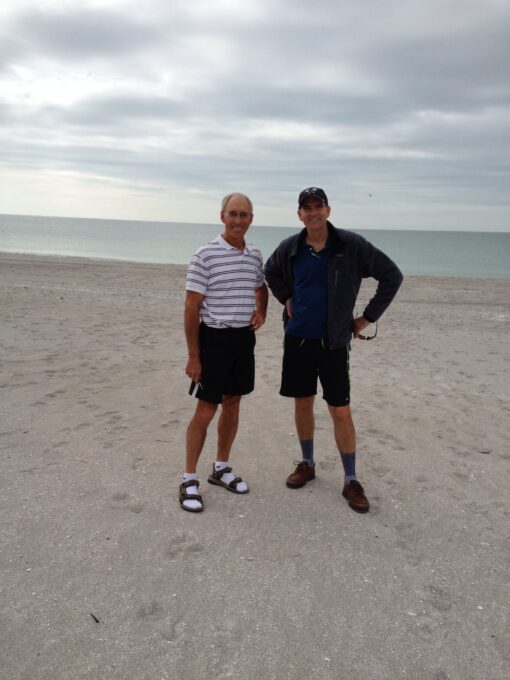 Dude Man and Dude Bro, during out visit to Bill’s where we had to Stay Elsewhere. Note similar bro-wear, including socks

But who’s keeping score? Bill’s almost-two-weeks went well, and besides, there was that one time we were invited to stay on Bill’s boat. And not just stay on it — to use it. You know, sail it around — and without him there.

It was a long time ago, back when my Youngest Younger Brother Doug was a fresh (high school? college? Memory fails) graduate. As it happened, the Dude’s youngest brother was about the same age, and we thought it would be a fun graduation present to take them with us on the sailing trip on Bill’s boat, the Mariposa. (Which means, I think, “butterfly”. (Could have been worse. See this New York Times piece for a funny take on boat naming.) 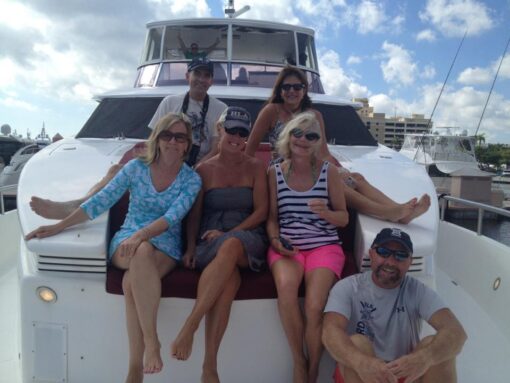 On a boat, on a party. But not Bill’s boat, alas. And no, I don’t know what this boat’s name was. “Party McPartyface?”

Sadly, I have no photos of this boat — except the one at the top of this post, which shows me and Bill on the deck — but I remember this as being a pretty great trip. We sailed around the Bahamas stopping at little islands and beaches and pretty much living the life of Riley — if Riley were a sailor. Oh there were a few glitches; I recall an occasion where His Dudeness commandeered one of my knitting needles to unplug the head. 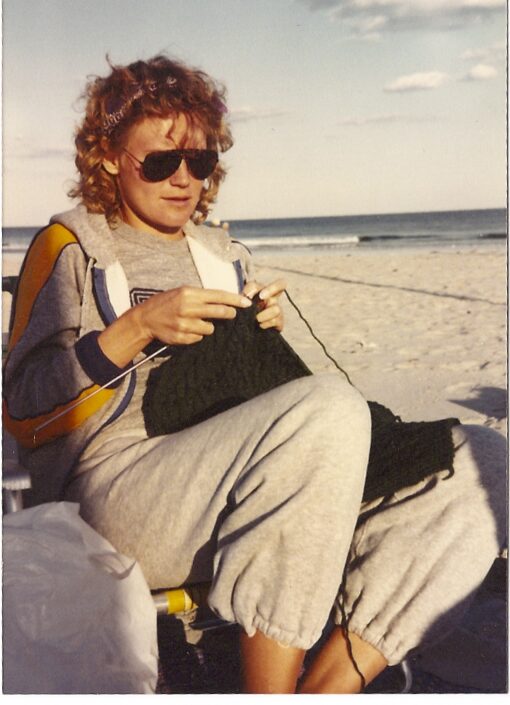 I knit everywhere in those days — on the beach, on the boat. That could indeed have been the needle that doubled as a plumbing tool

I even tried some snorkeling. Those of you you’ve followed me for a while (thank you, Sweet Things!) know that the ocean and I have a healthy respect for each other. That water? It’s someone’s home. I don’t go in their living room; and they don’t come into mine. (See “Getting Along with the Neighbors” for deets.) 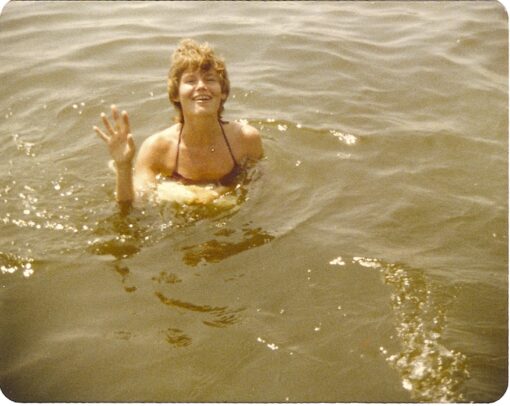 The kind of water I grew up swimming in. Lakes don’t move — much — and only a few bluegill call this one home

So. We’re in the Bahamas. Near the place where they filmed the James Bond movie Thunderball — the one with the underwater cave. Dude Man and the Boys all decided it would be great fun to swim in there. Only thing: you had to swim under a ledge before you emerged in the cave.

I had prepped myself for this excursion by removing my (small in carats, but big in heart) channel-set diamond wedding band. Dude saw me do this and asked why. “Because barracuda are attracted to shiny objects,” I said. “Not something that tiny,” was his retort. 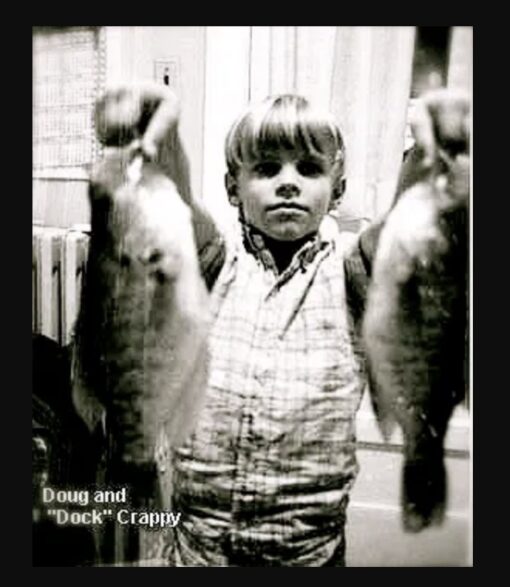 Youngest Younger Bro Doug well before our boat trip. Nope, those are NOT barracuda, but a local fish called “crappy” — or “crappie”

Well. We get to the Thunder Ball cave and I’m, well, not so enthusiastic. I signal that I’ll wait while the Boys swim under the ledge and into the cave. They dive down and disappear. I’m sort of swimming in place when I feel a presence. I look over each shoulder, and there are not one, but two barracuda — each at least four feet long — hanging around, checking me out.

I swam under the ledge and into the cave.