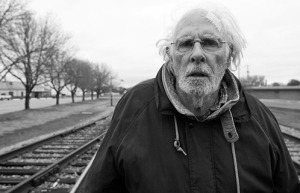 ‘Betting everything on the Sweepstakes’

Poor Bruce Dern. His character didn’t win the sweepstakes in Alexander Payne’s movie ‘Nebraska’. And he — Bruce — didn’t win the Oscar for playing him either. I forget now who did. (Don’t we always forget? No matter how exciting it gets around Oscar time?) But that’s not the point of this post.

I’m posting to tell you about my own experience with a sweepstakes. It was almost as sad as Bruce’s. (That Payne movie is dark, people. Really dark. And I don’t just mean the black and white footage.)

Anyway, back to my sweepstakes story. This was during my Ogilvy Days. As you may know, I worked on a lot of interesting accounts: Hershey, who made yummy chocolates. Kimberly-Clark, who made useful paper products. General Foods, who made, basically, powders (Shake ‘n Bake, Country Time). And then there was the Sweepstakes Company, who made a lot of money selling magazine subscriptions — er — dreams.

I will not name the Sweepstakes Company. Though my blog is new and probably has, like, 13 subscribers, if I name this Company it would be just my luck that Someone Who Works There would read this post and take umbrage. I’ll give you a hint, though: this is the Sweepstakes Company that tells you on the envelope that you may have won $10,000,000,000 — but that does not have a picture of Ed McMahon on it (though everyone gets confused and thinks it does; this confusion, of course, works to their advantage).

Okay. Heaven knows why we had this account at Ogilvy. My personal theory is that the head of the Sweepstakes Company and some bigwig at Ogilvy played golf together. But, for whatever reason, we had the account, and I was assigned as its writer.

Now remember; this is Ogilvy & Mather. The greatest advertising agency of its day! Was the client excited about working with us? Well, let’s just say that the Sweepstakes Company had been doing very well, thank you very much, producing their own advertising ‘in house’.

For the uninitiated among you, ‘in house’ means that there were people who worked in the Sweepstakes Company’s very own Advertising Department. Which meant that they were accustomed to coming up with the advertising themselves and — this is the fun part — producing it themselves. (‘Producing’ means making a lot of fun decisions, like who gets to be in the commercial and where do we shoot it and who gets to go to the actual shoot, where you sit in a director’s chair and eat all the breakfast burritos and M&Ms you can handle. So ‘producing’ is cool, very cool indeed. And a function not parted with without a fight.)

So this means that the client (who wore an ascot AND a cowboy hat) hated us on sight. We hadn’t even opened our mouths at our first presentation when he had his head in his hands, moaning ‘Ogilvy Ogilvy Ogilvy’. We did our best, tap-dancing through storyboard after storyboard. No luck. We were sent back to the drawing board to do all new work because ours ‘wasn’t creative enough’ and would be ‘too expensive to produce”. (After all, breakfast burritos cost money.)

So my art director (an enthusiastic mustachioed man named Gary who sported a leather hat; funny how hats figure in this story) and I came up with a whole slew of ‘more-creative-yet-cheap’ ideas, of which we were very proud (or at least as proud as you can be of commercials for a magazine-subscription-sweepstakes company).

We go to the client’s Long Island office, all fired up for the presentation. We do our best to melt the stone faces in the room (especially the granite face under the cowboy hat and above the ascot) and present our little Ogilvy hearts out. We think we’re doing okay (at least not dying out there), and after several pretty nifty ideas, we come to our grand finale:

Creative, check. Cheap, check. Guy-with-the-Leather-Hat and I are mentally congratulating ourselves at this point. I mean, aside from meeting the brief, we even liked it. So we look to Cowboy-Hat-Ascot Man for what-should-be-certain approval and accolades, and hear:

Air out of (mental) tires. Client out of door.

But back for a moment to that last line: ‘Somebody’s gonna win’. Somebody always actually did. Usually they won smaller prizes. And the government certainly took their cut. But still. Winning money, though maybe not ‘funny’, was occasion to celebrate. So celebrate they did. The Sweepstakes Company would gather the winners for a festive meal called, I kid you not, the Winners Dinner. The Winners, of course, were invited. So was the agency team. Including leather-hat-guy, and me.

And guess where it was held? Windows on the World.

The Child told me not to mention this. But it is the reason I thought of this post, and thought of it today. So I’m taking a chance and hitting the ‘publish’ button, hoping none of you will think it in bad taste. And hoping that none of you work for the Sweepstakes Company.