‘Show me a kid who grows up playing games, and I’ll show you a grownup who knows how to play games.’

If you have the good fortune to have access to the New York Times on Sunday (forgive the local journalistic boosterism), then you may already be familiar with a feature called ‘Sunday Routine’. New Yorkers of all stripes, including Jim Grant (better known as Lee Child), are asked about their, um, Sunday routines. Heady stuff.

Most of the New Yorkers profiled here, interestingly enough, do much the same as me and everyone else on a Sunday: read the paper, and drink coffee. (‘Lee Child’ drinks even more coffee on Sunday than I do, and that’s saying something.)

Well. I was giving this week’s piece (about some landscape designer or whatever) a perfunctory skim when I noticed her saying that her son wakes her every Sunday with a demand to play ‘Sorry!’. I felt an immediate connection with Whatshername, even though she’s decades younger and lives in a row house in Queens. And it was all about that demand to play a game.

When I was a kid — and even when The Child was actually a child — games were a big deal. I don’t, alas, have photographic evidence, but I swear on a stack of Scrabble dictionaries that we did in fact play hours and hours of Sorry! Also Clue (Miss Purple in the library with a candlestick, anyone?) and Monopoly. (I liked to ‘be’ the iron, for some strange reason.) Board games were big. Very big. And, of course, there was Scrabble. But before I get into Scrabble, let’s talk about cards. 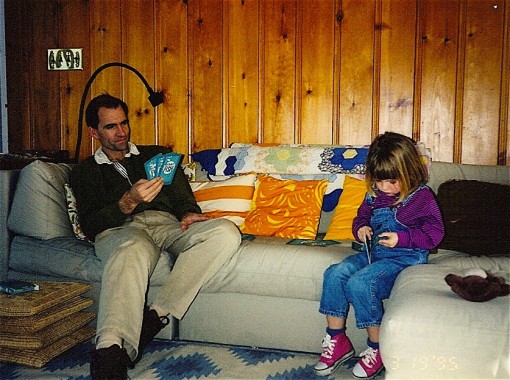 Card Shark in Training. The Dude and The Child get into a game of Go Fish

Even before we Henry Kids were old enough to play cards, we would watch The Adults play. Trust me, you can pick up a lot of juicy stuff watching your Grandparents and Uncles and Aunts sit around a big kitchen table playing variants of poker like the kind where you hold a card up to your forehead so everyone can see it but you (‘Indian Poker’, natch). Even after we youngsters were banished to bed, we would gather around the heat register — basically, a grille cut into the floor to allow heat from downstairs to get to the unheated upstairs — to listen in. (Very little ‘heat’ went up those registers, but adult conversations drifted up there just fine.)

Cards go way back in Family History. Here we see the Henrys deeply involved in poker. And maybe some plum wine

But I do have that swell photo at the top of this post that shows a Scrabble match from many Christmas Eves ago. That’s my mom standing there tallying a word score, my Aunt Shirley in the foreground plotting her next move, and my Champion Scrabble Gramma on the right hiding her glee. Oh yes, that’s me in the middle with the rather unfortunate hair.

My Gramma always won at Scrabble. She was so good at it that it’s a wonder she could find anyone to play with. Maybe it was the treats. Best thumbprint cookies with jam in the ‘thumbprint’ on the planet. Though there was also the lutefisk to contend with. (See my stories ‘Proof that Swedes are geniuses’ or ‘The Fruitcake Gene’ for fishy details.)

Oh, incidentally, my aforementioned Uncle Ron was not a Scrabbler. Like my Grampa Peterson, he claimed he ‘couldn’t stand the excitement’.

Anyway. I remember one Christmas Eve in particular. We’d just about decimated the fruitcake (Yes, there are people who actually like fruitcake. I got the Fruitcake Gene, so did Scott. But just we two sibs, I’m thinking), and it was getting late. Santa (one of my uncles in a wouldn’t-fool-anyone-over-five red suit with a pillow in it and a white cotton-wool beard) had come and gone. Gramma’d just trounced us for the umpteenth time when Aunt Shirley suggested we call it a night. At this, Gramma looked around the table and said, ‘We could play another game.’ This was at, I kid you not, 4 AM. As Mom puts it, time stands still when Scrabble enters the picture. (And, um. I bet you can guess who’s taken on Gramma P’s Scrabble mantle.)

Speaking of Scrabble (and I bet you never thought someone could speak of Scrabble so much) my Dad was really good at it too. But that’s because he cheated. He was one of the best Game Cheaters I ever knew. We kept the Scrabble letters in an old Folger’s can, and he would reach in and feel the fronts of the tiles and pick out only the Js and the Zs and Qs (and the Us to go with the Qs). 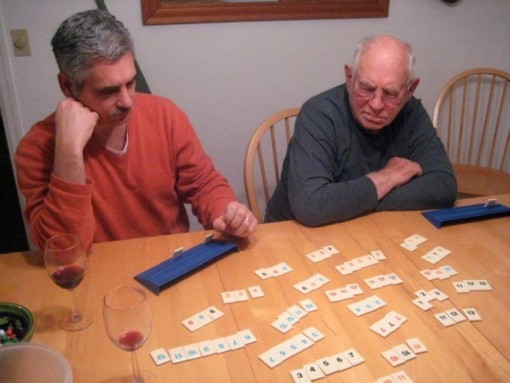 Another game Dad was good at (cheating in). This is Rummikub. Scott says Dad would turn the 6 upside down to make a 9 when it suited him. (That’s Best-Bro-in-Law-on-Earth Dave getting creamed)

Well. As you can see, I could go on and on about games. But I’ll stop now. And leave you with this thought. As the days grow shorter and the Holidays loom closer, think about dusting off that deck of cards or those board games. Trust me, you’ll have tons more interactive Family Fun than you would with a barrel of touch screens. You won’t be sorry. Unless, of course, you’re playing Sorry!

20 thoughts on “The Smarts against the Dumbs”