‘In The Heights On Christmas Day’

“It’s not rational,” I said as I lamely tried to explain my fear of heights to my pretty-much-100%-fearless son-in-law. “It’s emotional. Visceral, even. I react to a cliff the same way I’d react to, well, a snake.”

“You’re scared of snakes?” was his befuddled reply.

Well, yes. As you know if you’ve read my piece “The Year of the Snake,” I have a very well-developed (and healthy, in my opinion) fear of snakes. A fear that I have yet to conquer.

But I’ll have you know that this Christmas I faced my fear of heights in fine fettle. By hiking the South Kaibab Trail in the Grand Canyon. Without fainting or shaking or cringing. Much. 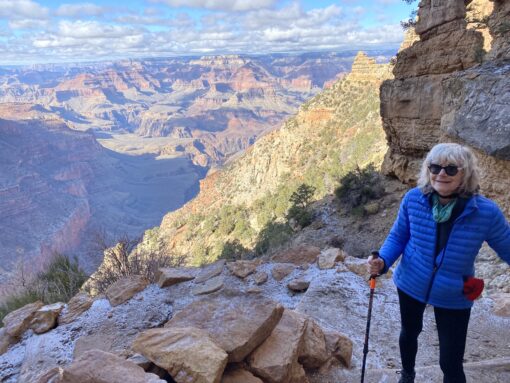 Me, not shaking all that much, pausing to gloat on the Kaibab Trail

Sure, I didn’t hike the whole trail — it’s seven miles all the way down. But, for a person who can’t even stand on the top rung of a ladder to change a screeching smoke alarm at three in the morning (see “Things That Go Shriek in the Night”) climbing down — and back up — a mile of steep, icy, rocky switchbacks is a pretty darned proud-making accomplishment.

It all started Christmas morning. “Hey, it looks like a great day to visit the Grand Canyon!” was The Child’s delighted cry after opening presents. “We’ll do a Christmas hike!”

I didn’t object, but, needless to say, I didn’t join in the general glee. And I was quiet on the almost-one-hour drive from Flagstaff to the South Rim. Too quiet. 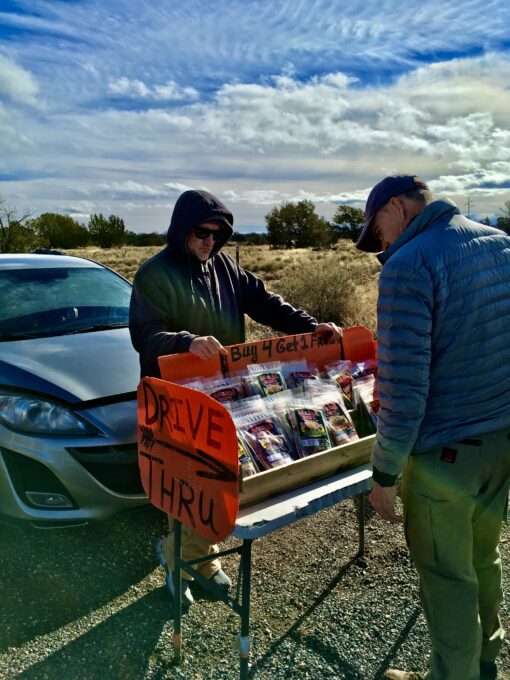 The rest of our carload sang along to country music and nibbled on snacks while I quietly composed my eulogy. All too soon, The Child shouted, “Look out to the left! There it is: the Grand Canyon!” And yes. There it was: magnificent, massive — and oh so very very deep. I’m glad no one took my picture. 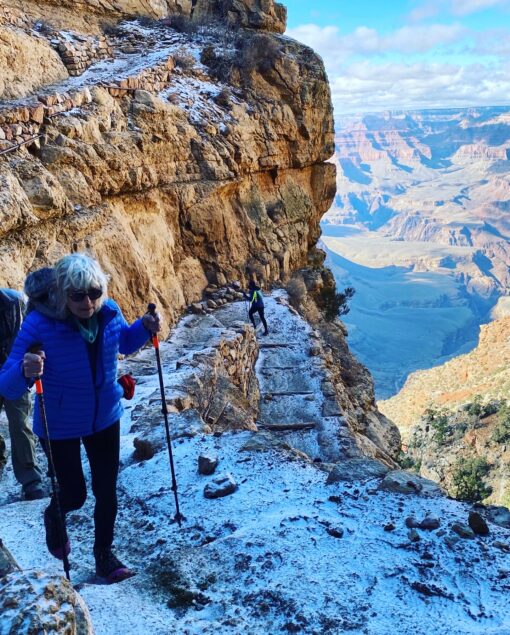 Of course these wacky kids had no fear at all of hiking down the Kaibab Trail. Hell no. They’d already run down that trail. Then across the Canyon floor, up the other side, back down, back across the Canyon floor and right back up to where they started. It’s a Thing called the Rim2Rim2Rim, and yes, both The Child and The SIL have done it. Three times. Their adventure’s here in “Deeds of Derring-Don’t”. 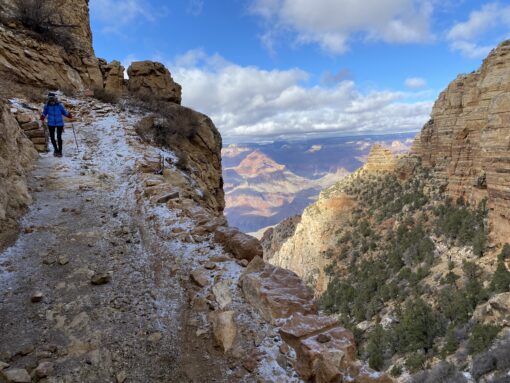 Can you imagine running on this trail? I didn’t have to imagine it; I watched the SIL do it. Seriously. He just took off — and ran

My fear-conquering method? Nothing fancier than not wanting to be left in the parking lot while Her Childness and Spouse and Mr. Dude all went trail traipsing. Oh, and once I started I didn’t look at anything except my feet. No gazing out at the glorious views for me. I glued my attention to my boots until I got into the swing of things. And, by golly, it didn’t take me more than a couple of switchbacks before I was free-soloing along like a seventy-something Alex Honnold.

Like I said, our little foursome only hiked down a mile. To a place called Ooh Aah Point. Then we turned around and hiked back up. Which (for me, anyway) was actually easier, since being out of breath was less crazy-making than the fear of slipping on all that ice. 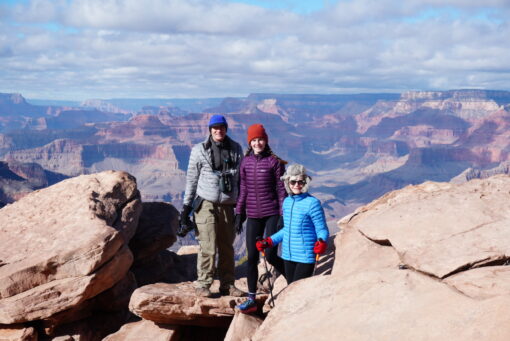 Our happy band at Ooh Aah Point. (SIL is missing since he’s the one taking the picture)

Once we were done we were so exhilarated that we drove along a bit to the place where The Child and The SIL took the plunge in May. (Which you can read about in “Runaway Bride.“) I was emboldened by my success on the Kaibab to venture out to the actual Wedding Vow Site. But I could not be convinced to clamber onto the vertiginous location of several other wedding shots. 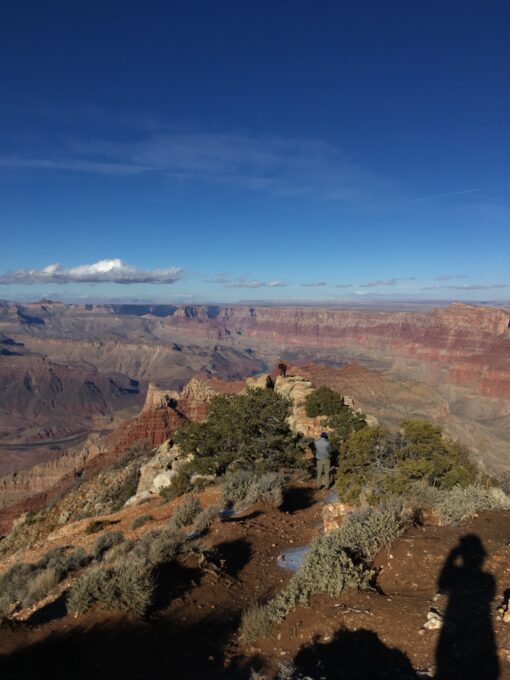 Revisiting the Scene of the “Crime.” Look closely and you’ll see two teensy figures far off on that outcrop. (That’s my scaredy-cat shadow in the foreground) 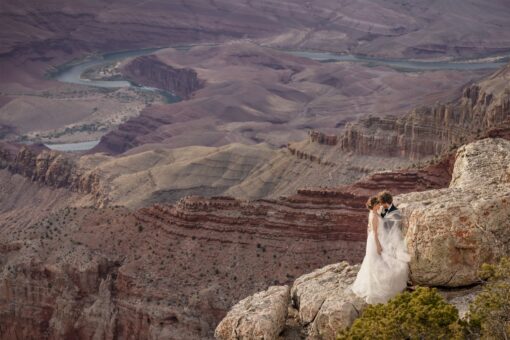 Same outcrop, but with Newlyweds perched on top

Yes, our Flagstaff Christmas was pretty darned slick. Literally. And, as for me, I’m still pumped with joy — and adrenaline. Maybe next Christmas I’ll tackle my fear of snakes. 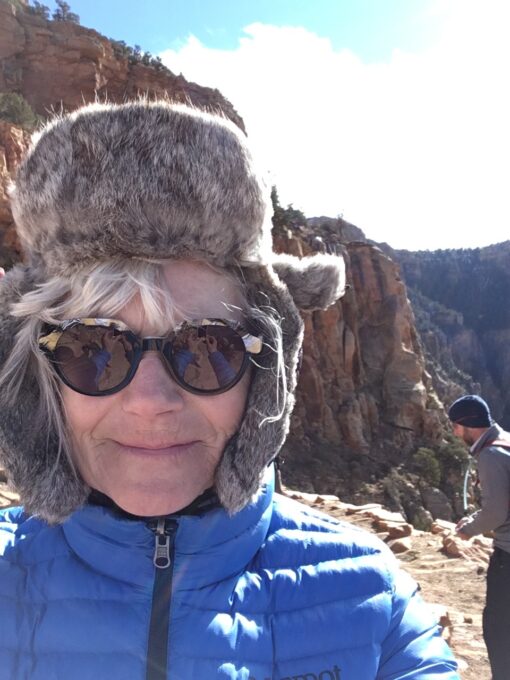 Me, feeling pretty smug about making it up and down that trail. But snakes? Not on your life

2 thoughts on “Taking motherhood to a whole new level”