‘What you don’t know can hurt you.’

A couple of years after The Dude and I got married, we took a trip to Australia. This was a very long time ago. So long ago that when I googled ‘Crocodile Dundee’ after coming up with that groaner of a title, I found out the movie came out after we took our trip. So we weren’t familiar with lines like ‘That’s not a knife…this is a knife’, much less with the fact that practically everything in Australia can pretty much kill you.

Speaking of my punsterific headline, let me say right off the bat that I don’t mean to pick on The Dudeman. It’s just that the photo of him in his Crocodile hat looks, well, more ‘DundeeLike’ than mine. 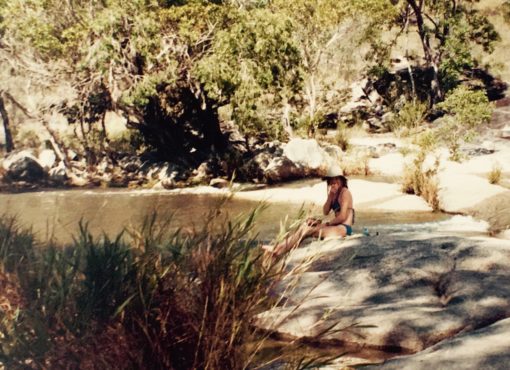 Me, sporting my Crocodile Dundee (er, ‘Dumdee’) hat. And not much else. I’m perched by the pool that had all the snakes in it, soon to be described in horrifyingly hissy detail

Because, let’s face it. We were both pretty dumb on this trip. Granted, this was long before TripAdvisor or (probably) even the internet itself. (Not sure; I’ll have to ask Al Gore.)

At any rate, we were young, we were naive, and we were game for pretty much anything. We were also pretty poor, but I had oodles of frequent flier miles from all my work-related plane-hopping for Ogilvy. (See ‘Around the World in 80 Shoots’) So we cashed ’em in and flew Qantas to Cairns. Where, before we could even grab a rental car, we were ourselves grabbed — right there in the terminal — by a couple of guys who said “Hey, wanna go diving on the Great Barrier Reef? Come with us!” (Use your imagination for the Australian accents.) 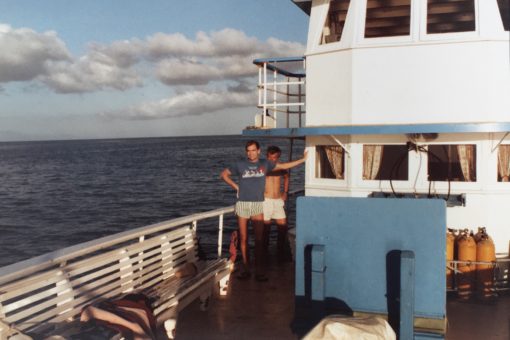 No, we didn’t buy the Brooklyn Bridge. But yes, we did hop right on this dive boat

Nope, we were not certified divers. In fact, I had never even tried diving before. But we strapped on that gear and dove right in. There are still marks from my fingernails etched into that boat’s wooden sides. END_OF_DOCUMENT_TOKEN_TO_BE_REPLACED