I have several friends who are grandmothers now, and they all pretty much agree that it’s a pretty sweet gig. They get to read stories, sing silly songs, play ‘Sorry’ and ‘Go Fish’ — all with cute little kids that they then get to give back to their parents who just ten minutes ago were little kids themselves. 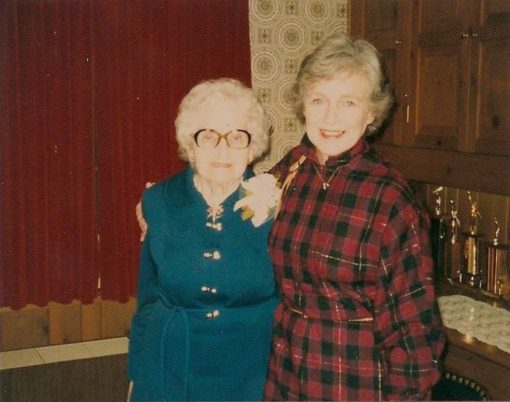 The one thing they can’t agree on, though, is what to be called. I know a Nonna, a Nanna, a Nanny, a Mimi and a Gigi. And I’ve heard tell of MomMom and G-Ma. (Hmmm, that last one sounds a tad X-rated, if you ask me. But maybe that’s why it’s popular.)

Now, perhaps there were let’s-call-ourselves-something-else trailblazers back then, but when I was a kid, grammas were mostly called “Gramma”. It was actually spelled “Grandma” if it was written down, like when we wrote letters to them. But when we said it, it came out “Gramma.” (Yes, we wrote letters. When my Gramma Peterson died, I got a big envelope in the mail; it was every single letter I’d ever written to her — she had saved them all, including the first when I was about six and a multi-page tome I’d written her from my honeymoon.) 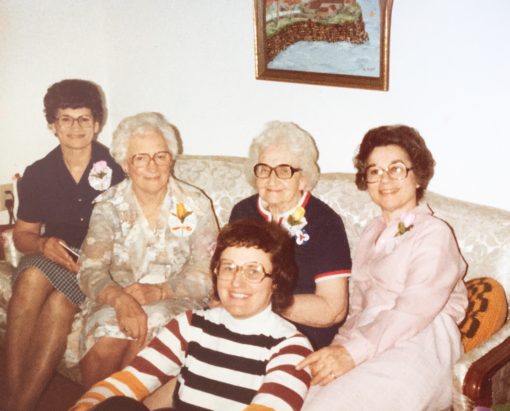 My two Grammas, inhabiting the same space at the same time, flanked by some daughters (my aunts). The Gramma on the right is the one who saved my letters

And, again like most kids, I had two grandmothers — just two. Come to think of it, maybe the reason grandmothers today search for unique Gramma Names is because their grandkids would have a hard time calling them anything what with multiple marriages — and multiple grandmas — being so common and all. I personally know a “Gramma Carol”, who is The Dude’s Older Brother’s Wife’s moniker because the grandkids already have another “Gramma” on his side of the family. Who is his ex-first-wife and the mother of the kid’s dad. Whew! (But at least she’s “Gramma-Plus-First-Name”; I don’t think I could look her in the eye and call her, say, “MeeMaw”.) END_OF_DOCUMENT_TOKEN_TO_BE_REPLACED