I know, I know. It’s Christmas Season. And has been since around Halloween, it seems. And while I like the tinsel and the lights and the music (well, except for ‘Little Drummer Boy’) and, most of all, the sensationally savory scent of evergreen, I’m just not quite ready to let go of Thanksgiving.

For one thing, I have a big ole pot of turkey soup to ladle out. But that’s it for leftovers of the edible kind. Absolutely nothing else is left: not the stuffing, not the mashed potatoes, not the non-powdered-sugar gravy, not the cranberry sauce. And especially not the pies. Which were basically gone by breakfast on Black Friday. (Incidentally, I like to think it’s called ‘Black’ Friday because everyone is sad because the pies are gone.) 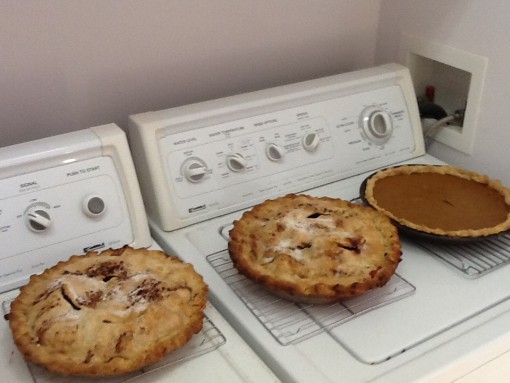 Pies, while they still existed. Left to right: apple, cranberry-apple, and pumpkin. In the Pie Keeper, AKA the laundry room

And for another thing, END_OF_DOCUMENT_TOKEN_TO_BE_REPLACED