‘Yet another trip down my personal Memory Highway’

It might be only a tad wider than a sidewalk, and just over a mile long, but The Seaside Promenade — lovingly dubbed ‘The Prom’ — is jammed with traffic. Memory traffic; for me, that is.

As you Faithful Readers know all too well by now, I was raised, Midcentury-Modern-style, in a small town in the Midwest. It was a nice enough small town, but as it happened, all five of us Henry Kids scattered to the four corners of the country pretty much as soon as we could get our respective acts together. 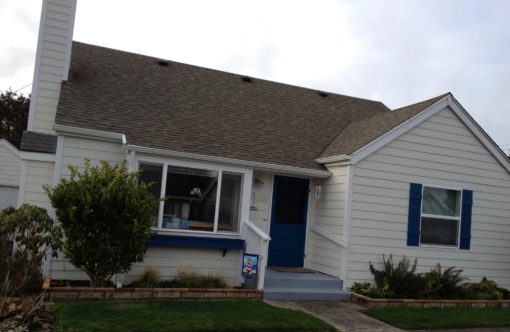 The small-towny, rather Carlyle-esque house where my parents lived in Seaside

And, a decade or so after the last of their brood flew the coop, our parents too pulled up stakes (I’m dizzy from mixing metaphors here) and relocated to Seaside, Oregon, an unassuming small coastal town that one of my beloved-and-hilarious Younger Brothers immediately christened “Carlyle-by-the-Sea”. 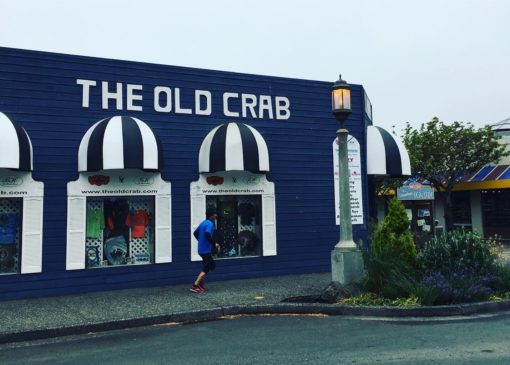 We had an Old Crab or two in Carlyle, too

Similarities? Lutheran Church with coffee hour: check. Library where they forgive an overdue book (or two or five): check. Neighbors who don’t mind if you “drop in”: double check. Plenty of local character(s), too. Carlyle had Skinny Man and Skinny Lady and That Guy Who Rode His Bike Everywhere (when I was a kid, a bike-riding Grownup was definitely considered a “character”); Seaside had Bubble Man. This was a guy who rode a bike-like contraption that spit out bubbles. I never actually saw him, but my brothers swear that he existed. 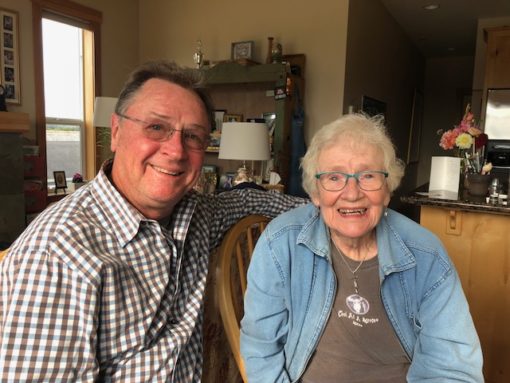 Just like home: Carlyle HS Buddy Dan drops in on Mom for a Seaside chat

But Seaside has something that Carlyle, even with its Corps-of-Engineers-dam-and-Illinois’-Largest-Lake, just doesn’t have: the Pacific Ocean. And with that Prom running right alongside. 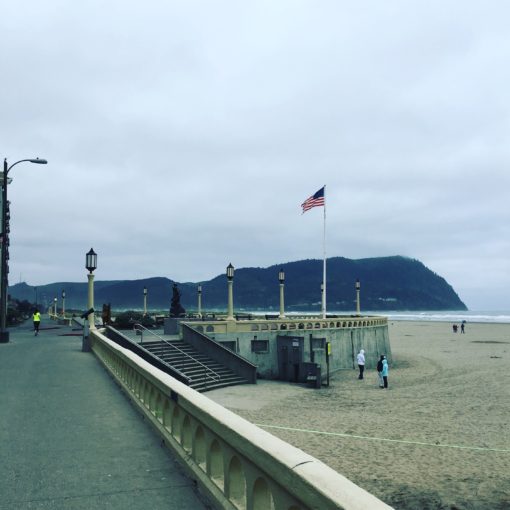 My parents loved that Prom. My Mom still gets out there every day (every day when it’s not doing what she calls “sideways rain”, that is) and walks it. Even my Dad, who notoriously hated walking — he would drive to his office when they lived in Carlyle; and his office was literally across the street (“Why don’t you walk, Dad?” “I might want to drive somewhere once I’m there.” “Oh.”) — even my Dad could be induced to give The Prom a stroll now and then. (Though my Mom and I had a sneaking suspicion that he did this so he could sneak a cigarette, speaking of “sneaking”.)

Both Dad and Mom also rode bikes along The Prom. Once a cop stopped Dad because he thought he was riding stolen property. But nope; turned out someone else in Seaside had a bright blue three-wheeler. 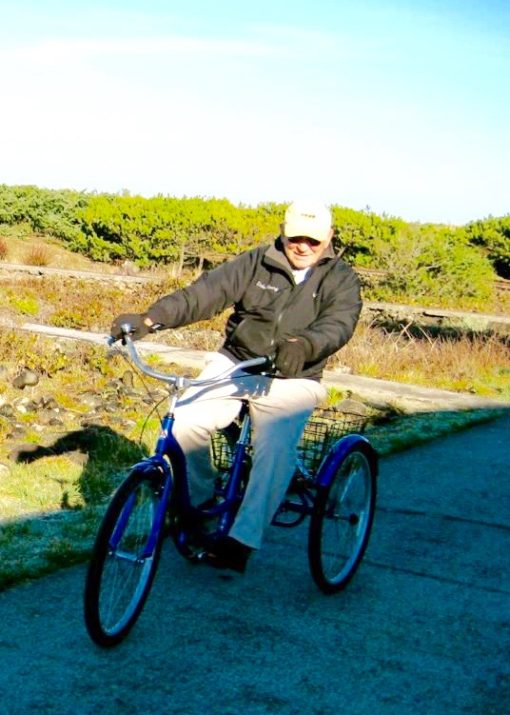 One of two identical blue trikes in Seaside. This is the one with my Dad on it

And once when I was on a Prom stroll, I met my Mom coming from the other direction on her (regular, two-wheel) bike. She motioned me to stop. “Hey, there’s a naked couple playing cards right by the window in that motel up ahead,” she stage-whispered. And, sure enough, there was. 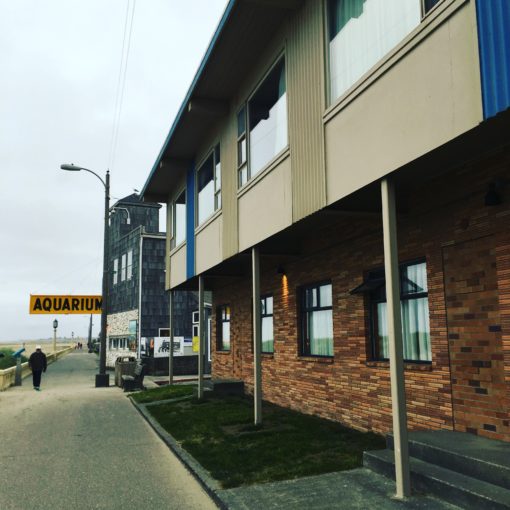 The motel where the naked couple were playing cards. Bricked-up doors, but curtains that definitely do open

I’m pretty sure this was the same motel where the lady stayed who kept her horse tethered right outside. But it might have been another one a bit further on. Seaside has dozens of motels, including one boasting of a “Heated Indoor Pool” with water the color of soy sauce. Yes, you can see it through the window.

There’s plenty more to see on The Prom, and not just through windows. There are adorable pail-and-shovel-toting children galore, and hand-holding couples of all ages, most sporting every type of tattoo imaginable (the couples, not the adorable children; though one can’t be sure). And I think it’s a local law that Prom-strollers be accompanied by a cute dog. 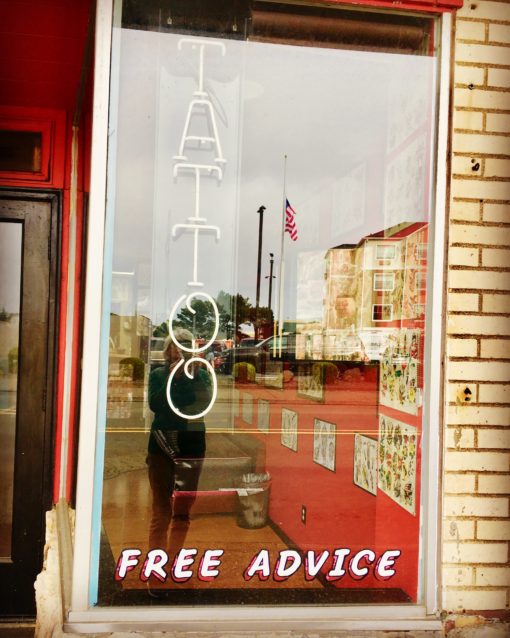 Forgot your tattoo? No worries; you can get one here — along with “Free Advice”. My advice? Don’t get a tattoo

There’s this place midway on The Prom called the “Turnaround”, because, well, that’s where all the cars have to turn around, the road ending at the ocean and all. There’s a statue of Lewis and Clark there because that’s where they had to turn around too, the trail ending there and all. (The whole Lewis-and-Clark Thing is fascinating — Cape Disappointment! — remind me to tell you more another time.) 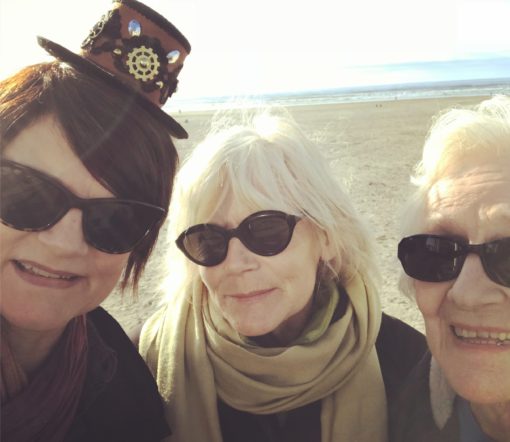 “She had a hat.” Selfie Time at the Turnaround

On any given day, there’s lots going on at the Turnaround. Once The Child and I were the only ones dancing to a street band. And another time my Mom and Favorite Sister and I had to jockey for selfie space with a gaggle of Furries. 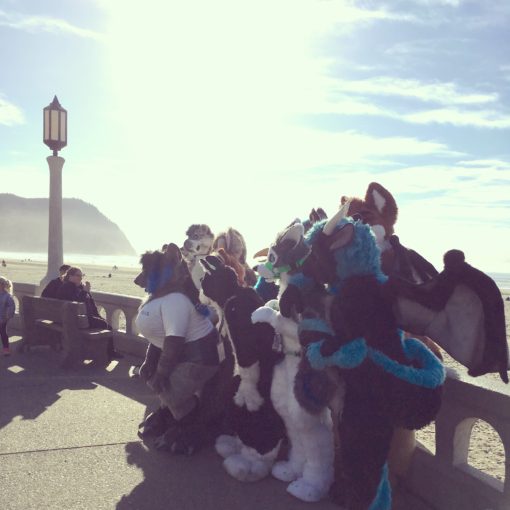 Smile and say “fur!” A group of Furries at the Turnaround

But, basically, The Prom, including its Turnaround, is all about the Pacific Ocean and that incredible view. Here, in closing, is a 360 taste. This was shot just a few days ago from the relatively quiet, non-Furry-and-street-band-infested end of The Prom. And already, like everything else I’ve told you about here, it’s a memory.

10 thoughts on “Strolling The Prom”