‘I become a Blazers Fan. For a few days, anyway.’

There’s a scene in a Woody Allen movie where Woody’s character is making nervous small talk with a woman on their first date. He asks her what her favorite sport is and she says “swimming.” “Swimming?” he sputters. “Swimming? Swimming isn’t a sport. Basketball is a sport. Swimming is what you do when the boat sinks.” 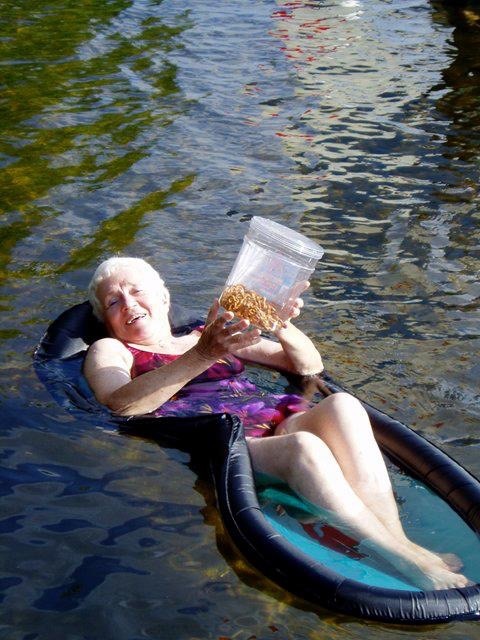 My Mom, ready to swim. ‘Cause it looks like that raft’s ready to sink

Well, I was always kinda with the date on this one. I’ve never been that into team sports. Not even when I was at the University of Missouri, which was, and probably still is, a Big Football School (Mel Gray and John Matuszak ate in my cafeteria). I used to gamely sit in the bleachers with my eventually-to-be-First-Husband-the-Frat-Boy, guarding my nylons from splinters, corsage pinned to my insubstantial breast. Surreptitious sips of Mad Dog 20/20 helped. Sort of.

That was the sport with the pointy orange ball. As for basketball and its bouncy round orange ball (see an example in the photo at the top of this post, being held, pre-bounce, by The Child), I actually got off to a good start, playing H-O-R-S-E with my brothers around the hoop perched over our driveway. But then my bros got so they didn’t want to play with “girls” — or, to be fair, maybe it was me who didn’t want to play with “boys” — at any rate, around sixth grade it was no more H-O-R-S-E. And for me, no more basketball. 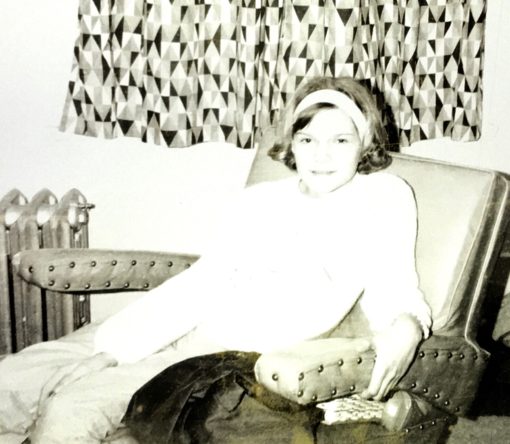 Me, at about the age when I thought I was too cool for H-O-R-S-E

There was plenty of basketball at my high school, but only boys played it. If you were a girl, basketball meant trying out for cheerleader. And, not only was I totally inept at the fancy footwork involved in “cheering” (have you ever tried to do a cartwheel?) but I simply wasn’t the Cheerleader Type. I mean, I was reasonably attractive and all, but cheerleaders had cute little figures and were perky and bouncy. I didn’t have a perky bouncy bone in my lanky gawky body. 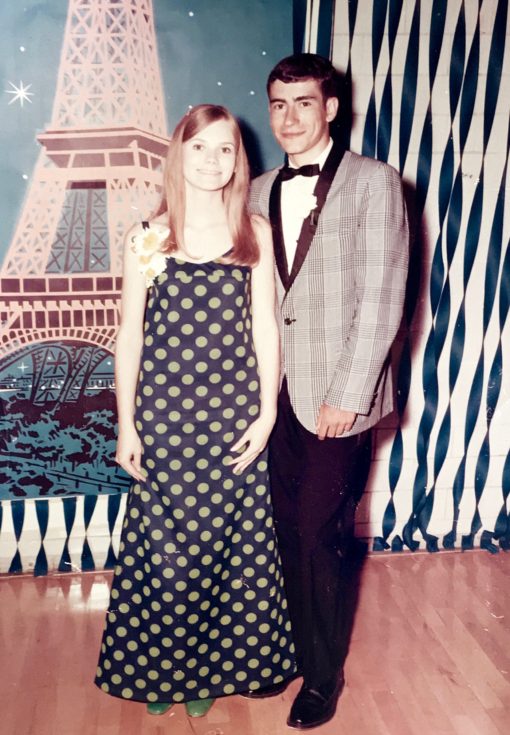 But hey. I was cute enough to snag a hunky prom date. A date who was on the basketball team, I’ll have you know. (Yes, I made that dress)

So. Where was I going with this? Ah, the Blazers. Actually, they are called the Portland Trail Blazers. And, not to get all sportscaster on you, but when I was out west visiting my Mom for Mother’s Day, the Blazers just happened to be duking it out with the Denver Nuggets for some Big Championship which would mean they would then vie for the NBA title. (Whew. I feel like I’m channeling Howard Cosell.)

So, of course we watched. And I must admit it was exciting. Maybe not as exciting as swimming for your life because your boat just sank, but exciting nonetheless. There was deft ball handling, cool three-point shot-making, and even — with two brothers playing against each other (the Currys) — Family Drama. Speaking of Family Drama, my Lovely Niece Emma made a video of we three moms (me, my sister, and our mom) noisily getting our Blazers on:

I seem to have a knack for showing up for a Mom Visit when there’s some exciting Big Deal Team Sport Event going on. Like the time I innocently traveled west for my Mom’s birthday, only to find my visit coincided with the Chicago Cubs’ run-up to their history-making World Series victory. 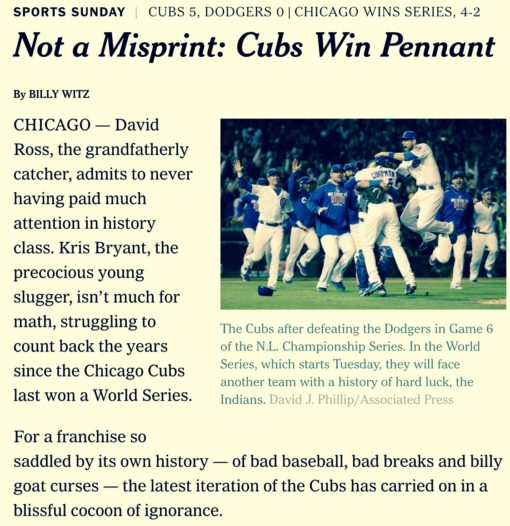 Yup. They won. But we didn’t know this was going to happen when I was visiting. It was pretty tense around that TV

The presidential debates were also on TV — remember Trump looming over Hillary? — but no Henrys seemed to care. It was all about baseball and the Cubs. I did manage to sneak off and watch a debate on my iPad, but basically, that visit was a crash course in baseball’s finer points. (Baseball is the one with the smallish non-pointy white ball.) After watching a few of those playoff games, I was talking “double-play” and “pinch-hitter” and “closer” with the best of the Henrys. I even had a Favorite Player (Javier “Javvy” Baez). 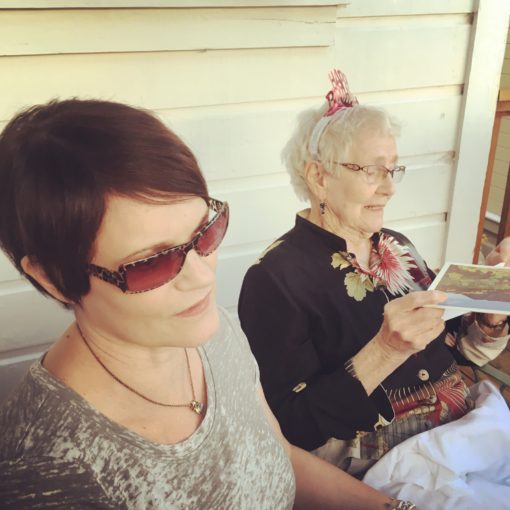 Mom’s Birthday, the year she got gifted a Cubs World Series win

And do I have a Favorite Spectator Sport? Yes indeed. It’s the one played with the small fuzzy yellow ball. Not only are there no teams involved, in my mind there is only one player. And he’s playing right now in the French Open. So, in a weird way it’s good that the Blazers flamed out, since I wouldn’t be able to pay them any mind. Because when Roger Federer is on, everyone else takes second place. 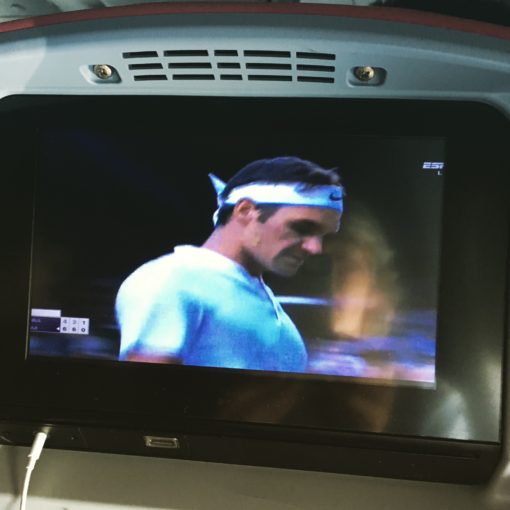 The One and Only Fed at Wimbledon a couple of years ago. I was watching him play while on a flight out to visit — you guessed it — my Mom

18 thoughts on “Nope. It’s not the sport with the pointy orange ball”