‘You should have been here yesterday’

First things first. Yes, yes. I know that the picture at the top of this post is not of a leopard. (Though leopards, not lions, according to our Amazing Guide Donald, are the cats one expects to find draped in trees. Though only one at a time. Leopards, apparently, are loners. Lions like being with other lions. There were actually two more lions draped in this one tree. I just couldn’t fit them into the picture.) 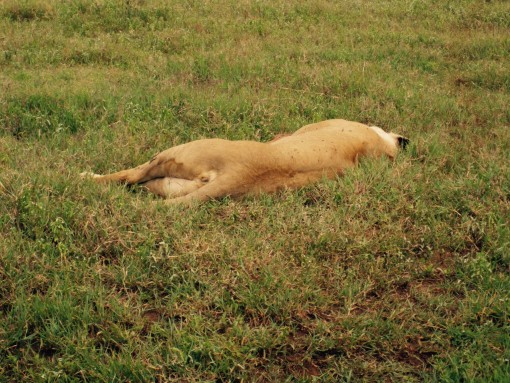 ‘Let sleeping lions lie’, I always say. At least when I’m this close to one

While lions, contrary to the evidence in that photo, do not exactly grow on trees, we were very lucky safari-goers, lion wise. We saw not only lions sleeping in trees, but lions sleeping in the grass.  And sleeping on these huge rocks called ‘kopje‘. (For you ‘Lion King’ movie fans, that’s where the Big Boss Lion lived.) We even saw lions not sleeping. One rather large male even crossed the road right in front of us. Each of us remained very still, and tried not to look like a warthog, which is one of his favorite foods. 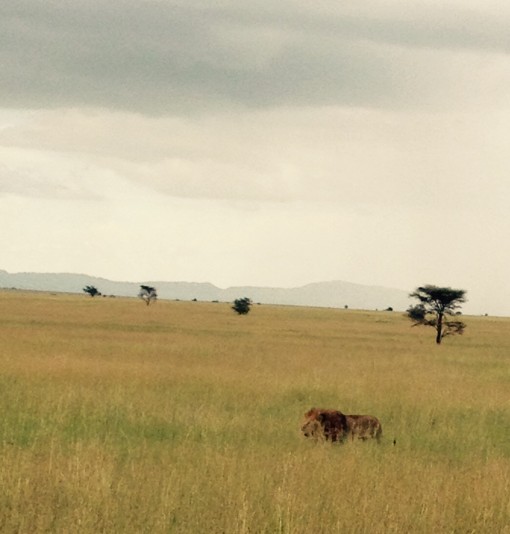 The Master of All He Surveys. At least on the Serengeti

Anyway. We were starting to feel, after more than 50 lions (seriously!) that if “you’ve seen one lion, you’ve seen ’em all.” (Not really. You never get over the thrill. I just had to say that.) 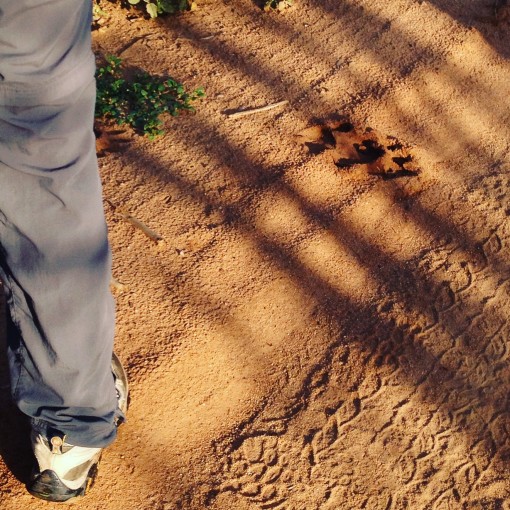 Even when we didn’t see the lion, we could see where he (or she) had been. Watch your step!

But back to looking for the leopard. It’s not that we were crossing big animals off a checklist or anything. Though there is a list called The Big Five. If I remember correctly, it consists of Lion, Elephant, Buffalo, Rhino, and Leopard, and is a leftover from the days when people hunted to kill. (Which, if you remember the Famous Lion-Killing Dentist, some still do.) There is one woman on our tour who is quite into The Big Five. Though you’ll be glad to hear that she is not a dentist.

Anyway. We’d heard there was a leopard lurking in our vicinity. So of course off we went, in a quest to find it. You know that great surfing movie ‘The Endless Summer‘? The one where the cute California surfer boys chase the perfect wave all around the globe?

Well, in the movie, every time they get to a famous surfing spot, the locals tell them ‘you should have been here yesterday’. That was kind of how we felt when we were searching for the leopard in the Serengeti.

A whole string of Swahili would crackle out of our safari vehicle’s radio, and off we’d go, only to pull up to the tree in question, and hear ‘you should have been here an hour ago’. Not exactly ‘yesterday’, but the phrase had the same effect.

Now, we weren’t exaclty disappointed with our Cat Count. (Or our Any Other Animal Count, as you will soon see from the photographic evidence I hope I can produce. I am sitting now near the bar of a lodge at the far end of the Tarangire Park in Tanzania. The only place where there’s internet for about a zillion miles.)

And, as some of you know, we’re really here to search for African Birds. The other animals are gravy. Or, if that’s too graphic an image, let’s say they are the ‘cherry on top’. In fact, some of you keep asking ‘how many birds have you seen?’ To which my answer, not being the Bird Counter in our group, is ‘somewhere between ten and a zillion’. I did ask The Dude at lunch today for an approximate count. He said ‘more than 300’, which I thought was pretty spectacular. Then he added ‘not 300 birds; 300 species’. Ooops. And wow. 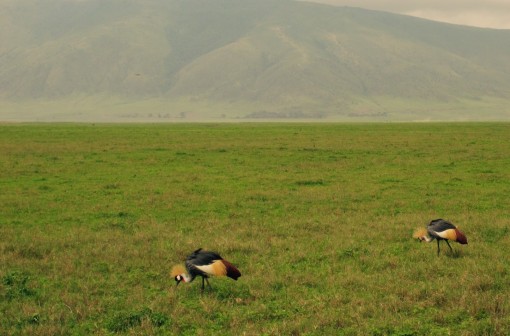 Ok. Here’s a couple of the birds we saw. Note that they do kind of have manes (!) They are some sort of crane. I would ask the name, but The Dude is napping. Rather like a Big Cat, actually

I will now reveal that we did, in fact, see a leopard. It was at the end of a long afternoon of very successful bird-and-mammal stalking. And, as usually happens, we discovered it almost by not actually looking for it. You’ll have to trust me when I tell you it was amazing. Because it was too far for my little Canon to capture. But I could see his spots and his face and his lovely long tail through my handy binoculars. I could even watch him leap from his perch to chase some ill-advised elephants who had lingered near the base of his tree. And that was more than enough for me.

But, as a bonus for you readers who’ve stayed with me thus far, here is a picture of an even more elusive cat, which we almost literally stumbled over, if one can be said to ‘stumble’ in a safari vehicle. 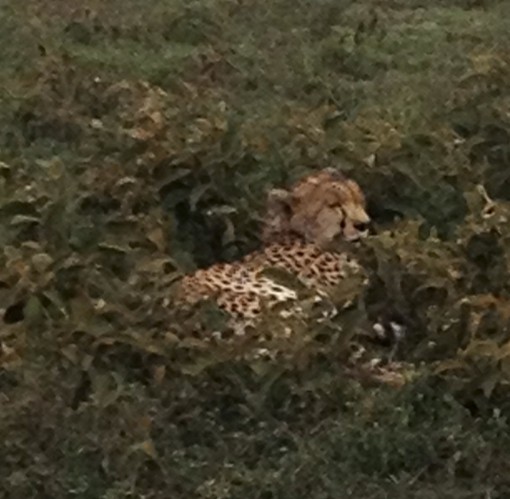 Well, if we couldn’t get a photo of the leopard, we did at least get one of the cheetah. Is that cheating?

Well, it’s over and out. Because that’s just what’s going to happen to the internet very soon.

31 thoughts on “Spotting the leopard”