‘But we did catch the Birding Bug’

If you’ve missed me (and/or my stories), may you find your reward in Heaven. Or maybe South America. Which is where The Dude and I spent the last couple of weeks — in Guyana, which is a country we had to look up on Google Earth.

We’d both remembered that movie Papillon, with Dustin Hoffman and Steve McQueen, where Steve’s character escapes from Devil’s Island in French Guiana. But we couldn’t decide whether Guiana was in South America and Guyana was in Africa. Or the other way around. (The Guiana/Guyana thing didn’t help.) And of course there’s Uganda (where we’ve been) and Ghana (where we’ve not), complicating matters even more. Turns out Guiana and Guyana are both in South America. But only one of them is famous for its Kool-Aid. 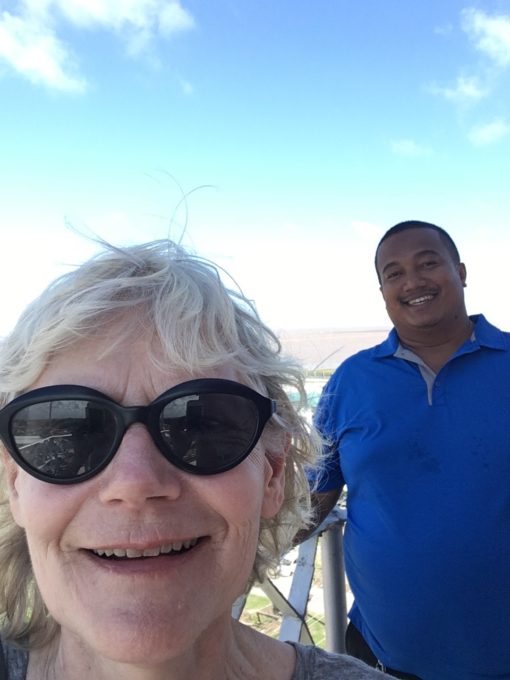 Yup. Guyana is where the Rev. Jim Jones took his followers and, ultimately, treated them to a Kool-Aid Party. Grape, it was. (Take a sec to check out Jim Jones’ Wikipedia entry. It actually lists his “Occupation” as “Cult Leader”.) 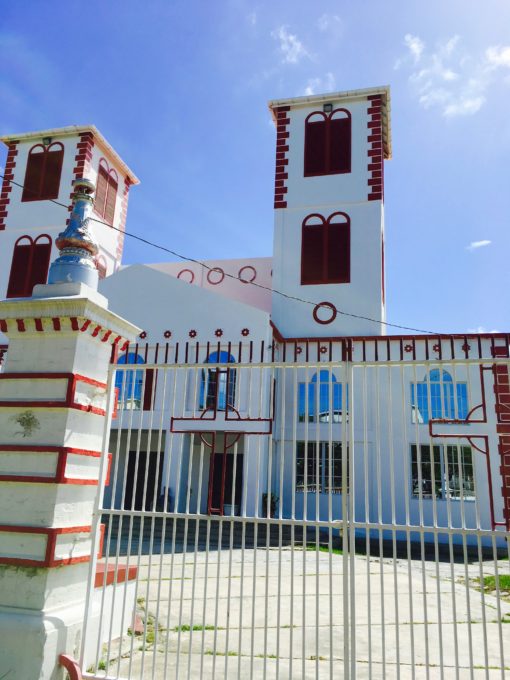 The house where Jim Jones lived. He didn’t do his Kool-Aid mixing here, though. That fun little party took place miles away, in the jungle at Jonestown

Anyway. Enough about Crazy Cults. The reason you didn’t hear from me wasn’t because I sipped any Kool-Aid, but because, once we hit the Birding Road, there wasn’t any internet. (There wasn’t any hot water, either. Which, trust me, took a whole lot more getting used to.) We did, however, have plenty of hot and cold running birds. 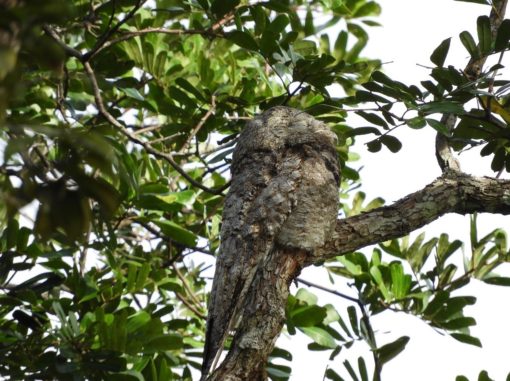 Can you find the bird in this picture? Great shot of a Great Potoo (which doesn’t do a lot of running, hot or cold), by one of our new birding buddies, Rhys Harrison

We saw shield endemics. And leks of mating Capuchinbirds. And many feathery others too numerous to mention. (No, I did not take photos of said birds, preferring instead to “just enjoy them”. Others took plenty, though, including The Dude. Though, if he remains true to Dude Form, his will never ever leave his camera.) 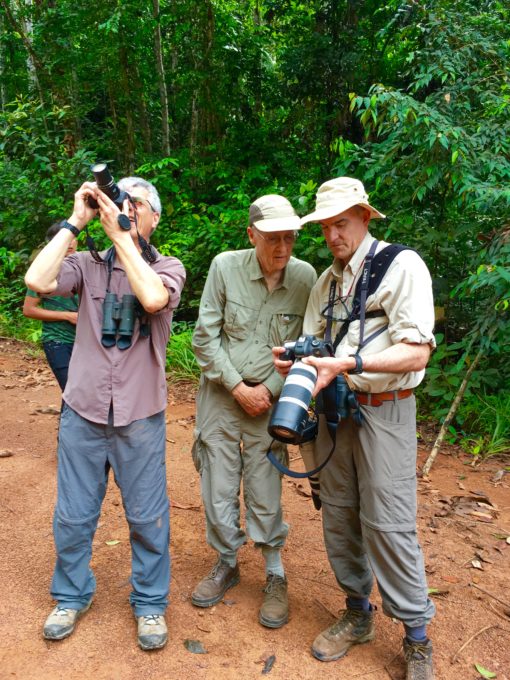 The birds, of course, were amazing. But you know that “Birding Bug” I mention “catching” in the subhead? Well. It was a Actual Bug. 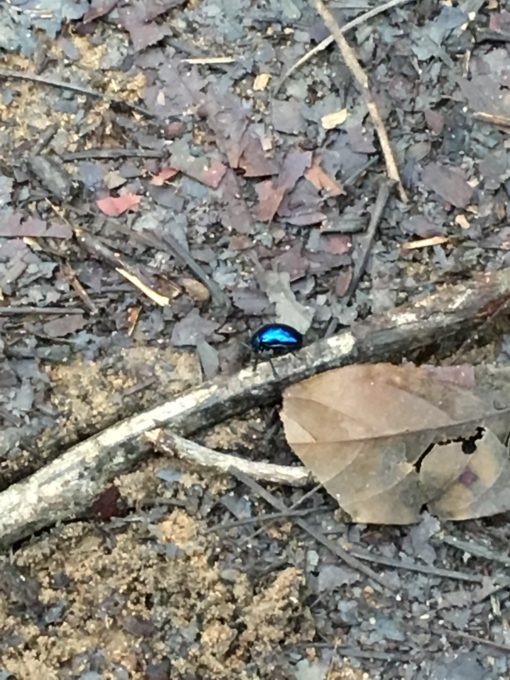 A bug that’s rather pretty. But no, this is not The Bug Of Which I Speak

The Bug in Question was a hitchhiker we encountered early on in the trip. We had been warned to zip our bags when not in use, especially if our bags were located on the floor of our cabins. Well, guess who didn’t read the memo — or pay attention when I read it to him?

You got it. The Dude was fussing with his camera gear one evening when a beetle the size and shape of a VW strolled casually into his backpack. Naturally Dude Man enlisted my help trying to get him out. We unpacked all the backpack’s gear, then tried shining a light in there, shaking it upside down, and even (very gingerly) examining the seams. We didn’t see Mr. Bug leave, but since we couldn’t find him anywhere, we figured he must have slipped out somehow and gone out to find some new bug friends. Then, seeing as how we had to get up at 4:30, we loaded the backpack back up with gear and tried to forget about it. (Urk.) 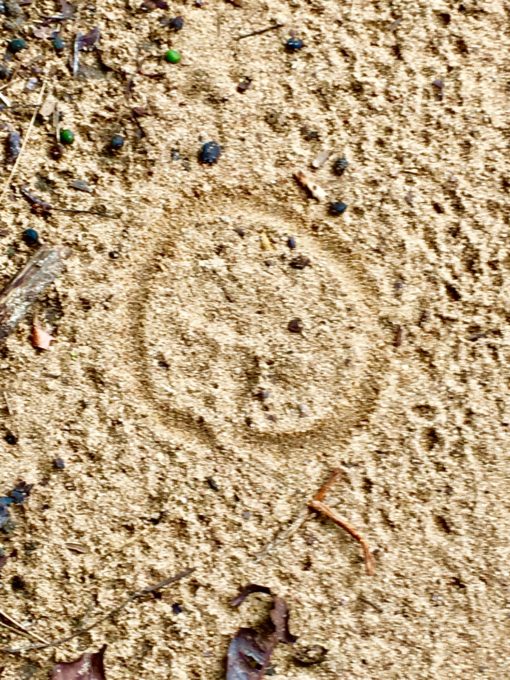 Nope. That’s not The Bug either. Within the circle is a jaguar footprint we spotted on the trail. Which is all we ever saw of the jaguar

(Needless to say, we used our flashlights even more judiciously than usual when tiptoeing to the bathroom that night.)

Next day, after hours of bouncing along a red-dirt road to our next destination, we were just settling in to our new digs when The Dude unzipped his backpack. Eh, voila! Out strolls Mr. Bug. And disappears under the bed. The same bed upon which I had earlier found a “mint” on my pillow which turned out to be gecko poop. “Happy new home, Mr. Bug; we hope you like Surama!” 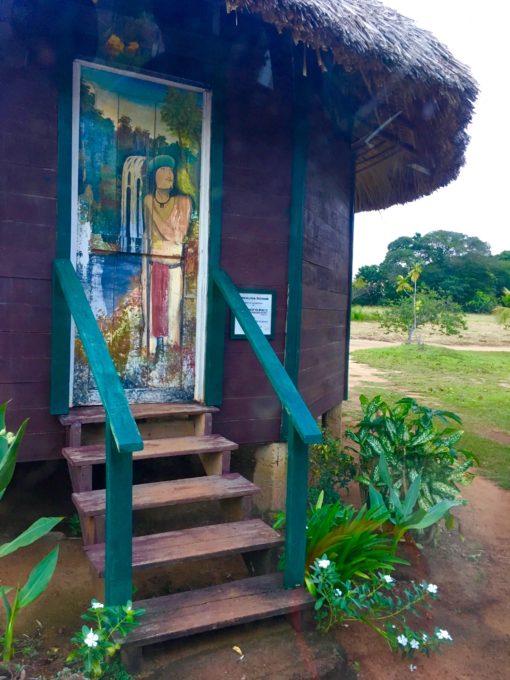 Mr. Bug’s new home, the Surama Lodge. Somewhere outside the Lodge. We hope

Next night, after a long sweaty day of bird-studded traipsing, we were steeling ourselves for another cold shower when out pops Mr. Bug — making a beeline from under the bed to my bag. When I reached for the zipper to deny him entry, he actually jumped on my hand. I yelped in surprise (this was, as I mentioned, a Very Big Bug) and shrieked for The Dude’s manly assistance. “Get him off me!”

So there we were in partially-clad disarray, jumping around trying to dislodge and discard this darned bug. When The Dude finally managed to capture it with his bath towel, I urged “Throw it outside!” To which The Dude responded “But I’m totally naked!” “Just do it!” I hissed back. “They’ve all seen naked people before!” 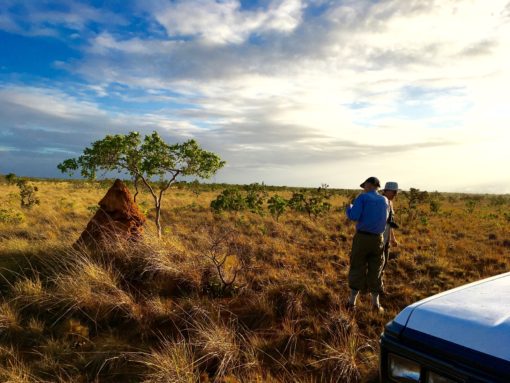 Speaking of bugs, that’s one big termite mound there on the left. None of them hitchhiked, though

So much for Mr. Bug. Speaking of “creepy crawly critters”, as our guide called them, we did rack up quite a few: millipedes, crickets, termites, lizards, the afore-mentioned geckos, and even a couple of (gasp) snakes. But, as far as we know, Mr. Bug was the only one with whom we formed a lasting bond. 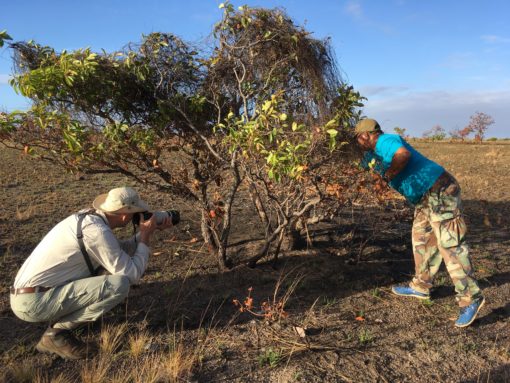 The Dude and Ron, our local guide extraordinaire, check out a rattlesnake right there in that bush. Nope, I didn’t get any closer than this. If you want to see that snake, you’ll have to wait till Dude Man shares his photo. Don’t hold your breath

Of course I have more Guyanian Adventures to relate. But time is short and this post is long. Let me leave you with a photo of our Nightly Ritual (other than the cold showers, that is), the Sundowner Toast: a shot of El Dorado Rum, made right in Guyana and served up in little Guyanian flag-embossed shot glasses. Which did get to go home with us in that backpack. 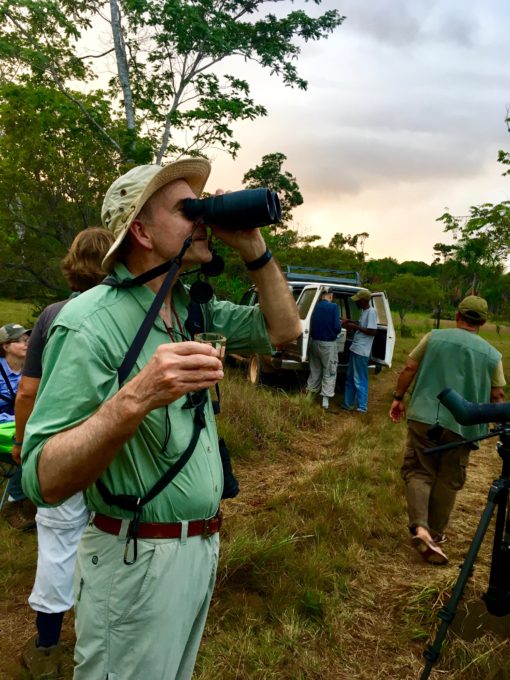 Balanced Birding. A shot of rum in one hand, binocs in the other

21 thoughts on “Nope. We didn’t drink the Kool-Aid”