‘Why being an Aunt is so Great’

I was going to write yet another post about our Ugandan Trip, to be titled (wait for it) ‘Gorilla My Dreams‘. But then some other little monkeys intervened. 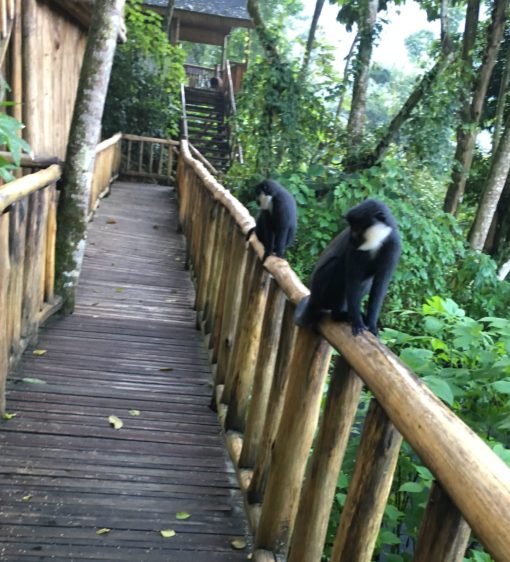 The little Ugandan monkeys who wanted to visit me in the worst way. And ‘worst way’ it would have been, had I acquiesced

The monkeys in question would be my (gulp) great-nieces. They are the absolutely adorbs spawn of my Nephew-By-Marriage and his Thank-God-He-Married-Her equally adorbs wife. I, of course, leave out Actual Names in this blog. But these are The Ones Who Own the Chocolate Factory. (When you’re done reading this story, check out their chocolate. Literally.) 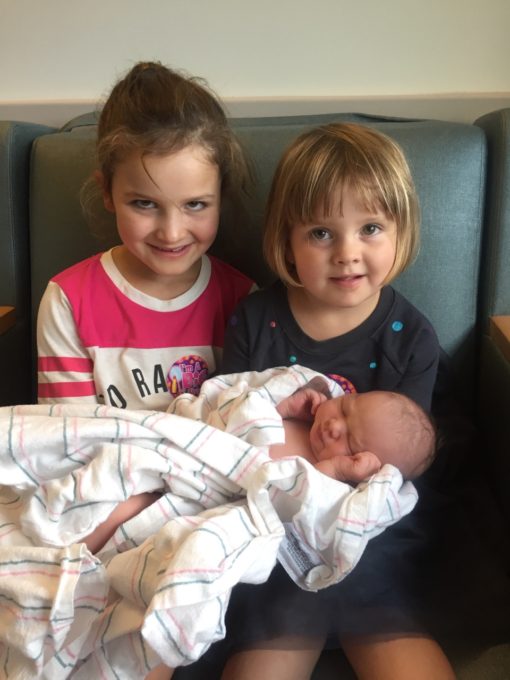 The Monkeys in Question. Right after Numero Tres was added to the mix

Those of you who read my stories regularly (your reward awaits in Heaven) know that I have a large and much-beloved family. My Henry side gave me four-count-em-four aunts (and that’s only counting my Dad’s sisters; there were four other aunts-in-law). 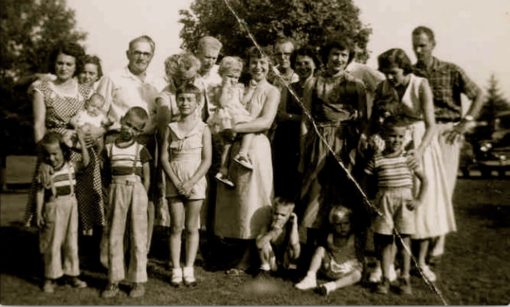 The Henry Clan, including all four Original Aunts. That’s me at my mother’s feet, next to the kid with his thumb in his mouth. That’s my soon-to-be-spoken-of Aunt Vera at top left

I have ever-so-fond memories of listening in on adult conversations around the Henry or Peterson kitchen table, where we little cousins would be seated on various aunts’ laps. My Favorite Sister and I were reminiscing about this at a recent gathering. She reminded me that if we sat really still and stayed really quiet on one of said laps, the aunts would forget we were there, and really let their hair down with their stories. These gab-fests were fueled with plenty of coffee, and she said she still associates whispering and coffee breath with intimacy, safety, and a dash of subterfuge. 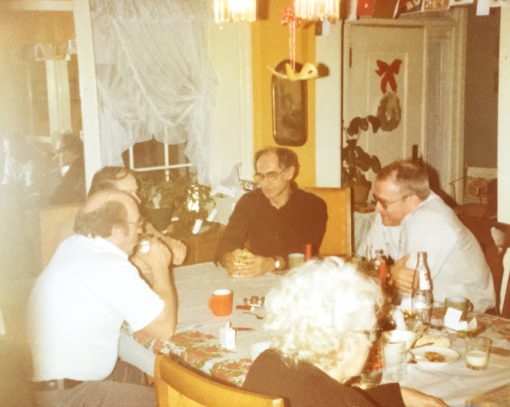 Peterson Uncles around the dining table (one Henry — my Dad — in the middle). Notice there are no small children on their laps, at least none that I can see. They are all in the kitchen with the aunts

I’m happy to say that my sister and I kept up this tradition when we in turn became aunts. Though in our case, most of the fascinating conversations were fueled with wine, not coffee. (See photo at the top of this post for an excellent example of an alternate use for an empty wine bottle, featuring my one-and-only Peterson great niece.) 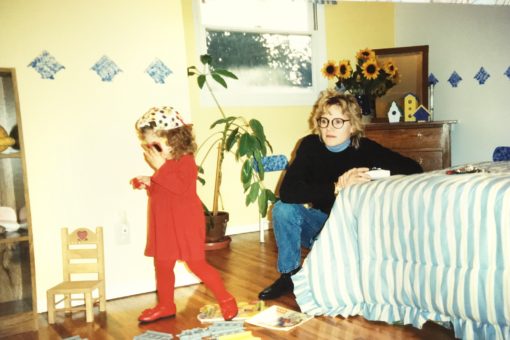 That’s me, honing my Aunt Skills with one of my sister’s adorable daughters. There is probably a glass of wine tucked under the bed

My Peterson side aunt cache wasn’t quite so large, my mom having had only one sister. Luckily, her brothers had excellent taste, and I adored my aunts-in-law too. I have wonderful memories (again involving a lap) of my Aunt Shirley brushing my hair. She also taught me to knit, which turned out to be a highly useful Aunt Skill. 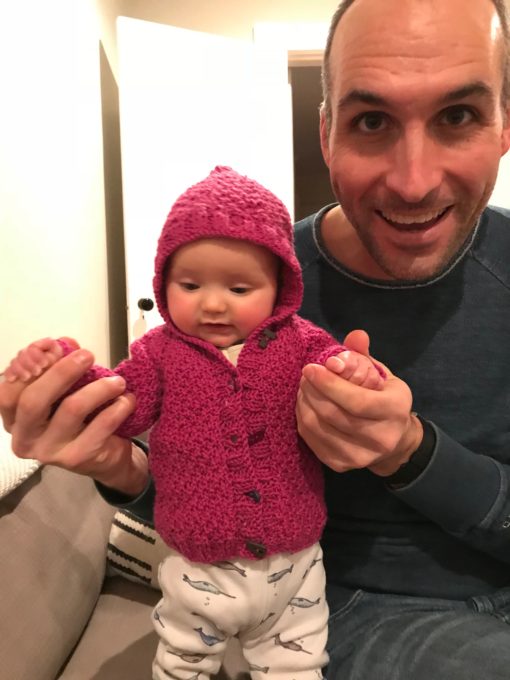 Thank you, dear Aunt Shirley, for teaching me to knit. Every little niece or nephew or great-niece has been ‘gifted’ a sweater, whether he/she liked it or not

My Aunt Shirley has, alas, passed on to the Great Family Reunion in the Sky. As have all my other aunts, including the last of the Henry Batch, my lovely Aunt Vera. My Aunt Vera was a nurse, a mom of a large clan of fun cousins, and a truly lovely person. She did cut her kids’ meat for them, but as far as I know that was her only fault. (And it’s debatable whether that even counts, fault-wise.) 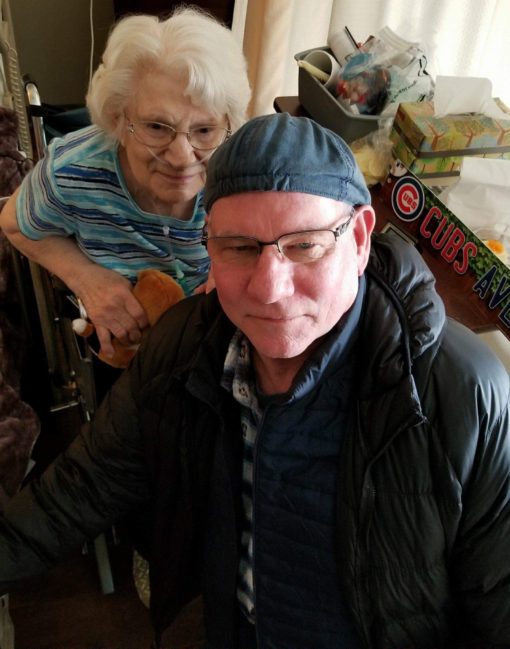 My late, lamented Aunt Vera just a couple of months ago with my Middle Younger Brother Roger. She was not only the last Henry Aunt, she was the last Henry Sibling. End of an era

Which brings me to my last remaining aunt, my mom’s sister Marilyn. Aunt Marilyn (whom I called “Mooey”, probably because I was trying to say her name and couldn’t) was the Favorite not only because she was my mom’s only sister, but also because she was incredibly energetic and fun. She taught us to ice-skate and ski and took us to parades and let us ride on this cool sled she owned called a rodel. She also made up crazy jokes and games and was a big tease. We cousins would fight over who got to sit next to her at dinner. 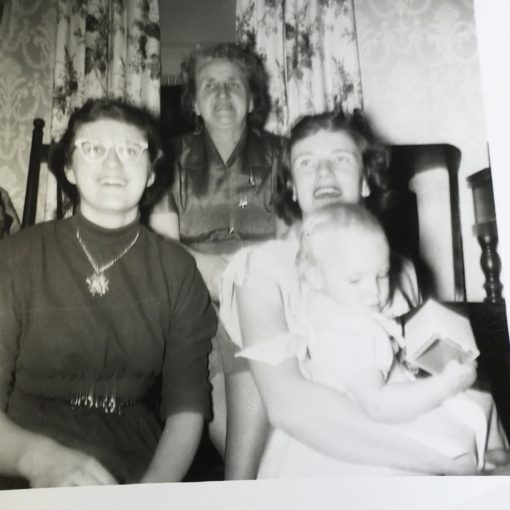 Favorite Aunt Marilyn, not long after I appeared on the scene

Aunt Marilyn lived at home before she got married, and when we’d visit I got to sleep in her room. (Which was a Big Deal, and a privilege only I was granted since I was a girl.) One morning she said she really really needed to ‘go to the bathroom’, but she was ‘too lazy to get up’, so would I ‘get her the bedpan‘. Honestly, she had me looking everywhere for that thing. And she was in dire need of it before she stopped laughing long enough to tell me she was kidding. 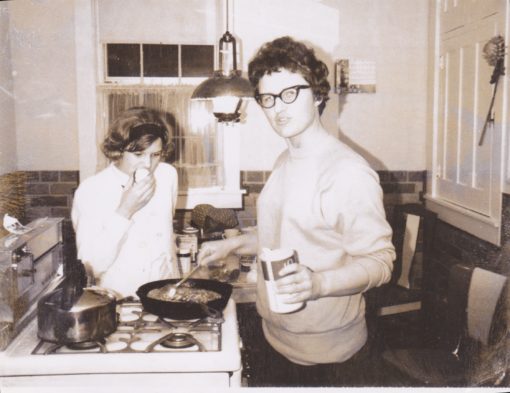 Aunt Marilyn and me doing something companionable in the kitchen. A frying pan, not a bed pan, is involved. As well as a large box of salt

Anyway. Back to the Weekend Just Past and those three little monkeys. Yes, they are my great-nieces. And I’m happy to report that all the Aunt Shenanigans hold up for this generation too. I don’t have any grandchildren (yet), but I can imagine that some of the perks are the same. You get to do all the fun stuff — like play games and read books and make silly faces — then hand the kid back when it’s time for bottles or binkies or (urk) diaper changes. And we don’t have to wear awful house dresses. Well, unless we want to. We’re so old — and the kids are so cute — that nobody notices. 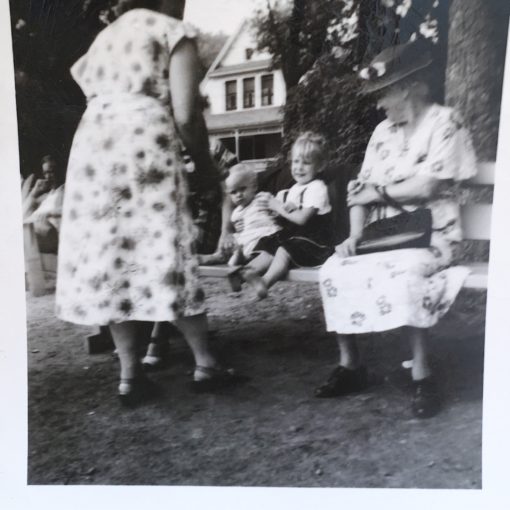 Great aunts, in my mind’s eye as well as my memory. That’s me in the middle on some cousin’s lap being admired at some Reunion or Other

Which brings me to the Beach Boys. On the first day of my inaugural great-aunt hostessing gig, I naively offered to watch Grand-Niece Number One while her mom went for a run. (Her dad was otherwise occupied on a bike ride with The Dude.) After all, I had ‘watched kids plenty of times’ and ‘knew what to do’, so ‘go on and have a good run; I’ll be just fine.’

Well. The second that little girl saw her mom trot off into the sunrise her face registered first Alarm, then Disbelief, then Fear and Rage. Which turned into Outright Screaming. So what did I do? I picked up my iPhone — no, not to call her mom in despair — but to play us some Beach Boys (‘Barbara Ann’, to be specific). I picked up that wailing toddler and we danced. I may have gotten a little winded by the time her mom got home, but I’m happy to say that it worked. 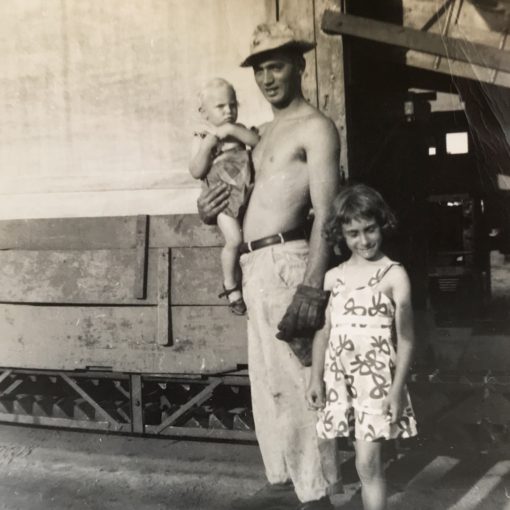 My Uncle Mike carrying me around before The Beach Boys existed. I do look reasonably entertained. That’s my Aunt Susie helping him

Well. It looks like I’ve run on and on. Like a great aunt is wont to do. So I’ll wrap this up with a reminder. 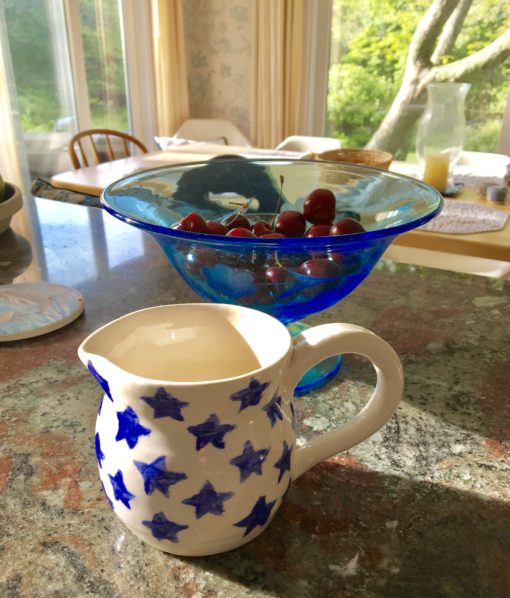 ‘Little pitchers have big ears.’ (Though this particular pitcher only has one.) At any rate, if you find yourself with a niece on your lap, you may wish to watch your wine intake. Or stick to coffee

8 thoughts on “No bottles, no binkies. Just Beach Boys”