‘Korea. Worlds away from Kirkland, Illinois’

I don’t actually remember any of this, of course. But I grew up hearing about ‘when Daddy was in Korea and we lived at Gramma’s house’.

See, my Dad was a Second Lieutenant in the Air Force. I’m going to check with Mom, but I’m pretty sure he went to college via the ROTC. For you Whippersnappers, that’s the Reserve Officers’ Training Corps. Which means, essentially, that you trade getting some $$ to go to school for serving your country when you get out. Of school, I mean. Here Dad is at his graduation. Everyone in this picture, except me, is a Proud Parent. (Though I did eventually become one, as you know all too well.) 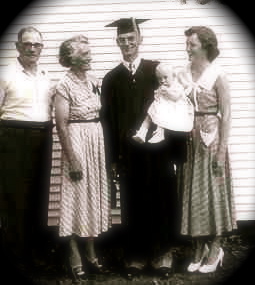 My Dad at his U of I graduation. He is holding me instead of his diploma.

So, I had hardly even met my Dad when off he goes. To Korea. He was originally supposed to go to the Philippines with Mom, and me too. (We both got malaria shots in preparation for this; supposedly, one shot makes you impervious to malaria for a lifetime. I’m not eager to test this theory.)

But it turned out that some important papers needed to go to Korea, and an officer needed to take them. My Dad was an officer; he was ‘volunteered’, and off he went. When I was little I had this vision of these papers in a briefcase handcuffed to his wrist. I was pretty sure that was only a romantic notion of mine till I checked with Mom just now and found out that this was absolutely true.

Well, no Philippines for us. No Korea, either. There was a ‘conflict’ going on there, so icks-nay on the oing-gay. Instead, since my mom was really young, I was even younger, and there was another baby on the way, it made sense for Mom and me (and the future Scott) to move back home with Mom’s parents and siblings for the duration.

My Uncle Ronald (who called me Little Toot) got married and left, and my Uncle Mark got sent to Japan (Navy?). But my Uncle Karl and Aunt Marilyn were in high school, so definitely still around. Plus, of course, Gramma and Grandpa Peterson. They made a fair-sized audience for my antics, and apparently I took advantage of the situation and became very spoiled indeed. I think they even called me ‘Imperious Alice’. Oh well, it was good preparation for survival in the New York Ad World, if nothing else.

A couple of years went by. There wasn’t much phoning (too expensive, too difficult). Though I do think my Dad got a phone call when my brother was born. I certainly hope so, anyway. But there was a lot of picture-sending and letter-writing. I know this because we kids were allowed to dig through a big box of family photos on rainy days. There is one photo I remember in particular (but, alas, cannot find) of me holding a toy telephone. There is Mom’s writing on the back: ‘Hello, Daddy!’

Eventually, Dad did get to come home.

I was told that when he walked through the door I hid behind my mother’s skirts. ‘Go kiss your daddy!’ my mother urged. So I ran into my bedroom and came back with his picture — the picture I had been kissing good-night for two years — and kissed it, fervently, while glaring at this total stranger trying pitifully to coax me into a hug.

Thanks, Dad. For being a veteran. And being my Dad.

Even if you aren’t related, you might enjoy more stories featuring my Dad. Check out ‘Dad Eggs and Ham’, in which he stars, and ‘Happy Ho-Made Halloween’ , ‘That’s my Bob’, and ‘To Hell with Kale’, in which he makes memorable cameo appearances. And then there is ‘My Mom, the Party Girl’, featuring my Mom, who is equally cool, and, even more important, Still Here.

Thank you for reading. And if you still have your parents, and they are within arm’s reach, hug them. Right now.