Ah, the miracles of modern travel. Sunday I was within wave-crashing distance to the Atlantic. And Monday I was smack-dab next to the Pacific. Funny, we say things like “It’s SUCH a long flight from New York to Portland — six whole hours!” Which seems like a long time till you consider that it once took months to get there in those wagon trains. Day after endless day heading due west. And those poor pioneers didn’t even have sunglasses.

I have to keep reminding myself that air travel is a wonderful miracle because I am such a nervous wreck when it comes to flying. Those of you who are my Facebook Friends already know this, and responded with great kindness (and many funny comments) when I posted this the other day:

Out of respect for their privacy, I will not show you these comments (their names are attached, and I haven’t yet figured out that cool trick my FB Friend Marcy knows where you can block them out with a swipe of your finger) but they ranged from encouraging (“You can do this!”) to reasonable (“More people die in cars than airplanes”) to practical (“Pretend you are petting a kitty on your lap”) to empathetic (“I feel the same way. I only drive these days. I figure god gave me hands to hold a steering wheel, not wings.”)

It’s not that I get airsick. It’s more like I go into high alert. And not just right before the flight, either. I’ve barely hit the ‘purchase ticket now’ button in my Delta app when the nervous agitation begins. I start thinking about what to pack, what documents I’ll need, when and if to order a car, etc., etc., etc. My family knows this — and knows I’ll be extraordinarily twitchy and prone to worries and concerns.

I’ll ask how much time I should allow to get to the airport (though I’ve been to each of my New York area airports zillions of times in the almost-forty years I’ve lived here). And, trust me, I always allow way too much time. This trip I left at 5:30 AM for my 8:35 flight, because the Delta website said to allow at least two hours before flight time because it’s peak vacation time. Guess when I got there? 6:00. And I was at my gate, clutching my Peet’s latte and a fresh New York Times, by 6:45. Oh well. It wasn’t as bad as the time right after 9/11 when I insisted that my whole family (Dude and Child plus moi) leave at 5:00 AM for our 10:00 AM flight to Bonaire. I thought they were going to tie a plastic bag over my head.

Oh, and a few days before Travel Day I (subconsciously, sort of) start thinking of excuses not to go on whatever flight is coming up. I’ll be like, “Dude, can you look at my toe? I think it’s infected.” And he’ll be like “An infected toe can be very serious. Here’s some antibiotics. And yes, you’ll be able to fly just fine.”

Speaking of antibiotics, since he’s a doctor, he’s also able to prescribe certain other pharmaceutical miracles, like valium. I can’t tell you how much it’s helped me to take, as pescribed, one half a valium half an hour before boarding, and the other half once I settle into my seat. Maybe it’s psychological, because sometimes just clutching the bottle helps. My FB Friend Karen is right, BTW. Air travel is why Roche invented valium.

Oh, and yes, I’ll admit it. I have my superstitions. I have this necklace that my Favorite Only Sister gave me that I always wear, and that’s never failed me. Not yet, anyway. It’s a Betsy Johnson skull that I spied on my sister’s dresser and admired. Bless her, she up and gave it to me. And she’s not even an Eskimo. 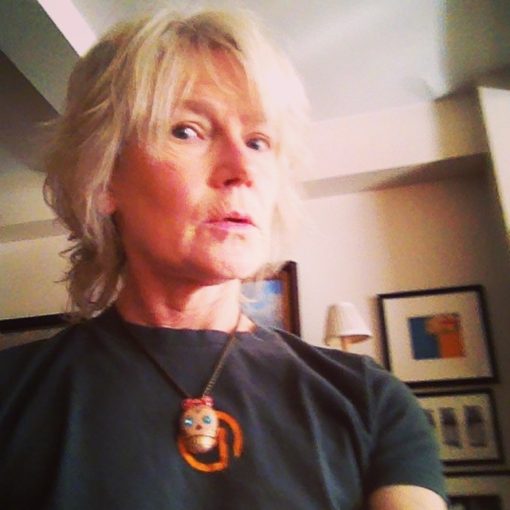 My Lucky Necklace, getting ready to protect me on a flight to (gulp) Africa

The reason I ‘need’ that valium and that Lucky Skull is because I’m not just afraid of flying, I don’t believe in flying. Not being a scientist, I just cannot fathom how a gigantic (and very heavy) metal tube can lift up into the air and fly. It’s simply beyond my comprehension. It doesn’t matter how many times I’ve tried to understand its principles, I just don’t believe in it. It doesn’t help when I’m seated next to Scientist-and-Super-Rational Dude (who is also an amateur pilot and knows quite well how to fly a plane) when he says things like “hmmm. They really should be putting the flaps down now, or we won’t generate enough thrust to decelerate in time.” Or something. Whatever it is, it’s always spoken in a super-calm, super-scary voice.

I’m usually fairly okay when we’ve leveled off and reached ‘cruising altitude’. Before that, not only does taking off scare me (“Will this damned big ole heavy thing ever get in the air?”), so do the darned pre-flight instructions. I mean, how can the flight attendant keep a straight face while delivering lines like “in the unlikely event of a water landing…”? A water landing? Only if you’re Sully Sullenberger, my Absolute Hero and inspiration for my story ‘Channeling Sully Sullenberger. ‘

Then, once I’ve checked that no one has been sucked out a window, I can settle into my inflight Cone of Silence and distract myself with books and/or movies. (During takeoff I clutch a New Yorker with sweaty palms and refuse to look out the window.) 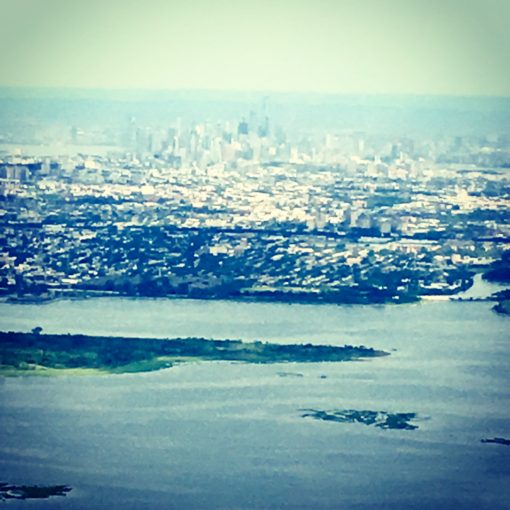 Bye-Bye (for now only I hope) New York City

This time I’d downloaded a book called ‘A Speck in the Sea’, which is about a lobster fisherman who fell off his boat in the middle of the night and bobbed around in the water for, like, 16 hours before being rescued. Nothing like a good ole scary ocean story to distract one from flying fear. (Last trip I watched that Blake Lively movie with the shark.)

But I didn’t even have a chance to wallow in that poor lobsterman’s fate. I fiddled around with the seatback screen and discovered they had ESPN — which was showing Wimbledon (!) 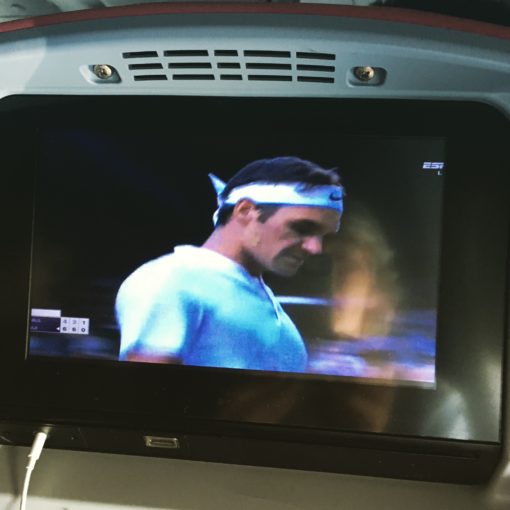 Best seatmate ever, Roger Federer, AKA God of Tennis

And if there’s anything I like more than watching tennis tournaments (Wimbledon being my favorite), then I don’t know what it is. Unless it’s seeing my family, at last, all gathered here for a get-together we call a Henry HooHah, here on the gorgeous Oregon Coast. Which reminds me, I’d better get downstairs and join them. But before I do, here’s one last picture of what I saw when I glanced up from Roger’s magical moves for just one sec.

Mt. Hood and his buddy Mt. Rainier, peeking (or is it ‘peaking’?) out of the clouds just for me

13 thoughts on “I just flew in from The Coast”