A couple of weeks ago I revealed to all and sundry that I have never, in all my grownup life, bought a couch. (See the aptly-named “I have never bought a couch” for deets.) Not buying a couch, I mused, meant that I’m probably not really a grownup.

Well, today I’m going to admit that I have never bought a car, either. Well, I have bought a car — an old Austin America, which I’ll tell you about in a sec — but I’ve never bought a new car. Where you go in a showroom and talk to a car dealer. You know, like that guy Jerry Lundegaard in “Fargo”. 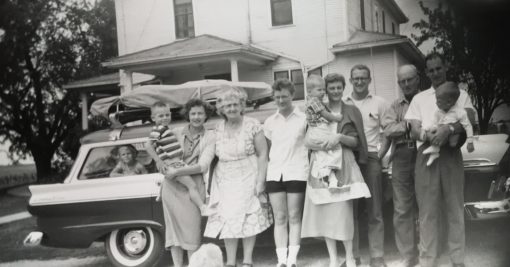 I remember going to the showroom with my whole family to buy this Ford station wagon. It was brown and cream and smelled amazing

I got to thinking about this whole new-car thing because we just got back from our annual Best-Friends-in-the-Catskills Visit. (See “Take me home, Country Road” for a nice tale about them.) Said Best Friends always have a new car — they lease a brand-new Mercedes every year. (Something to do with business or some such.)

Whatever the reason, they always have a new car — and each new car is more intimidating (at least to me) than the last. The current model has a dashboard that looks like a fighter pilot’s, with flashing lights and LED displays and GPS maps. It talks to you, this car. (“Fasten seat belt, please”) And it “helps” you. It not only has a rear-view thingie that “assists” in backing up, it can also parallel park itself. I am not making this up. Oh — and it has no car key; just this sort of fob thing that kept getting lost all weekend.

The part that really got to me, though, is how this car “corrects” you if you veer across the yellow line or onto the shoulder. Honest. If you stray, it steers itself back into the lane. It also brakes itself if an obstacle presents itself suddenly. (Think deer here). It will even drive itself — staying in the lane and keeping at a constant speed. But it “warns” you (with a jerk) if you take your hands off the wheel for 30 seconds. I guess even the Mercedes Makers think some civilities must be maintained.

Sheesh. I’m sorry, but I really don’t want to drive a car that thinks it’s smarter than me. (Shades of “Christine”.) 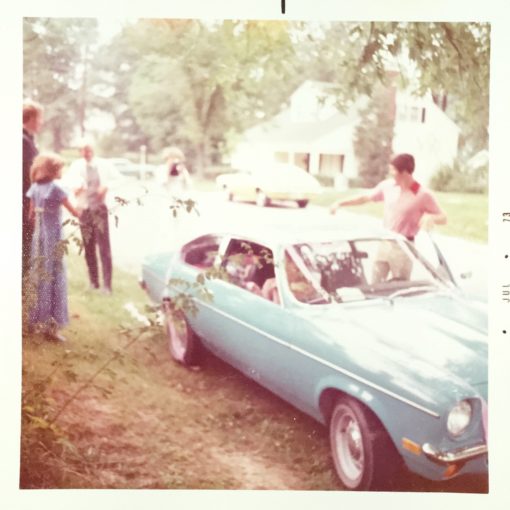 Nope, not the Austin America. This was a Chevy Vega that I also did not buy. The Guy Before The Dude and I are getting ready to drive off in it on our honeymoon. Sigh

One car I did buy on my own was a definitely not-new brown Austin America, which was the shape and size of (and kind of looked like) a bus shelter. Sadly, I do not have photographic evidence of ownership of this car. I bought it for 800 bucks — cash — from a woman who was saving up to run away from her abusive husband. She tucked the cash into a Ritz Cracker box in the pantry and handed me the keys. 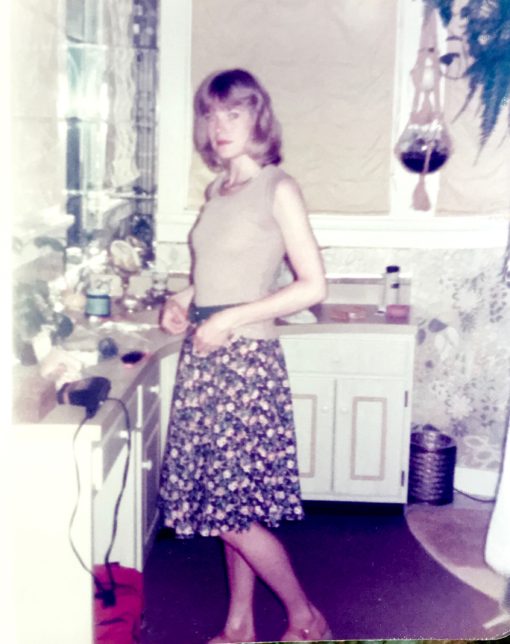 Me, around the time I bought the Austin America

This car was Trouble from the word “go” (or in this case, “no go”). For one thing, the engine was mounted sideways. Which meant that, when it rained, the alternator would get wet (are you surprised I know what an “alternator” is?) and the thing would, well, just…stop. This happened once at three in the morning on Interstate 70 halfway across Missouri. A trucker stopped to “help” me and offered to let me sleep in his bunk. Um, “no thanks”, I said and asked him to ferry me to the Truckstop up ahead instead. To this day, I shudder to think that I got in the truck with him.

Also, (less dramatic, but still) the driver’s-side window wouldn’t open. One day I needed to get gas right after having some fairly major dental work. When I drooled “fiww ih uh” to the attendant at the gas station through a crack in the door, he gave me quite a look. 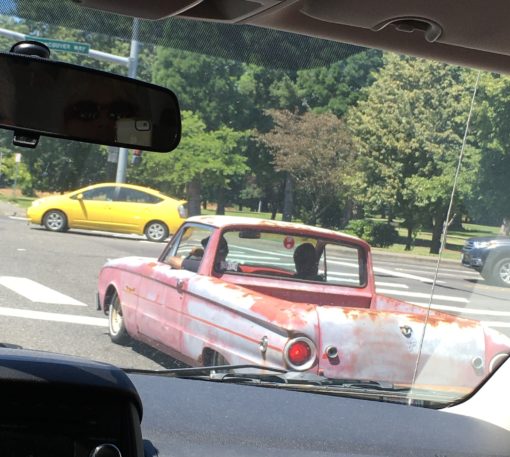 Not the Austin America either. But somewhat reminiscent of the overall effect

Back to the New Car Thing. Though I haven’t bought one on my own, The Dude and I have bought new cars together. The first was a Honda CRX, which was a sporty little two-seater. The Dude’s Dad took one look and asked, “Where are you going to put the baby?” “What baby?” is what we thought (but did not utter aloud). Of course, as luck would have it, we did in fact pop out The Child shortly after buying this polar opposite of a “family car”. But we simply strapped her baby seat into the cargo hold with windsurfing bungie straps. I’m dying that I can’t find a picture of this work-around.

So what is this Unicorn for which I have titled this story? It was (and is) the last new car The Dude and I bought together: a ’98 Toyota 4Runner, which (pause for drama) we bought in the Fall of 1997 and is the same car we drive today. The Car Guy who takes care of it for us calls it a “Unicorn” because cars like this one are rare indeed and guys like him love to work on them. (Lots of mechanical stuff; very little electronic stuff.) Guys who look like they really know their cars actually offer to buy this car on the spot when we’re stopped at a light.

The Toyota has a nice plain ole car key. But no bells, no whistles, and definitely no voice that talks to you. It doesn’t help you back up, can’t park itself and wouldn’t dream of scolding you if you took your hands off the wheel. The Dude and I plan on driving this puppy till it won’t drive anymore.

Maybe, instead of a new car, I’ll buy me a can of new car smell. (Somebody told me you can do this.) Because that’s the only thing I miss when I get behind the wheel of The Unicorn. 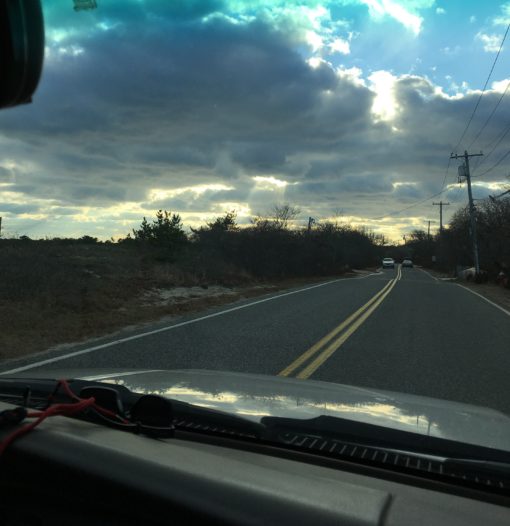 Off into the sunset with The Unicorn

8 thoughts on “Driving the Unicorn”