Ten years ago tomorrow (June 12, 2009, it was) my Dad was pretty darned happy. He’d made it to 80, and he was the guest of honor at a big ole party at the assisted living place. 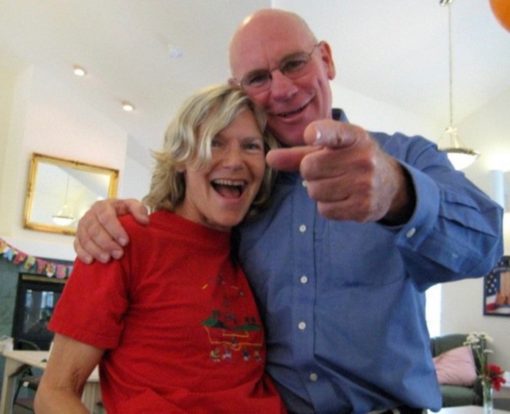 Oldest Younger Bro Scott (and me) at Dad’s Big Birthday Party. This is, famously, the Last Photo Ever Taken By My Dad. He borrowed my camera and shot it from his wheelchair

Dad loved living there, which may seem hard to believe. But he was kind of like their Prom King; he ruled at Scrabble and Rummikub and Trivial Pursuit, but mostly he regaled his co-residents and fans with jokes and stories. He knew lots of jokes and stories. 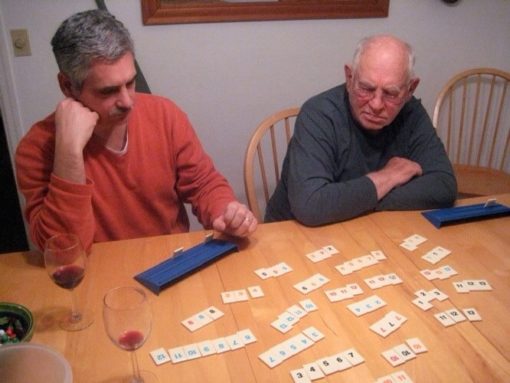 Dad was a whiz at games. And only partly because he cheated

Yes, Dad cheated at games. He would reach into the Folger’s can where we kept the Scrabble tiles and sort of “Braille-read” the letter faces for the Zs and Qs and Js. He had a very good sense of touch. Which did not diminish with age.

Anyway. Dad was living at the assisted living place because he’d been diagnosed with dementia. It took a long time for him to be diagnosed. Those of you familiar with dementia (so sorry if you are) know that it can be notoriously difficult to pin down. One of the symptoms is a bad temper (though they call it “agitation”), and, bless his heart, my Dad had rather a short fuse his whole life. (He used to explode if somebody scraped a pan or chomped a raw carrot or served him semi-thawed-out-frozen-for-economy’s-sake-bought-in-bulk-from-the-factory-store Bunny Bread, for example. And this was when he was, like, thirty.) 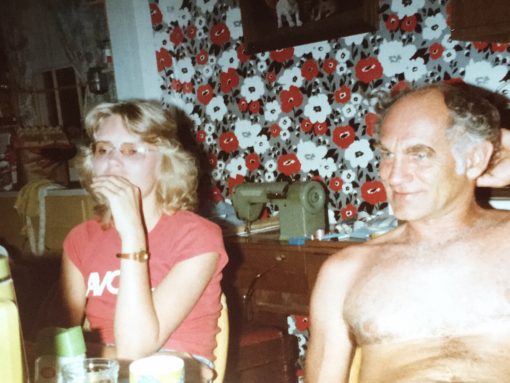 Dad liked to sit around in his underwear. This was actually pretty okay. Until he switched to tighty-whities

There’s also the Sundowner Thing, which involves getting up in the night and roaming around, often in your underwear. I’m here to tell you that Dad did that for years too. (When he stayed at my house I made a point of setting the coffee machine up before I went to bed at night to minimize drawer-and-cabinet-door slamming at 3 AM. But then I’d forget about the garage door. Sigh.)

I guess it was the “lack of social control” symptom that finally clicked those dementia puzzle pieces into place. Dad started doing things like laughing loudly and inappropriately. Saying whatever was on his mind. Dad: “That lady is so fat!” Mom: “Dale! Shhhhh!” Dad: “But that lady is fat!!!” Only he didn’t say “lady”. 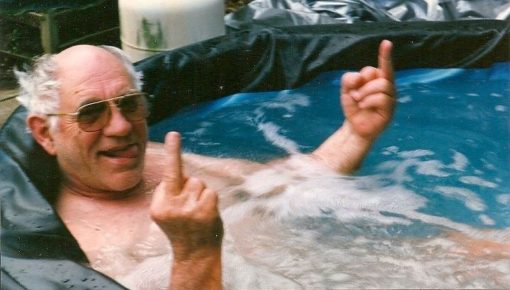 So off to Suzanne Elise Assisted Living Community Dad went. (I mention the name because it was a very nice place.) Like I mentioned, he participated in many activities. And he could also leave the premises pretty much whenever he wanted, like to ride his bike. Er, trike. 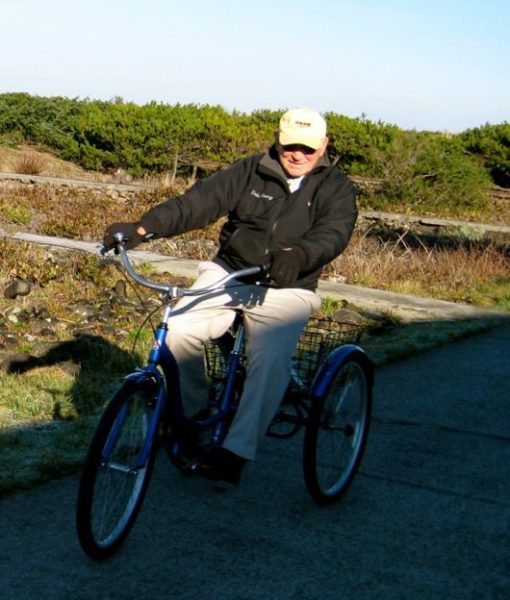 Once the cops stopped Dad; seemed a blue trike had been stolen. Dad wasn’t the culprit; turns out there were two blue trikes in Seaside

“Nice” though it was, my Mom did not want to live at the assisted living place with Dad. Well-Meaning Person to Mom: “Don’t you want to move in with your husband?” Mom: “Not on your life.” So we’d visit Dad at cocktail hour and the like. (Yes, they had cocktail hour. With real cocktails!) And we’d take him on outings.

The Dude took Dad “car-birding” once. (This is birding where you don’t get out of the car; Dad loved it.) And The Child once gave an impromptu piano concert for Dad and Dad’s Fellow Residents. (She didn’t have any music with her, so she found some online and printed it out; Dad loved this too.) 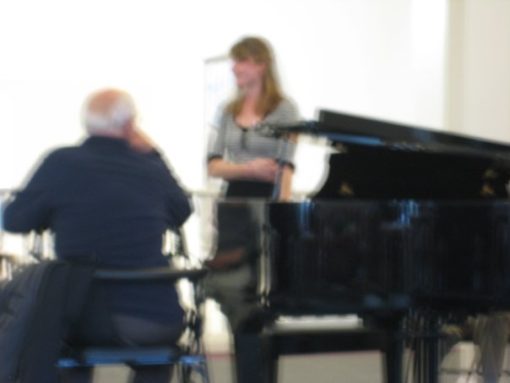 On one of our outings, we drove up to Astoria, stopping for coffee at what seemed every bend in the road. (The Northwest is perfect for stop-everywhere-for-coffee types; there’s a drive-in coffee place every few feet, or so it seems.) 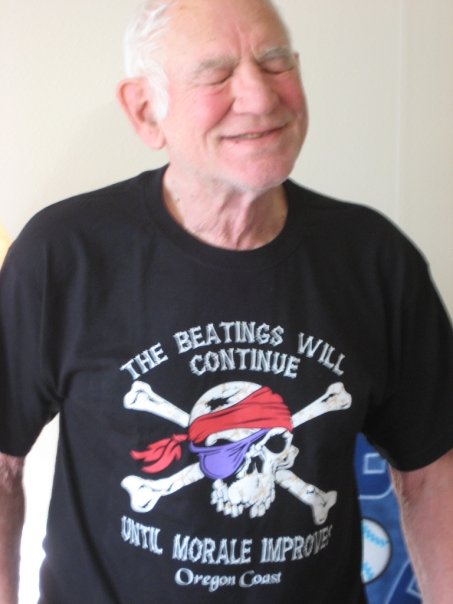 At one coffee place, Dad gets a wacky souvenir along with his java

We roamed around Astoria for a while, doing Astoria-like things like poking in thrift shops (Dad: “This is no fun.”) and eating Mexican food (Dad: “I’ll have another margarita, please.”) As for me, I was eager to ride the Astoria Trolley. I’d heard about this alleged trolley for years. I say “alleged” because in all the years I’d been coming for visits, I had never once clapped eyes on it, much less ridden on it. 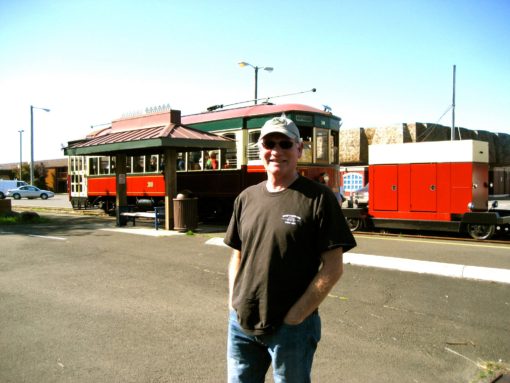 My Mom assured me that the trolley did in fact exist. “You just wave a dollar bill, and it stops for you, ” she said. So I got out a dollar bill and waved it around. “Like this?” I asked. No trolley appeared. “Gosh, if I keep doing this, people will think I’m demented!” At this, Dad chuckled to himself and we heard him mutter, “Hell, I am demented.”

I’m happy to say that dementia didn’t affect Dad’s sense of humor. I’m also happy to say that he did indeed make it to 80. But just barely. He died a little over a week later. In his sleep, in the early morning hours of Father’s Day. With a smile on his face, Ella Fitzgerald on his CD player, and a Dairy Queen Dilly Bar in the freezer of his mini-fridge. 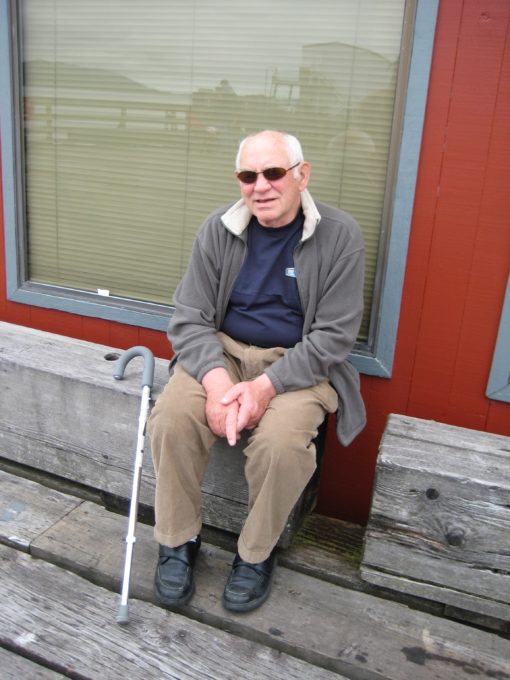 Dad, waiting for the trolley

10 thoughts on “Dad and the Magical Mystery Trolley”