So. 2016 is a Leap Year, which means that February got an extra day. I won’t go into all the scientific and historical stuff you probably skimmed in yesterday’s paper about why we have to tack on a 29th every four years, except to say that it has something to do with the Earth’s Rotation and the Gregorian Calendar.

Your paper no doubt also had at least one cute story about some Grownup who is ‘really’ only 6 years old because his/her birthday falls on Feb. 29. (The NY Times’ choice was a male underwear model.)

Anyway. If I sound a tad cranky, blame February. I’m sure I’m not the only one who thinks February is sort of a bummer. I mean, it’s four long weeks of not-yet-spring that comes along when you’re getting really sick and tired of winter. I bet even the Groundhog doesn’t get that excited about his Day. 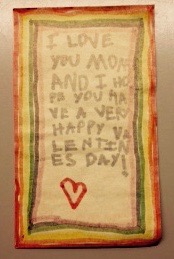 A Valentine from The Child. Extra precious because I had absolutely no hand in making it

Speaking of Days, other than Valentine’s, which can be kind of fun — unless you’re a Mom who has to whip up 36 red-construction-paper-heart valentines and/or pink-frosting’d cupcakes for school — there aren’t even any good holidays in February. Have you ever heard of anyone putting up Presidents’ Day decorations? Poor February. It’s even hard to spell.

When I was a kid I heard a very funny radio essay, probably by Charles Kuralt (very droll, of the late lamented ‘On the Road’ and ‘CBS Sunday Morning’) making a case for eliminating February altogether. Darn it, even with mad googling I couldn’t find the actual piece, but the gist of it was that since February is kind of a downer, we should just, you know, repurpose it. END_OF_DOCUMENT_TOKEN_TO_BE_REPLACED