‘The Colorful Characters of Clinton County’

I was watching a clip of Donald Trump slip-sliding his way down that ramp at West Point and immediately thought of Dennis Rose. “Gription,” Dennis would have said. “Trump’s shoes ain’t got enough gription.”

Well, if “gription” isn’t a word, it oughta be. Dennis used it to describe what was wrong with his own sneakers during a basketball practice one afternoon long ago in the Carlyle High School gym. (I didn’t witness this word coinage myself, those being pre-Title IX days, when the sportiest we girls could get was playing dodge-ball in that same high school gym. While wearing bloomers. Honest. Bloomers.)

Dennis’ locution was colorful, but, trust me, there were other Clinton County denizens who made him seem pasty-pale in comparison.

There was the guy named Bill who rode his bike everywhere. Sure, no one bats an eye at an adult on a bike now (even sealed in Spandex), but back then a grownup riding a bike caused, well, comment. Indeed, we kids were told to “stay away from that man.” 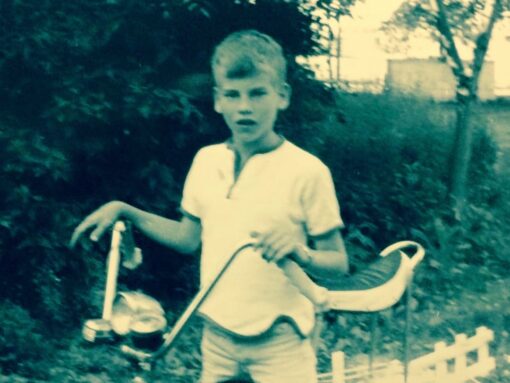 Kids riding bikes was another kettle of handlebars entirely. We went everywhere on bikes. Well, except not to school. Bike riding to school–even on a swell banana bike like Rog’s–was considered very uncool and just was not done