‘We spot a most unusual specimen — and suffer the cosmic consequences’

Nope. That’s not the ‘unusual specimen’ in the photo at the top of this story. That’s Chuck. Or, as he came to be known on this trip (by me anyway) ‘UpChuck’. For reasons which will soon become apparent.

The ‘unusual specimen’ in this story is a bird called, I kid you not, the Potoo. I first heard about the Potoo when The Dude and I were birdwatching in Panama last year. Dude Man kept asking ‘Hey, can you find us a Potoo?’ And Guide Man would just smile and shake his head, as if to say ‘That’ll be the day’. And I’d be like ‘Potoo? Potoo? That’s not a real bird, is it?’

See, I thought The Dude and The Guide were having me on. That looking for a Potoo was kind of like going on a ‘Snipe Hunt’. Which, if you grew up in the Midwest like me, you remember was an elaborate practical joke that Big Boys would play on Smaller Boys, like at Scout Camp. Or sometimes the joke would be played on Naive High-School Girls by Naughty High-School Boys. ‘Hey, wanna go in the woods tonight? On a Snipe Hunt? (Snicker Snicker)’ 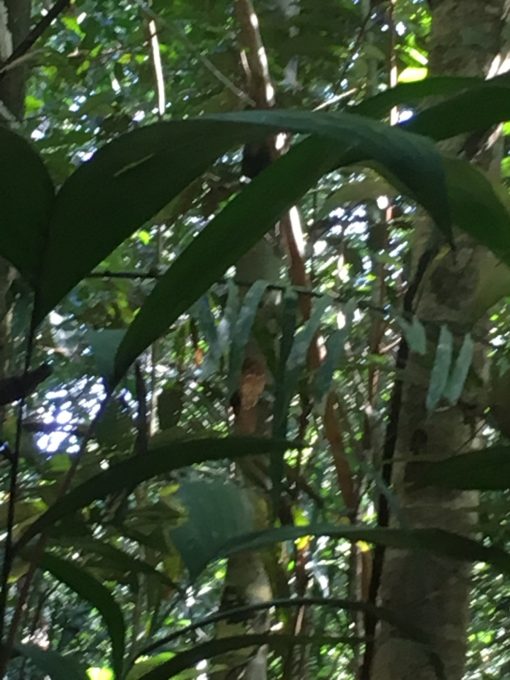 Potoo? Oh, wacky little Potoo? You in there?

END_OF_DOCUMENT_TOKEN_TO_BE_REPLACED

‘Up close and personal with paranha, army ants, and other Amazon locals’

“Don’t look now, but there’s a half-naked man with a machete up ahead on the path,” fluted Paul in his Upperclass Brit Voice. And yes, there certainly was.

This was on, oh, Day Two or so of our Amazonian Adventure. The one where we spent two weeks on a boat traveling to the upper reaches of the Rio Aripuana, dubbed The River of Doubt by none other than Teddy Roosevelt. 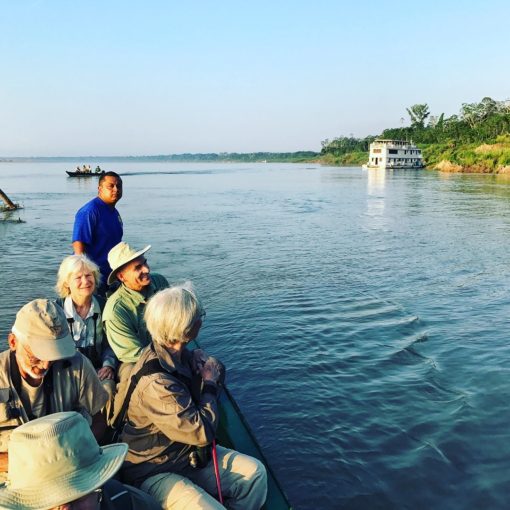 Me, channeling my Inner Teddy on the Rio Aripuana. That’s our Base Boat, the Tumbira, in the background, a tad far away for comfort. For me, anyway

As the days went by we became more familiar with ‘men with machetes’, and actually quite happy to have them around. (In the Amazon, carrying a machete is kind of like carrying a Swiss Army Knife.) 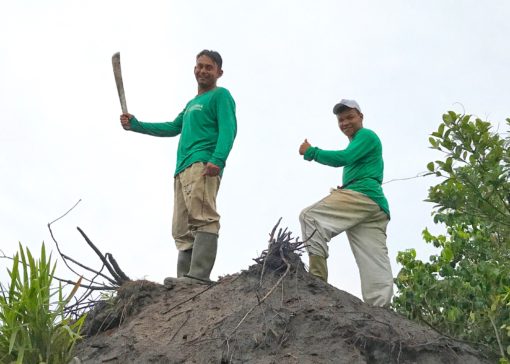 “You call that a knife? THIS is a knife!”

There was a guy we met on another path on another day who even gave our Fearless Leader Bret a bit of a pause. I was transfixed by his Chicago Cubs hat and did not notice that he had been carrying a rather large firearm. Turns out he was out scouting for a jaguar that had been terrorizing his village. END_OF_DOCUMENT_TOKEN_TO_BE_REPLACED