‘On the glories of the Open Road’

Last week’s tribute to my Male Parent and his napping powers included a memory of Dad piloting us on those long drives up to Gramma’s house. (Oldest Younger Brother Scott remarked that Dad was the only person he knew who could ‘simultaneously nap and smoke a cigarette while driving.’)

So true, Scott, so true. But I failed to mention why Dad would get so sleepy on those drives. It was because it was at least six hours to Gramma’s — on charming-but-small-town-clogged two-lane highways — and we wouldn’t start the drive till he got home from work. Sometimes, I remember, we would pull over to the side of the road so everybody, not just Dad, could sort-of-safely sleep. I remember that when we lived in Memphis, and the trip to Gramma’s was more like twelve hours, we had a mattress in the back of the Ford station wagon for the kids to crash on. Very Joad-like, but that’s the way it was.

Why didn’t you just pull into a motel? (you quite sensibly might be wondering) Well, partly it was because this was before there was a huge superhighway system studded with Motel Sixes and the like. There used to be these things called ‘tourist cabins’; I remember staying in one with my Aunt Marilyn when she treated me to a road trip for a high-school graduation present (she’s the saddle-shoed-teen in the shot below), and when we plopped our Samsonites on the bed, a cloud of dust flew up. 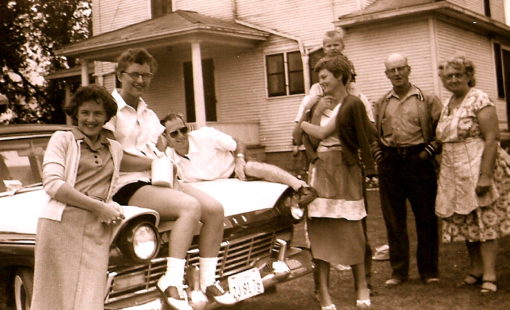 Getting ready to re-pile into the car and head back home after a Peterson Weekend. That’s Gramma and Grandpa over on the right. That’s Mom on the left looking very Jackie O. I was inside the car with the rest of the kids, sulking

And if the trip involved some overnights? Well, that’s why you had a Nimrod camper. That same Older Younger Brother Scott also told me once that he knew he and his wife were meant for each other when he found out her family ‘overnighted’ in a Nimrod too. 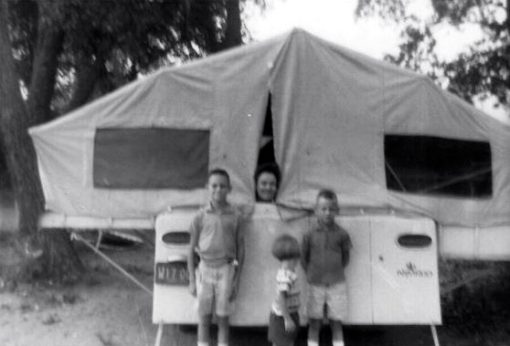 Where we slept if our trip took more than, say, twelve hours. True, there was no pool. But sometimes there was a handy lake we could jump into

Now I have to be perfectly honest here and admit that the whole Nimrod experience wasn’t exactly to my liking. Quarters were crowded (there were seven of us, remember), the canvas leaked, and whatever you ate was cold or cooked on a smelly Coleman stove (instant mashed potatoes, anyone?) 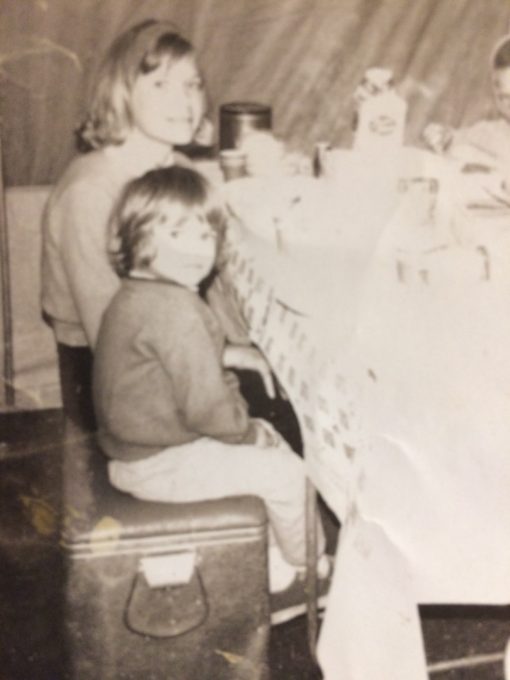 But hey. Drying wet socks on a stick held over a campfire may have soured me on camping, but it certainly did not dampen my fervor for Road Trips. And thank goodness The Dude (like the afore-mentioned Scott’s wife Patty) grew up Road Tripping too. His family, though, did not Nimrod. They actually toured the West in a Winnabago. Cool beans.

In fact, The Dude and I spent our honeymoon Road-Tripping. We rented a car in Lisbon and drove all around Portugal, Spain and Morocco. We did ‘overnight’ in permanent structures, though. Like these government-run inns they have in Portugal called pousadas. And hotels, even, here and there in Spain. Oh, and there was, of course, Malcolm Forbes’ castle in Tangier. You can read about how we got to stay there by clicking here. 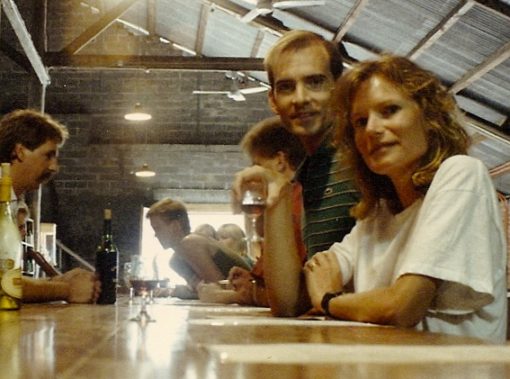 That’s us, looking impossibly young, at a winery in the Hunter Valley on our Road Trip in Australia 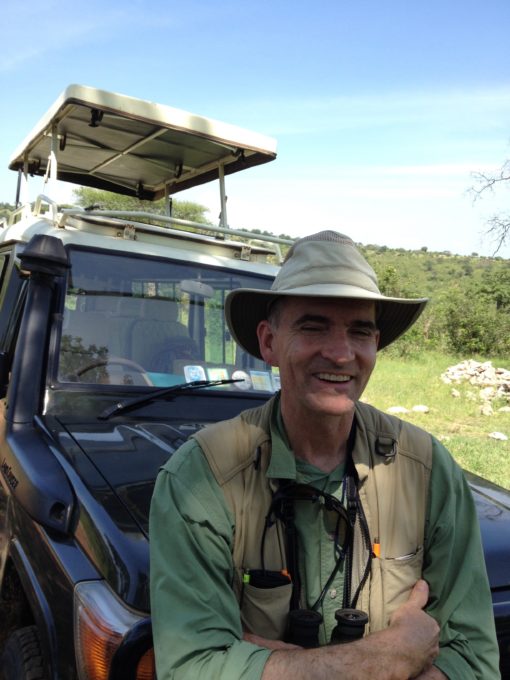 Is it still a Road Trip if you yourself don’t actually drive? On the road in Tanzania

But one of the most memorable Road Trips of Our Marriage was the time we drove with the two-year-old Child from Phoenix to San Francisco. This too, shall get its own story if I live that long and keep on writing. But I will mention now that, adorable though she was, Two Years Old is not exactly an ideal Road Trip age. Even though I sang ‘If I Only Had a Brain’ from the Wizard of Oz like a Mom on rewind (she would shriek if I tried to cheat and hum a few bars), on more than one occasion during that week we were tempted to leave her beside the road.

Speaking of The Child, I’ll quickly note that she’s grown up enough now to go on her own Road Trips. This is tricky though, since like many New York City born-and-bred kids, she doesn’t really drive. I mean, I remember when my friends and I took Drivers’ Ed in high school. The guy who taught gym and social studies was the instructor. And you were excited. All you could think about was ‘when I get my license’. It was like freedom in the form of a little card. Well. The Child was like, ‘Drive? When will I ever drive?‘

When you live anywhere besides New York, that’s when. Or when you take a Road Trip, silly. And here she is, in Iceland. Where she and her friend Meredith could do very little no-experienced-driving-damage, the roads being so empty and all. Though the door of their car did blow off at one point when they stopped to take a picture. The car rental girl didn’t bat an eye. ‘Happens all the time,’ she said. 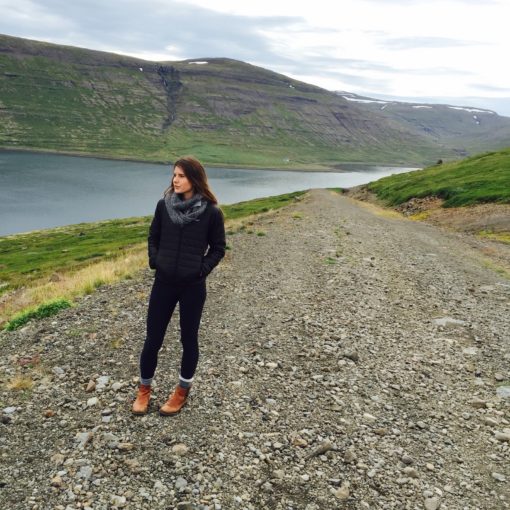 The Child takes a break from “driving” in Iceland. Note extreme emptiness of Road. Whew

Okay okay. This post is getting almost as long as a Road Trip. Got to wrap things up. There are beds to be made, laps to be swum, and kitty litter to change. See you here next week — or maybe out there on the Open Road. 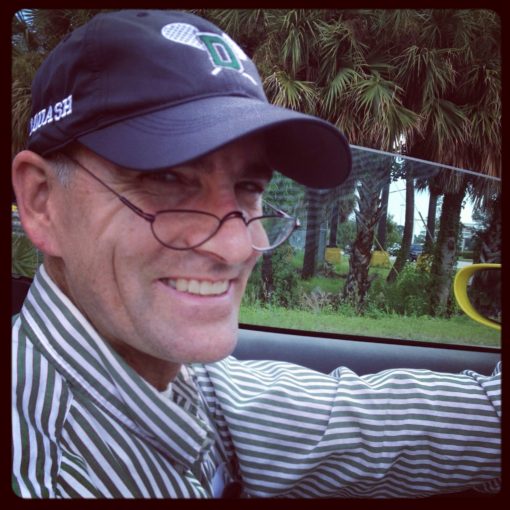