‘It was one of my Dad’s favorite jokes.’

Last week I regaled you with tales of my wiry little moving crew schlepping huge heavy loads up multiple flights of stairs. Did you know there is a moving company in New York called Schleppers? I’m kicking myself now that I didn’t use them for their name alone, though those Big John’s guys were real sweethearts. (“Ma’am, where do you want me to put this anvil?” is something they were probably thinking but had the good grace not to say.) 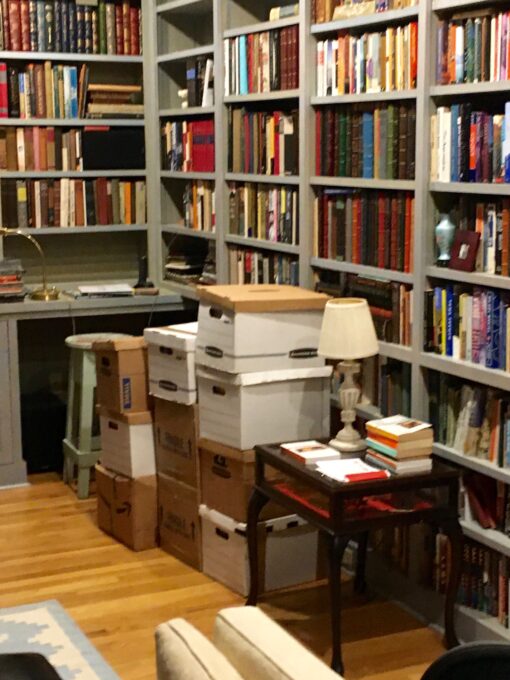 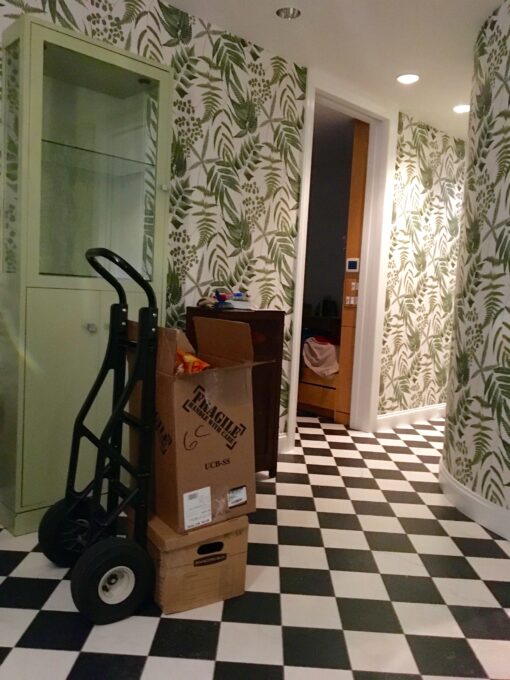 See, we didn’t think it made sense to hire movers to move our stuff over to the Ken and Barbie House. After all, it’s only three blocks away from our former digs. And, since it’s so small, we couldn’t move any big furniture there. (The biggest thing we moved is my former bridge table — now turned (ahem) dining table. And it’s, oh, about 2′ x 3′.) 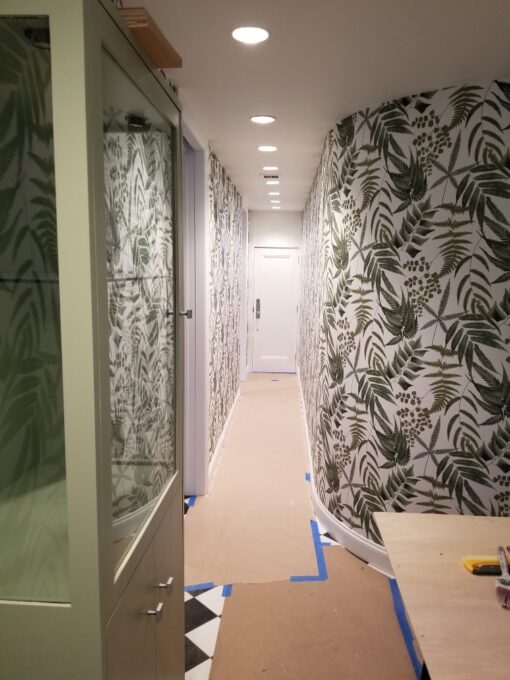 Also, there’s the fact that our hallway is seriously narrow. Even really careful moving guys have been known to bump and bonk. (The guys who moved stuff for the stagers when we put the old apartment on the market — see “Alice Doesn’t Live Here Anymore” for the sad sad story of “staging” — dropped my green buffet, gouging a chunk of floor. Ooops.) Now we have that gorgeous wallpaper in the new place, and thought it best to hold ourselves responsible for any gouging that might occur.

So, The Dude Man and I are, like, “Hey, we can do this move ourselves! We’ll just move a little bit every day, and it’ll be done in no time!” Well, the “little bit every day” has turned into five or six trips per diem, because, basically, moving all the big stuff out of the old place meant we had no bed, no table, no chairs, no nothing. So we had to start staying in the new place. Which, until we schlepped it over box by dolly-fied box, had no bedding, no tableware, no — well, you get the idea. 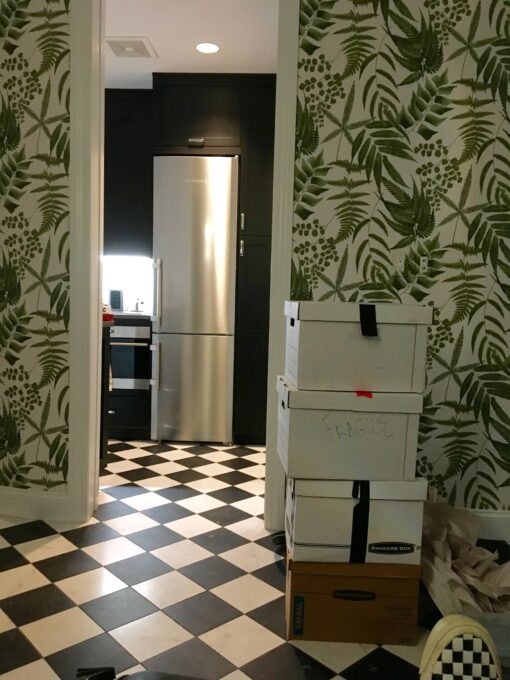 A stack of toted boxes ready to be dealt with. That’s me — or at least my Van’s-clad foot — contemplating the task at hand

I have to wonder what the friendly cops at the 19th Precinct think. We see one or two of them out surveying their domain every time we trundle past. With my bad back (herniated disc; I don’t recommend it) I usually am “toting”, say, a vacuum cleaner tube or a lamp. (Last night I cradled my ostrich egg painted like a globe.) This is while Dude Man is pushing or pulling the dolly, which sometimes has six or seven boxes stacked on it. Yesterday, he dollied over the safe. 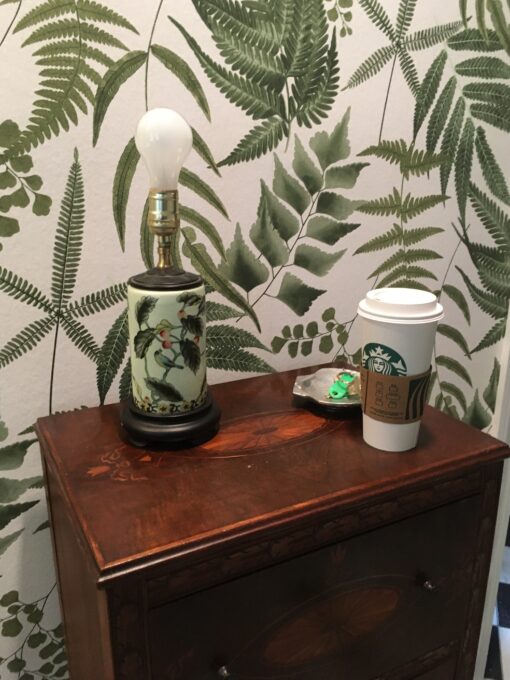 Still life with lamp and Starbucks

Of course, once we start unpacking (which because my toting is limited I’m pretty much in charge of) we jolly well have to repack a lot of it and tote it right back — because, goldarn it, it just won’t fit. It’s kind of like when you over-order at dinner, that is if you can remember what it was like to order dinner. This has happened with a couple of pans, a rolling pin, a (what I thought was small) mixer, a meat-loaf tin, and assorted other odds and too-big ends. My kitchen “eyes” were bigger than my kitchen “stomach.” 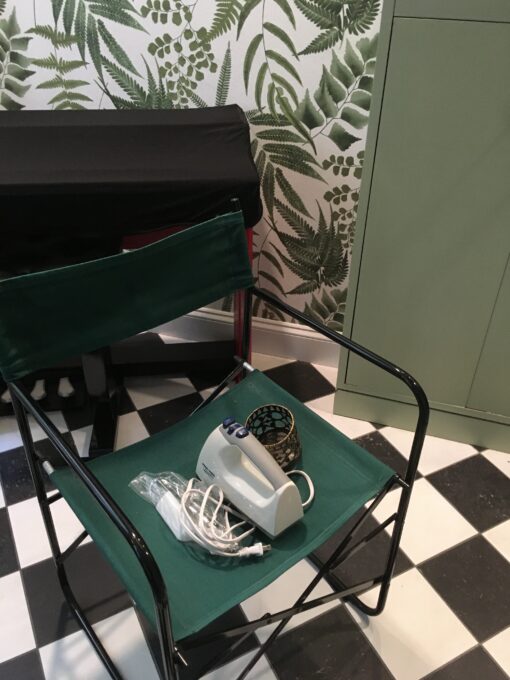 Some sad items that didn’t make the kitchen cut

But, you are probably asking by now, what the heck does all this have to do with an Indian and a teepee? Now, please don’t judge me too harshly. It’s a pretty awful joke, but if you knew my Dad, you probably heard him tell it. Most likely while doing his “whoa back” move, where he gets closer and closer to you while winding up to the punchline. (You can read about this in “Let Sleeping Dads Lie.“) And if you like silly jokes (most much better than the one I’m going to tell you), check out “Kangaroo Walks Into A Bar.”)

Okay, here goes. There was this Indian who really loved living in his teepee on his little patch of wilderness. His life was simple, but it suited him just fine. Well, along came some City Folk who wanted to buy his land, probably for some dumb development. They offered him a good price, but the Indian — whose name was “Bowels” (Don’t say I didn’t warn you) — said, “No deal. Bowels no move.” The City Folk offered him more money. Still the same answer: “No deal. Bowels no move.” This happened again and yet again. The City people were desperate (and devious). They really really wanted that land. So they slipped some Ex-Lax into Bowels’ hominy. And lo and behold, next time they offered to buy his land, he stammered out, “Bowels move now. Teepee full of S**T.”

Well, Dad. Lately I’m reminded of you — and your joke. Because, goldarnit, our teepee is definitely full of S**T. 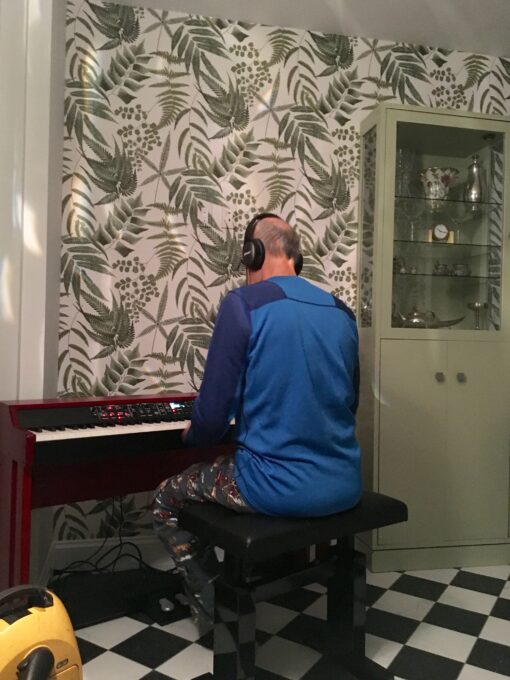 In closing, here is a concert by Piano (Dude) Man. You can’t hear it because he’s using headphones. Yes, that’s a vacuum cleaner to his left. And yes, that’s a bourbon on the floor next to me in the picture at the top of this post

10 thoughts on “The one about the Indian and the teepee”