‘On the Streets of Laredo, way back when — and now’

“Nobody goes to Laredo,” says my Texan Friend. Well, call me ‘Nobody’ then, because I’ve not only been to Laredo, I’ve been there twice.

This most recent time shouldn’t really count, since The Dude and I were there not even a whole day, Laredo being merely the ‘end point’ of our birding adventure to the Rio Grande Valley, tales of which I will regale you with another time. Or not. But count it I will, since we did in fact “go walking on the streets of Laredo”, to quote the Immortal Johnny Cash.

We didn’t spy any “young cowboys all dressed in white linen”. Or any cowboys at all. Well, except for these hombres: 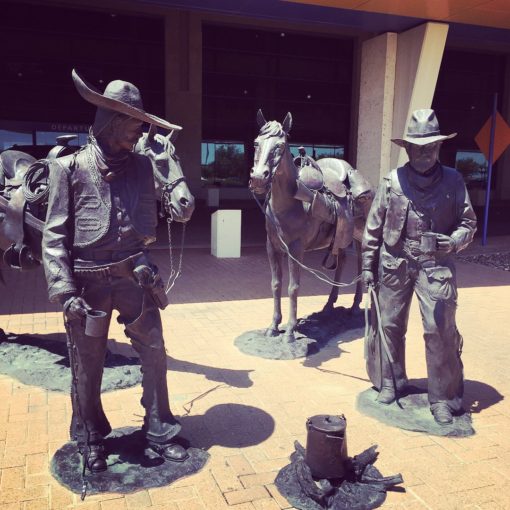 The only cowboys we spied. And they were hanging out at the airport, not walking on the streets like any self-respecting Laredo cowboy

No, the time I spent in Laredo that really counts is the time I went there as part of a trip made with my Gramma and Grampa Peterson and my Aunt Marilyn. 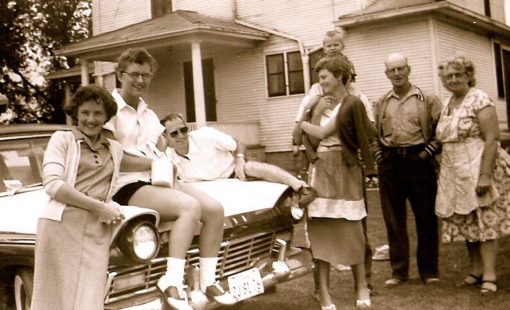 Another Road Trip, another time. That’s Aunt Marilyn perched on the hood of our station wagon, G’ma and G’pa there on the right. I was probably in the car, sulking

This trip (which was, of course, a Road Trip) was a gift from my Aunt Marilyn in honor of my graduation from eighth grade. Which meant I was thirteen at the time.

The plan was to drive from Northern Illinois to Mexico. Yes, I said drive. My Aunt Marilyn made a memorable plane trip to Sweden once with my Aunt Net. But my grandparents, as far as I know, never set foot inside an airplane. 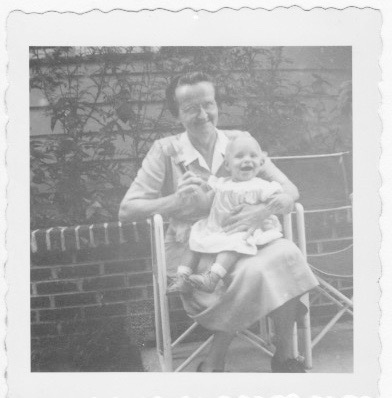 Aunt ‘Annette’, with me on her lap. We kids thought she was called ‘Net’ because she wore a hairnet

My grandparents, both the Petersons and the Henrys, were farmers. Which meant they never ever went on vacation. I mean, somebody had to be around to milk the cows. I’m still not sure how they managed to go on this trip. Maybe they and some other Farmer Relations had some arrangement to cover for each other, cow-wise. 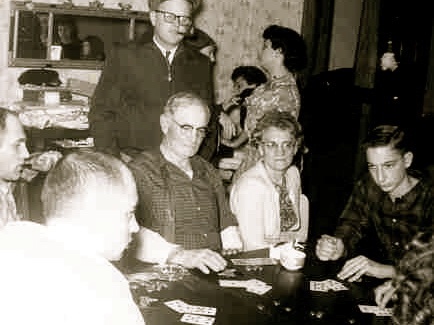 My Henry Grandparents on ‘vacation’: cleaning up at poker in their kitchen

So. Back to this graduation-gift trip. Like I mentioned, we drove. Since we couldn’t, naturally, drive all the way to Mexico in one go, we stopped along the way at these places called ‘tourist courts’. These were inexpensive motel-like places, usually with rooms in a row or sometimes even little cabins. Sort of like the Motel Sixes of their day.

My Gramma and Grampa had one room, and Aunt Marilyn and I would share another. I remember after one particularly long day of driving Aunt Marilyn tossing her suitcase onto our chenille-spread-covered bed and raising quite a cloud of dust. 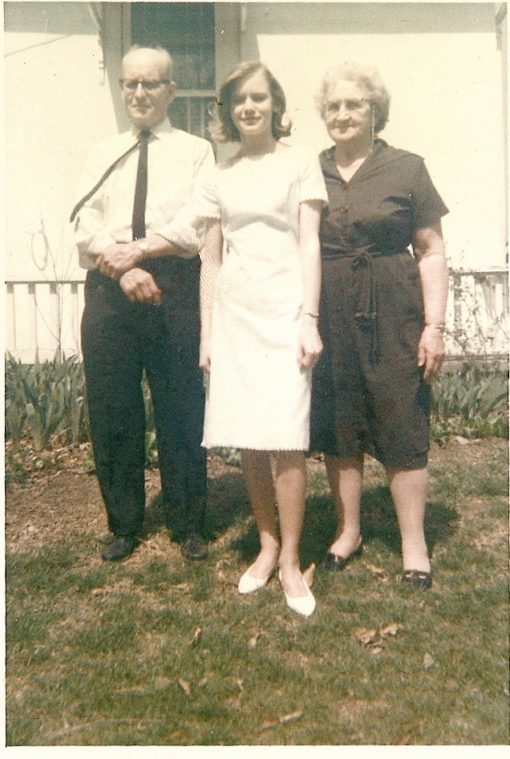 Me with Peterson Grans on the occasion of my Lutheran Confirmation. Same year as 8th-grade graduation, but even more important

My grandparents weren’t cheap, but they had scrimped and saved all their lives and weren’t going to change their ways while on vacation.

We did stay at a fancy resort in the Ozarks on this trip. I’m not sure how my grandparents had heard of this place, but I do know that the attraction was that we could stay there for free. All we had to do in return was listen to a presentation about buying time shares in the place. As if.

Many of the details of this trip are understandably blurry, this being Way Back When. I do recall that while in Texas we visited the LBJ Ranch. Why, I’m not sure, since my grandparents were diehard Republicans. In fact I remember that my Aunt Marilyn had a framed photograph of Dwight Eisenhower hanging in her bedroom. I kid you not.

We also visited the Alamo. I distinctly remember my Aunt reading the plaque inside the very tiny fort (I think my living room is bigger, and I honestly don’t have a very big LR) and remarking, “We lost? All our guys died? Then why do we ‘remember’?”

And I remember that we would stop to eat wherever my Grampa saw trucks parked. (No, there were no fast-food places then. The closest thing to a chain was Howard Johnson’s, and that was way too fancy for Grampa.) He said that truckers knew where the best food was. Probably still true, though I haven’t checked in a while.

Anyway. We finally made it to the Mexican Border. Which is right there in Laredo. These days there is a humongous towering gate-like structure there, right next to an even-more humongous outlet mall. 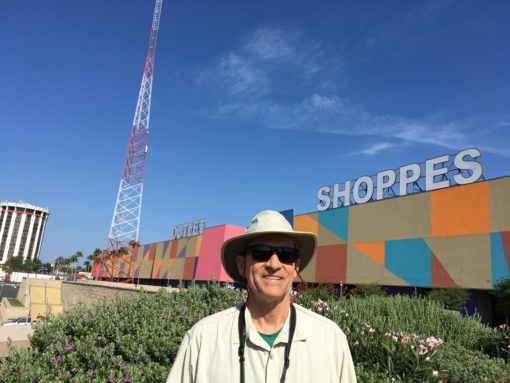 But back then you could just drive your car over the bridge to Nuevo Laredo, and voila! you were in Mexico. Which is what we did. Grampa P parked his Ford and we walked around a bit so we could say we’d been in Mexico. Pretty exotic stuff.

I don’t remember what we did there exactly, except for the walking around. But I do remember that when we got back to the car, it was surrounded by all these little Mexican kids. They had buckets and cloths and were washing the road dust off that Ford and shining it up real nice.

My Grampa looked a bit bewildered and amazed at this outsize gesture of foreign hospitality. We smiled at the kids, they smiled back — and then we got in the Ford and drove on back over the bridge to the good old U S of A.

To the end of his days, I’m sure my Grampa thought the reason they were holding their hands out to us was to wave goodbye. 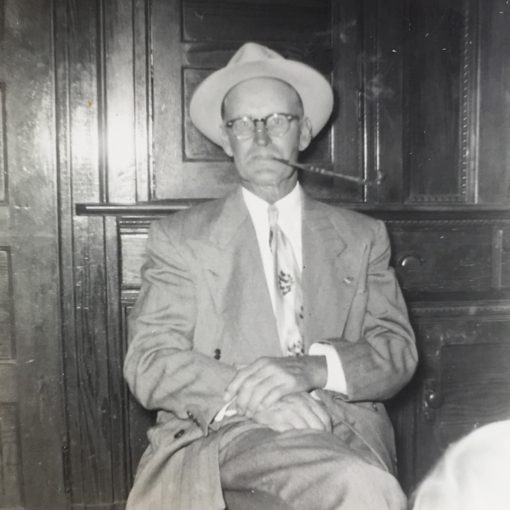 Another picture of my Grampa P. Just because I have it, and it’s cool