‘The story of a girl (almost) named Zeus’

Our Memorial Day tradition is to have our two super-adorable grand-nieces (yup, grand-nieces), Miss Just-Two and her older sister Miss Almost-Five, come down from the Boston area to help us celebrate the first official weekend of summer. Oh, okay. Their parents get to come too.

Last night we were polishing off our umpteenth bottle of wine (with the parents, not the adorable grand-nieces) and got to talking about how kids get their names. I guess things have changed a bit since we named The Child, because these parents confessed that Miss Almost-Five went four days without a name. Even more startling (to us, anyway) was the fact that Miss Just-Two went nameless for four whole months. During this time, she was known to all and sundry as Baby Girl. Or, for officialdom, as Baby Girl Last Name.

The Dad (The Dude’s older brother’s son) said he finally had to give in and name Baby Girl because, without a name, she could not get a social security number, and without a SSN, she sort of, well, didn’t exist. So, name her, they did. At least they didn’t let her name herself, which was Picabo Street’s parents’ genius idea. (Poor Picabo didn’t have a name till she was three years old.)

[I’m sure you’ll understand if I don’t reveal Miss Just-Two’s much-delayed name, nor her sister’s, adorable though they may be. I don’t want to jeopardize their privacy. Mostly, I don’t want the parents to get mad and not come back next Memorial Day.]

But back to the Naming Thing. Twenty-five years ago, when The Child was on her way, The Dude and I spent hours of pre-family fun thinking up names. (Actually, arguing about names.)

Before we knew The Child was to be a girl, my favorite Boy Name was Henry. That’s because my last name, before marrying The Dude, was Henry. Neat, huh? Well, I certainly thought so. But when I shared my neat naming thought with The Dude, he said ‘No, not Henry. Henry is weird. If we name him Henry, everyone will tease him. And they’ll call him Hank!‘ (Like this was even weirder.)

I kid you not. Zeus. And Henry is weird? 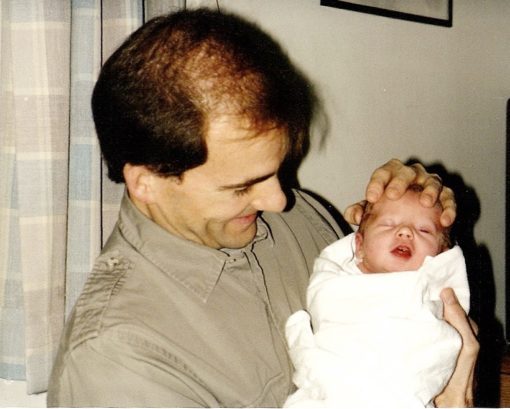 The Child, right about the time we didn’t name her Zeus. Or Andromeda

There must have been something in the water that winter. Or perhaps The Dude was reading a lot of ancient history. Because, for some reason, even after we found out that The Child was going to be a girl, he kept zeroing in on Greek names.

He came up with Ariadne. (No one will be able to pronounce it.) Chloe. (Ditto, at least in those days.) Persephone. (Double ditto) Penelope. (People will pronounce it to rhyme with ‘cantaloupe’.) I finally put a stop to all this Hellenic nonsense by suggesting, with a sweet smile, ‘Medusa’. 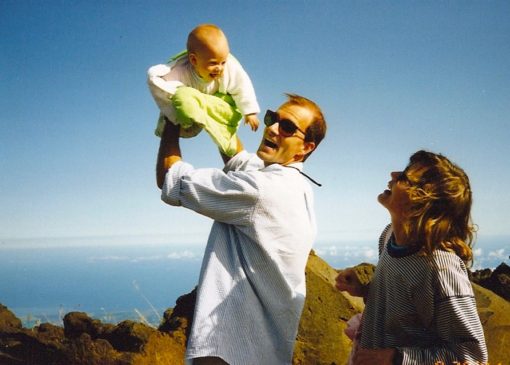 The Dude, about to sacrifice The Child to the naming gods (we’re on the lip of a Hawaiian volcano, Haleakala, here)

So then we checked out our respective family trees. Mine had a Beatrice and a Josephine. (Hmmm.) His had a Frieda and an Elsie. (Double hmmm.) We could, perhaps, have named her after both our mothers. In which case her name would have been Myrna Bertha. Or Bertha Myrna. (No comment.)

I’m not really sure where ‘Samantha’ came from. But we both liked it, so Samantha it was. And is. Believe it or not, The Dude’s Dad had never heard of the name Samantha, and thought we’d invented it. Guess he didn’t watch a lot of TV. (Incidentally, our Samantha was once mistaken for a witch. You can read all about it here.) 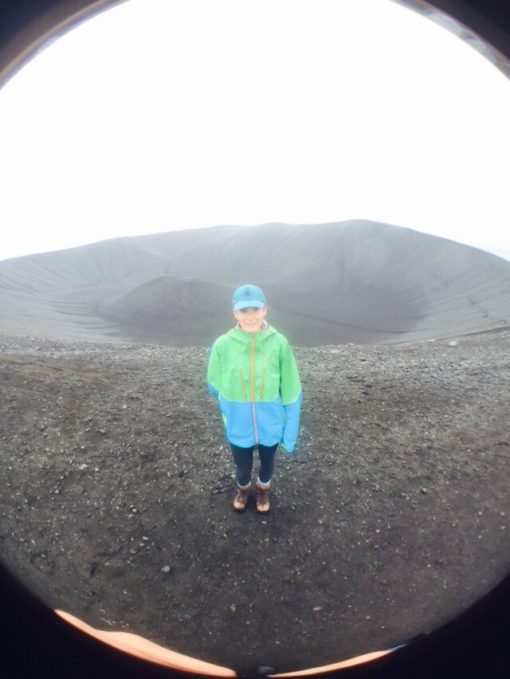 The Child in Iceland. Communing with the Norse gods? Practicing her witchcraft? She’s on the lip of a volcano, at any rate

I can’t wrap up a baby-naming post without mentioning the true story of my Cousin Marcia’s best friend Shelly. Shelly’s last name was (and quite possibly still is) ‘Bottom’. Shelly had a sister named, I kid you not, Sandy. And a brother named Rocky.

And guess what her father’s name was?