So last time I told you about how We Whitmores were recruited to help save some purple martins from starvation. The martins were huddled in their gourd condos out at SoFo (the South Fork Natural History Museum, founded by Idiosyncratic Family Friend Andy), having been caught in an unseasonable cold snap during which their regular flying-insect food supply was grounded.

We rescued them by tossing crickets into the air — crickets which had been bought in bulk from a pet supply place. Overheard: “Do we have more crickets coming in?” “Yes, 1500 are due tomorrow.” 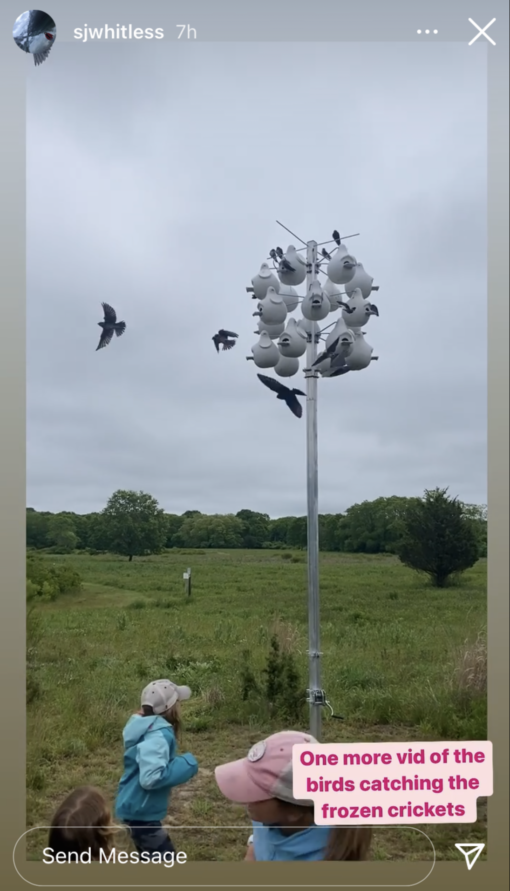 (At which point I’m picturing chirping boxes being unloaded by a quizzical UPS guy — or maybe just crickets, 1500 strong, marching en masse up to SoFo’s front door and volunteering for duty.)

Anyway. Martin Man, who directed our feeding efforts, would put a big ole Teddy Grahams container full of crickets into a freezer for seven minutes to stun them, after which we would throw them into the air (Martin Man used a slingshot) where the hungry martins would chomp them (you could actually hear their birdie jaws snapping) mid-swoop. 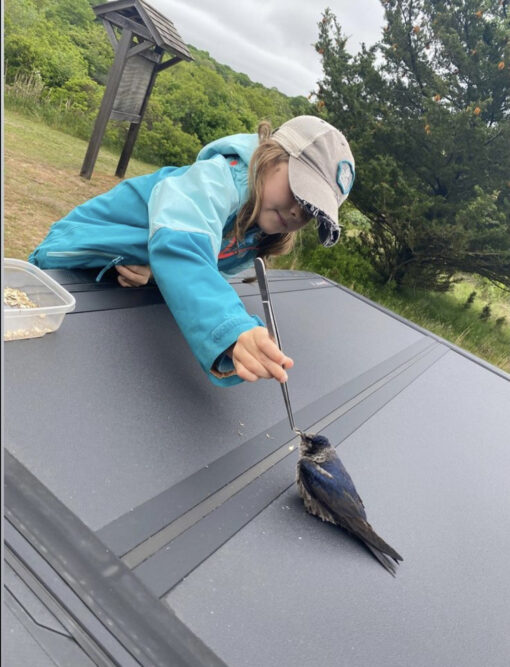 One weakened female got her crickets via cute kid and tweezers

Now, in case you’re feeling sorry for those crickets being eaten, let me share a story about how they’re not all that, well, innocent.

Back in the Day, when The Child was an actual child instead of a glamorous just-married grownup, we lived in a very tiny house on a spit of land called Gerard Drive. (We now live in an even tinier apartment called the Ken and Barbie House, which you might enjoy reading about if you get a kick out of picturing people squeezed into cramped quarters.) 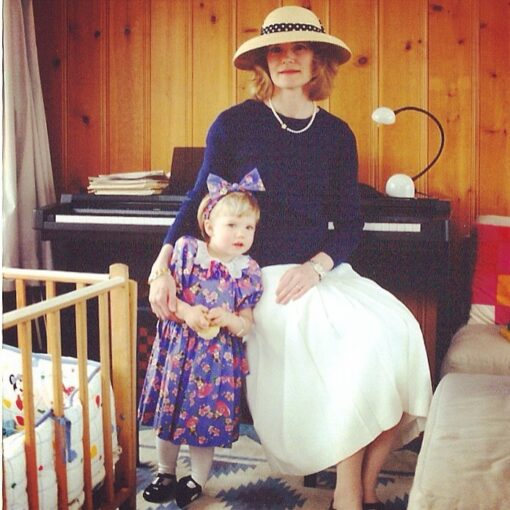 How small was this house? This house was so small that the living room was also the dining room which was also The Child’s bedroom. It was so small that we couldn’t fit in a staircase so we had a boat ladder attached to the wall to climb to the sleeping loft. The good news was that I could clean it stem to stern with a toothbrush in about ten minutes. 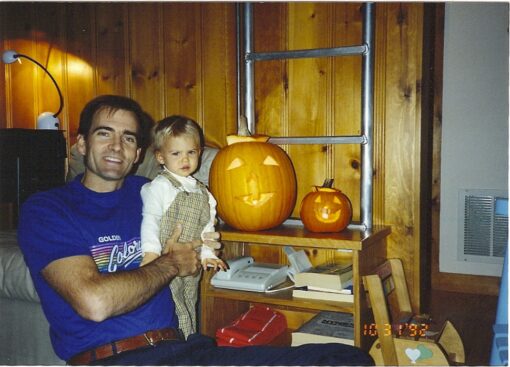 Child and Dude next to boat ladder. Which was also our telephone table and pumpkin display shelf

So. About those crickets. One night we had just settled in to our tiny bedroom (no closet; clothes were stashed in drawers built into the bed) when this chirping starts up. Now, you may think chirping would be a comforting, soothing sort of sound. Nope. It’s more like a dripping faucet with insect overtones. You lie there, listening. And waiting. Until you can’t stand it anymore and just have to get up and find the darned thing. And, since crickets throw their voice, that can be murder. (So glad I cleaned the house with that toothbrush, since I’m scooting around under the bed on a cricket hunt.) 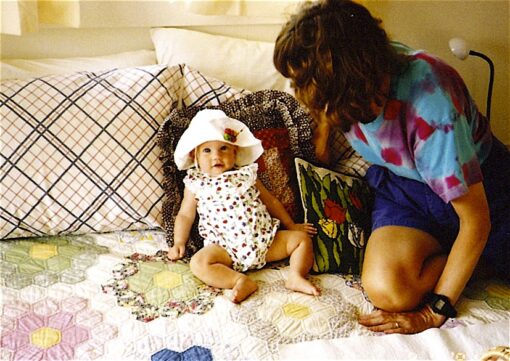 That’s me, not crawling around under the bed looking for crickets

Speaking of murder, I didn’t want to harm the crickets — I just didn’t want them chirping in my bedroom. So I would painstakingly scoop them up using what I called the Cricket-Catcher Kit, which consisted of a plastic cup and a magazine blow-in card. Clamp the cup over the cricket, slide the card under, then carry the whole Kit and Kaboodle to the door and toss the cricket out. Voila!

Well. This system worked pretty well until one Friday night when I arrived at the house after a long week toiling in the City. I opened the door and saw that the floor was moving. I turned on the light to see what the heck was going on, and saw nine zillion (give or take a zillion) crickets hopping up and down — completely covering every inch of the floor. (Not a great deal of floor; it was a small house, remember. But still.) 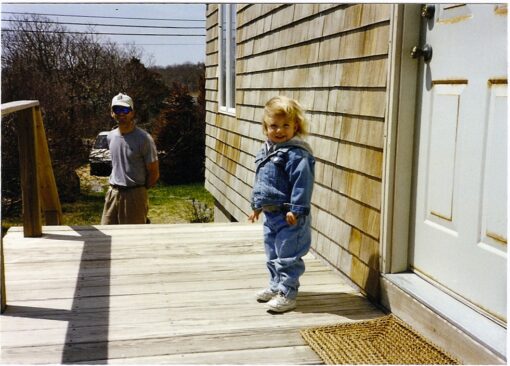 Child at the front door of the once cricket-infested house

No Cricket Catcher Kit this time. Nope. I grabbed our vacuum cleaner and sucked those little critters right up. I figured it was them or me. And when Dude Man arrived he caulked all around the baseboard so none of their cricket friends could sneak in.

This episode happened in the fall when the crickets were looking for a nice warm home. Next summer when The Dude was looking for his flipflops he discovered they had been nibbled down to the soles. (Rubber is cricket for “dinner,” I guess.) But we discovered that, for dessert, they really like paper mache. The Child’s set of Madeline finger puppets — Madeline, the Torrero, Miss Clavel — had been nibbled down to nubs. Yup. “Eat, or be eaten.” Only not by us — by purple martins. 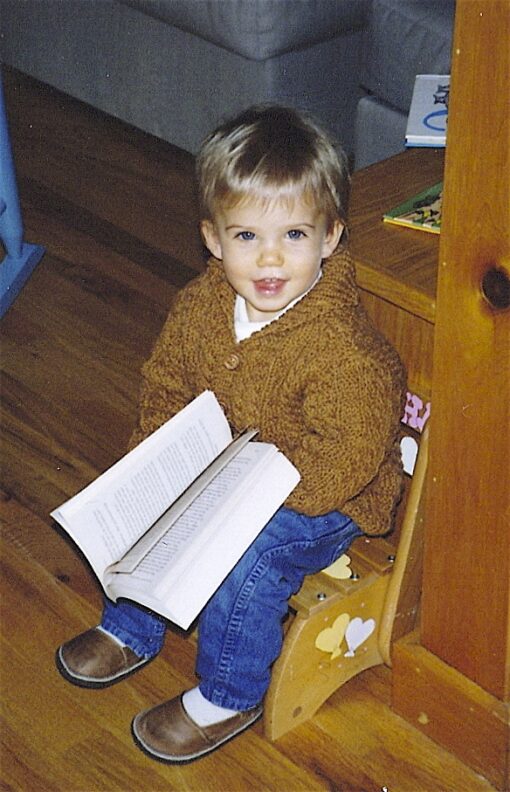 No photos exist of the Madeline finger puppets, even pre-chewing. But here’s a cute one of the Child reading

4 thoughts on “The time crickets ate The Dude’s shoes”