‘When saying it wrong is too cute to correct’

I was feeling kind of empty, the Australian Open being over and all (oh where will I get my Federer Fix?), so I called my Mom.

(Let me say right off the bat that I am ever so grateful to have a Mom, and that having one as smart and funny and almost-always-available by iPhone as mine is, well that’s just cosmic icing on the cake.)

So, anyway. After discussing various relatives and their illnesses and books and movies and baseball (she doesn’t follow tennis, but I love her anyway), and the Fate of the Nation in General, we got around to my blog. And the fact that my Mom had, yet again, tried to post a comment that didn’t ‘take’. (We won’t go into technical details, except to note that my Mom is extremely tech-savvy, more than I am, in fact. She has personally designed her own emoji. So I am stymied about why/how she can’t post comments. Sigh.) 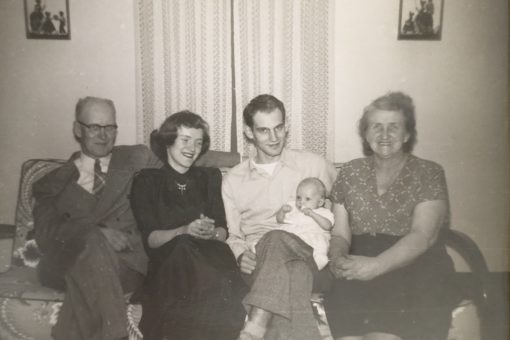 My Mom and Dad and my Peterson Grandparents, when I was adorably small and in no need of shoes, red or not red

Her comment? It was in reference to last week’s post which, if you recall, was about me feeling like it was about time already to be giving away certain stuff in my closet and was titled ‘At least it’s not a dead-squirrel stole’.

She said that she’d wanted to say that, when we kids were little, we called furry accessories like the one in my story ‘mink stoves’. She said she never corrected us because it was so darned cute. (And, um, it is pretty darned cute, if you don’t mind dead-animal malapropisms.)

Then she went on to remind me of other childish slips of the tongue (or whatever you want to call them) that were too cute to correct. Like calling the (then) tallest building in the world the ‘Entire State Building’. (Childhood Logic: we thought it was called that because it was as big as the entire state.) 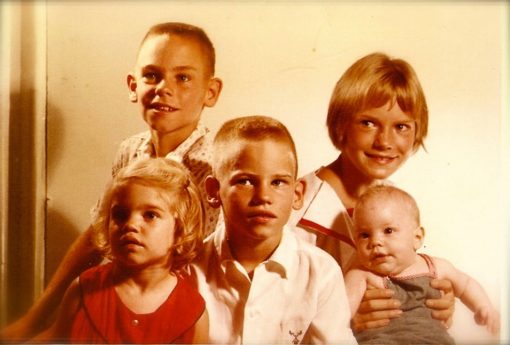 The Whole Bunch of Us. It was summer vacation, but nope, we were not visiting the Entire State Building

This reminded me (don’t ask me how) that we used to think that ‘fart’ was pronounced ‘fort’. If one of us — or one of our odiferous little friends — um, ‘cut one’, we would wave our hands madly, and while shaking with laughter, shriek “Who forted?!?” 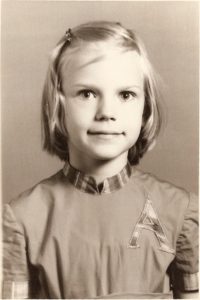 Me, in Second or Third Grade, looking rather like I am stifling laughter (if not a ‘fort’)

This Bathroom Humor even made it into the classroom. We had this third-grade teacher — Mrs. Nothaus was her name — who had a regional accent that meant she pronounced ‘fort’ just like ‘fart’. Even the kids who knew the difference cracked up when Mrs. Nothaus mentioned (in the context of a history lesson) that the pioneers had kept the Indians at bay with their ‘forts’.

But back to the red shoes.

When I was a very tiny girl, my favorite footwear was a pair of (very small) red shoes. I don’t remember them, but my Mom sure does.

And the red shoes-on were my favorite. 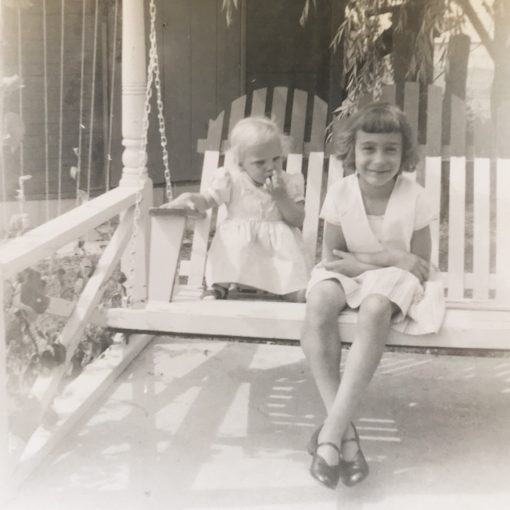 Me with my Aunt Susie, who was only five years older than me. I’m thinking this is how I got my Red Shoe Fixation

One day my Gramma was in charge. And, even though she had raised five children of her own, thank you very much, it’s different when you are in charge of Somebody Else’s Kids, even (or perhaps especially) your own daughter’s. Added to this was the fact that she had to drive somewhere. Alone. With me.

She knew how to drive, sure. But she hated driving. And it didn’t help matters that I was the kind of kid who didn’t sit still much. (Remember: this was waaaay before you were required to strap your child into a car seat; why, we didn’t even have seat belts.) So, while poor Gramma was carefully navigating country roads, I was carefully removing my little red shoes and socks — and throwing them, shoe by shoe, sock by sock, out the car window.

My Mom says Gramma went back and found the red shoes. But the little white socks? Fluttered off into the cornfields, never to be seen again. 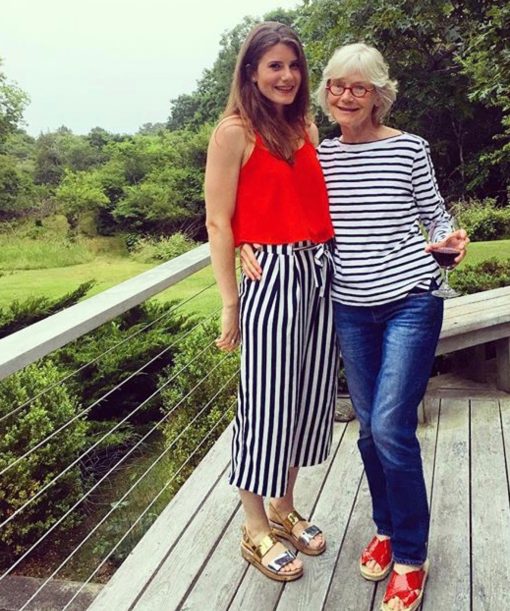 I still like to get my red shoes-on. But my hottest accessory is the one on my right arm