‘The Little House that could. For a while, anyway’

A few weeks ago I told you about sharing a very small beach house with a couple of necessarily very small people.

This week’s story is about an even smaller beach house. At 450 square feet (this included the deck), it made the share-with-the-short-people boat house seem like the Taj Mahal. But at least it was ours-all-ours. It was the first house we bought, and we didn’t have to share it with anyone. Well, at least not till The Child came along.

This house was so small (around 20×20; think about it) that the whole thing could fit into the kitchen of the house we have now. And, trust me, this kitchen is pretty much a normal-sized kitchen. But darn it, that Gerard Drive house was cute. And located right on the water. Gosh, it had water on two sides. 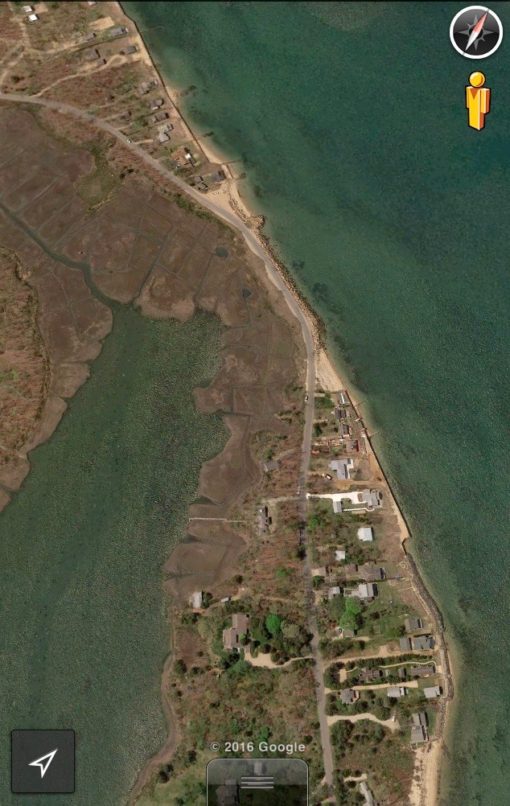 Our teensy little house was the second one from the top (right after the squinched-in bit) on that skinny little road running down that itty-bitty piece of land that looks like an appendix. Or a Junior Florida. Or something

How could we afford this waterfront-front-and-back property? Well. The wiring was spaghetti, the insulation was nonexistent, and the plumbing? Well, when you turned on the shower, the water came on just fine — but in the closet. So we basically had to rip it down to the studs and start over. (The studs, incidentally, turned out to be recycled burned timber. Sigh.) 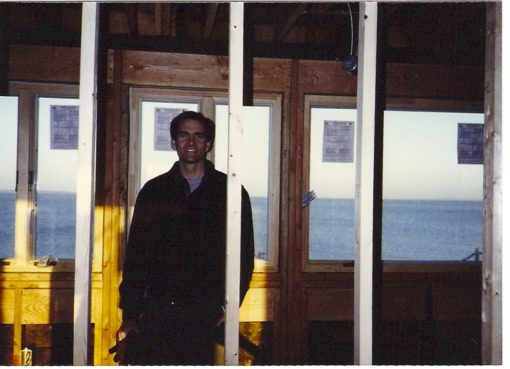 Looking from our bedroom into our kitchen during our ‘remodeling’. The good news — and bad news? That’s Gardiner’s Bay right outside

Well, every renovation has a silver lining. Or, um, a price that would equal, like, tons of silver ingots. But we ended up with the snuggest little shipshape house you ever did see. Everything was designed like we lived on a boat: no wasted space at all. No room for a closet in the (one) bedroom? Fine. We had a bed built with drawers in it. No room for a second story? Fine. We put a boat ladder up to a ‘loft’ (ten square feet with a futon). Add some skylights and sliders to the afore-mentioned deck, and we had ourselves all the sun-drenched room we needed. And boy, was that house easy to clean (!) Ten minutes, tops, and that included scrubbing the (one minuscule) bathroom. 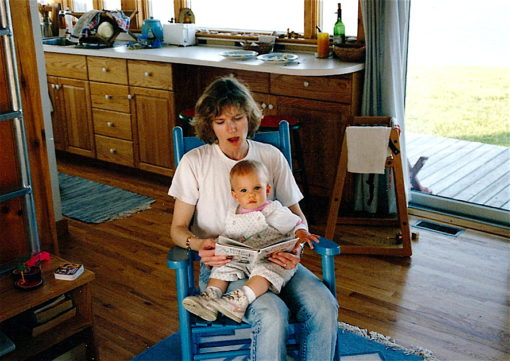 Me, in the living room/kitchen/dining room/Child’s bedroom of our refurbished dream home

And yes, not only was our house designed like a boat, living here, even if only on the weekends, was like living on a boat. Water to the front of you; water to the back of you. But unlike on a boat, there were neighbors Monopoly-Board close to the right and to the left of you.

It worked, though. Because everyone played by ‘the rules’. Which meant that you sort of pretended that your neighbor wasn’t there. Even if the neighbor to the right was tinkering with hulks of junked cars. And if the neighbor to the left (a sex therapist) was sunbathing topless, tossing a big ole lobster pot at her husband, and/or breast-feeding her five-year-old. 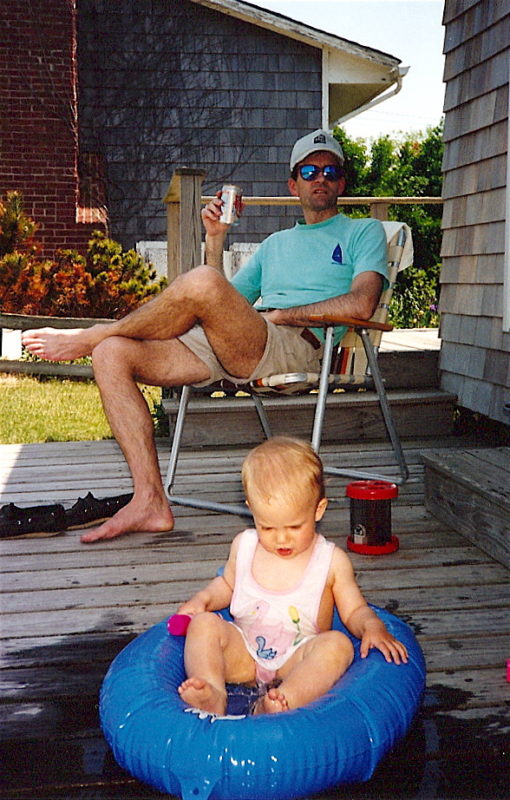 This house may have been small. But it had room for a pool. (Notice junker-car-neighbor-guy’s house just inches from ours)

I could go on and on about how fun it was out there on Gerard Drive. How we’d drive to the firehouse for potable water. (We had a well, but — urk — you couldn’t drink that mineral-filled stuff). How I’d bike to the Springs General Store for cranberry scones. How we’d toast the sunset with a sippy cup (Child) and a G&T (me). But I’d be here all day, and so would you. So I’ll cut to the chase and tell you about those pesky storms. 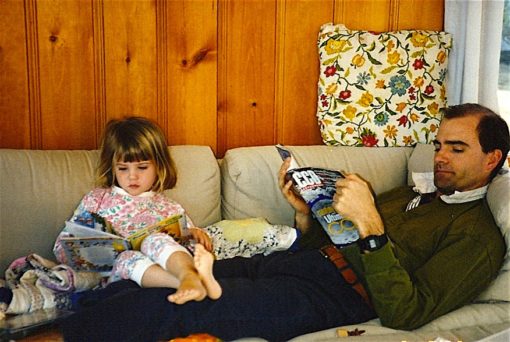 The Dude and The Child relaxing between storms. I”m thinking after Bob and the Perfect and the Easter Storm, but before the Christmas One

The first one was Hurricane Bob. We’d only been in our newly-rebuilt (notice I’ve stopped calling it ‘remodeled’) house a couple of months when a guy dressed like Paddington Bear knocked on our front door and told me I’d have to evacuate. I was alone (well, except for The Child) and still on maternity leave, and I definitely did not resist. I got The Child and the heck out of there as fast as I could.

Well. Bob ate our front yard. But (pretty much–whew) left our poor little house alone. But then, just when we’d decided that half a yard was better than none, we got slammed with what everyone here called The Halloween Storm. But that everyone else called The Perfect Storm. Now, true. We weren’t out on a boat that ended up doing that crazy lodgepole thing like in the movie with George Clooney, but it was still pretty intense.

Then we got hit with what we called the Easter Storm, which everyone else called The Storm of the Century. (Sheesh, I’m glad I didn’t know that at the time). We weren’t actually at the house when this one happened. So when we pulled up into our (small, of course) driveway, and everything looked peachy-normal, we thought we’d escaped unscathed. Until we tried, unsuccessfully, to turn on the heat. Well. Repair Guy said ‘There’s your trouble’, as he opened the furnace and all this dead-fish-filled salt water poured out. Turned out the air intake pipe for said furnace took in a few gallons of storm-tossed water instead. Oops. 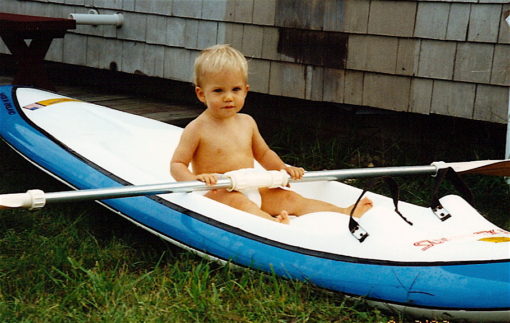 Forget looking at the cute Child in the kayak. That white thing behind her is the fish-and-salt-water (er, air) intake pipe for our ill-fated furnace

But by far the worst storm of them all, the one that got us to reconsider living in a house on a skinny-ass strip of land between two bodies of water — cute though it may have been — was the Christmas Nor’easter of 1994.

We had spent a nice family-filled Christmas Eve with The Dude’s Dad over at his house in Amagansett. (Where I am sitting now, in the aforementioned sizable-but-normal kitchen, drinking my third cup of coffee and writing this.) Well. We were on our way home, and had just made the turn on to Gerard Drive, when we noticed the whole street — the whole spit of land, actually — was dark. Very dark. As in no lights on, anywhere.

Odd, we thought. True, this is more or less a ‘summer community’. But could it be that we were the only Gerard Drivers spending Christmas out here?

It was raining. And sort of windy. But we weren’t alarmed. Just tired from all that Holiday Hilarity. So we went to bed. The Dude and I in our teensy bedroom; The Child in her Sesame Street sleeping bag parked in the equally-teensy living room. 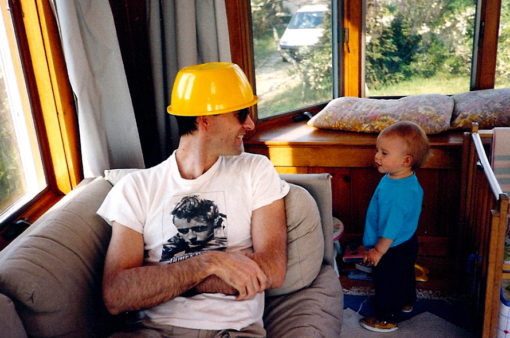 The Child, standing in her bedroom. This was before she graduated to the Sesame Street sleeping bag, but it was located in pretty much the same spot. That’s our sturdy wave-resistant Honda parked outside

We’re sleeping away when I hear a strange noise. Sort of a SLAM-pause-SLAM! I turn to The Dude to wake him, but he’s already awake. A bad sign. ‘What’s that?!?‘ I ask. ‘Waves. Waves hitting the house,’ he replies. ‘We have to get out of here.’ (Notice I don’t use exclamation points when reporting The Dude’s words. He did not panic; he never panics. Which is kind of scary, actually.)

So we throw on coats over our jammies, scoop up The Child, wrapping the Sesame Street sleeping bag over her head for protection from wind and rain, and we run to the car. (The ’91 Honda, which we still, bless its heart, own. I swear we’ll drive it till it doesn’t go anymore.)

The car is sort of underwater by this point. At least the tailpipe is. (A detail The Dude did not point out till the next day, fearing that I would, in fact, panic.) But it started, and we started on our way to The Dude’s Dad’s house, and safety.

But first we had to negotiate the causeway. This is a really narrow spot in the road, basically a cars-width bridge, that you have to go over to get to the mainland. The windshield wipers were furiously wiping, but didn’t have much effect against the waves, which were now not only washing over the causeway, but slamming into — and onto — our poor little Honda.

Well. We made it. Or I wouldn’t be writing this story, now would I? We found out the next day that the reason our street was so darned dark when we went home was because it had been evacuated while we were at dinner. We also found out the next day that our house withstood the waves — and the storm — just fine. In fact, the whole interior was sparkling like Christmas tinsel when we were finally allowed out to Gerard Drive to investigate. The sparkly stuff was salt, which had infiltrated the house through the cracks each time a wave crashed over it.

Needless to say, when an opportunity to buy The Dude’s Dad’s House came up, we jumped at the chance. You may not be able to see the water from here, but it’s behind the protective Atlantic Double Dunes, and is at least a few feet above sea level.

And the little house on Gerard Drive? It’s still there. Last time I looked, anyway.