I used to think Prince Charles was a total wimp. See, back when I was a kid, we had something called ‘bedtime’. Which meant that you were supposed to go to bed at an appointed time. Not when you got tired, or when you felt like it. ‘Bedtime’ was by Parental Decree.

And mine was 8 o’clock. And this meant 8 o’clock, Young Lady. No matter if it’s in the middle of summer and there’s no school and all the other kids are still outside and it doesn’t even get dark until after 9.

When I would whine about this to my mother by saying something like: “But Mom, I’m almost 13! Going to bed at 8 is for babies!”, she would reply thusly: “Well. Prince Charles of England is 16, and he goes to bed every night at six!”

Gosh. I hated Prince Charles. What a wimp.

One of the reasons I wanted to stay up later was because summertime was simply a fabulous time in the town where I grew up, at least during the time I grew up there. I have my fingers crossed that kids in the Greater Carlyle Area still get to run barefoot in other people’s yards catching lightning bugs, play ‘war’ with unripe persimmons, and chase after the mosquito-spraying truck on their bikes. Those were the days.

There was wiffleball (we played on an unused tennis court that had sadly lost its net), croquet (‘sending’ a weeping sibling’s ball into the tomato plants was so satisfying), and, once in a while, even a game that required some setting-up of gear, like badminton (read how a game played with our Aunt Marilyn led to a case of suspected larceny in ‘Howie and the Muscle Shirt’).

Oh, and when we weren’t playing summer games, we were eating summer foods. The picture at the top of this post illustrates another great pleasure of Small Town Summertime Life: eating messy stuff outside.

Note: I have intentionally altered the tone of this shot, partly to disguise its musty old-file condition, but mostly to help illustrate how intensely hot it was where I grew up. People tend to think of Illinois as a nice cool place. Hah! Chicago gets beastly hot in the summer, but Southern Illinois? Well. I can only say that people in the British Foreign Service who are sent to the Saint Louis Area (which is the same climate as Carlyle) qualify for hazardous duty pay. Honest. You can look it up. Prince Charles wouldn’t last two seconds. Not in those suits.

Back to some of those summertime foods. We had tomatoes, which we’d eat straight from that croquet-ball-collecting garden. We’d also gorge on strawberries. Peaches. And amazing sweet corn. On the cob, natch. (Check out my amazingly foolproof corn-cooking method buried in the middle of this riff on kale.) Oh, and watermelon, as illustrated above. And had seed-spitting contests. Which I don’t think you can really do anymore since they’ve bred the seeds out. Sigh.

But there was a catch.

These foods were literally ‘seasonal’. Which meant you could only get them once a year. This was pretty great, for the first day or two. After all, you’d been waiting pretty much all year to taste a strawberry. A fresh strawberry, that is. But after you’d had strawberries on your cereal and strawberries and cream and strawberries on top of big bowls of vanilla ice cream eaten while lying on the floor in front of the TV watching Bonanza (which was the other cool place to eat, other than outside) — well, you’d kind of wish you didn’t have to look at another strawberry, much less eat one. (“Noooo, Mom. Not strawberry pie again!”)

Not to mention that you’d have to actually pick whatever seasonal treat was around right then. I remember very long, very hot, very sweaty days out in the strawberry fields having a ‘fun family outing’ at one of those ‘You Pick’ places. (My Dad, of course, never went on these. Smart Patriarch that he was, he just ate what we brought home.) I even saw a snake out there once. And you, my Faithful Readers, know how I feel about snakes.

I told myself that once I became a Practicing Grownup, I would not pick anything for myself. I would just pull up to a random farm stand and say “Yes, I would like one of those nice boxes of previously-picked strawberries, please!”

Oh! And before I forget, there were the most amazing Church Chicken Suppers! I mean, you haven’t eaten fried chicken until you’ve eaten chicken fried up by Methodist Ladies or Catholic Guys. (They really work those connections, culinary-wise.)

But all this talk of summertime culinary delights is making me hungry. Let’s go back to summertime fun. 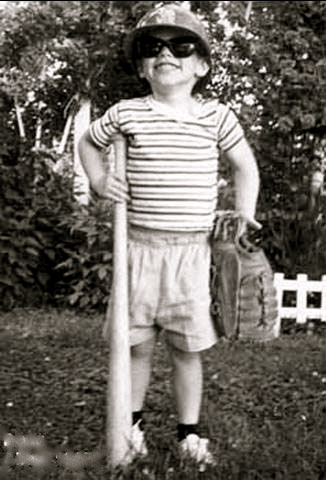 Littlest Bro getting his game on, no doubt after polishing off some Church Chicken

As I mentioned, we were outside all the time. Basically, my mom would shoo us out in the morning and call us back in at suppertime. Oh, sure, once in a while we’d slip back in to grab a cold drink or something to eat. But mostly we were on our own.

We had bikes. We had swings. We had the town pool. I can still conjure up a swell sensory memory of the taste of a frozen Milky Way mixed with the smell of chlorine and the feel of seriously hot concrete through my ‘beach’ towel. (Take that, Proust!)

Speaking of Proust, we did a lot of reading too. Which is what I’m planning to do right now. (Knausgaard!* Resistance is futile, People! And also ‘The Martian’*. Read it before the movie comes out, which will star — naturally — Matt Damon.)

*According to my Food Theory of Books, which you can read about in ‘Tolstoy is so tasty’, Knausgaard is a very large tub of popcorn that you can’t stop eating till you’ve polished off the Whole Thing. And Andy Weir’s ‘The Martian’ is, of course, a Mars bar. Probably frozen, like those Milky Ways we enjoyed at the pool. Heck, I could go for one of those right about now.

After all, it’s the second-longest day of the year. Which means I have plenty of time. Especially since nobody dictactes my bedtime anymore. But it’s a shame I’m so far away from that wonderful place where you could spend a summer’s eve riding around in a lawn chair in the back of a pickup truck, clutching a cold Busch. Now that’s really livin’, as a famous local used to say.

18 thoughts on “Remembrance of Watermelons Past”