It’s my darned fault it’s been so chilly here in the Northeast. Not only did I stow my chili (speaking of ‘chilly’) pot away, but I put my meatloaf pans in mothballs. Figuratively, that is. It’s sort of like what happened last week when I took our big fat comforter to the cleaners. It snowed.

But back to the kitchen. When the weather’s cold, there’s nothing we Henrys like better than a big ole batch of Anything Made With Ground Meat. Of course, my Oldest Younger Brother Scott, being a Californian, scorns chili made with ground meat. But the rest of us slurp it up like gangbusters. (I’m featuring a photo of a large pot of a late great batch right there at the top of this post.)

When I was growing up, my Mom made chili a lot. Her recipe for chili was the same as her recipe for spaghetti sauce — except that the chili had beans.

She’d start with onions. (Everything she made started with onions. She once told me she didn’t feel ‘right’ unless she had a whole bag of yellow onions in her kitchen. She felt the same way about potatoes. Oh, and bananas. There were always bananas in varying degrees of ripeness, even decomposition. The black ones were used for banana bread. Which, naturally, was the exception to the everything-starting-with-onions rule. But I digress.) 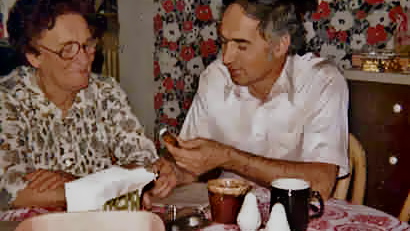 My Gramma Henry and my Uncle Mike. Looks like they’re enjoying some banana bread. Or maybe that’s a homemade pickle — could go either way

Anyway, she started with onions, chopped and sautéed. Then came some chopped green pepper. Then a can or two of tomatoes. If she added oregano, it was spaghetti sauce. If she added chili powder and beans, it was chili. Either way, it did not go unappreciated. Or uneaten. 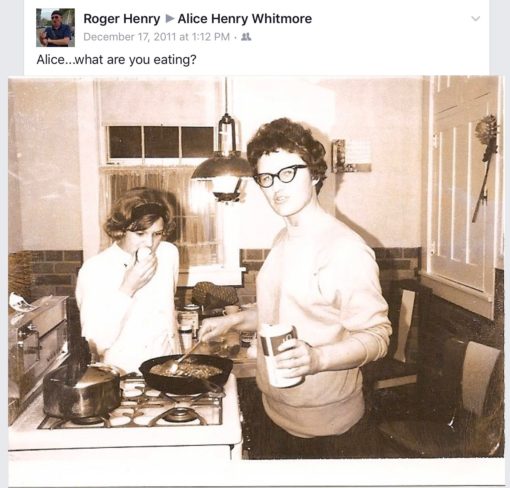 Gosh, Roger. Not sure! That looks like scrambled eggs that Aunt M is whipping up. But what I’m chomping into? That’s a Peterson Kitchen, so it’s anybody’s guess. Maybe one of Gramma P’s rolls?

My chili is a tad more complex, if not Authentically Southwestern, or even Californian. It’s not a secret, but I’m keeping the recipe to myself for now. Because this story is about Meatloaf, for which I am going to give you my recipe. (Meatloaf the food, not Meatloaf The Singer of ‘Paradise by the Dashboard Light’, which I’m only mentioning because some of you, like The Dude, may not have heard of him and won’t ‘get’ my titular pun.) 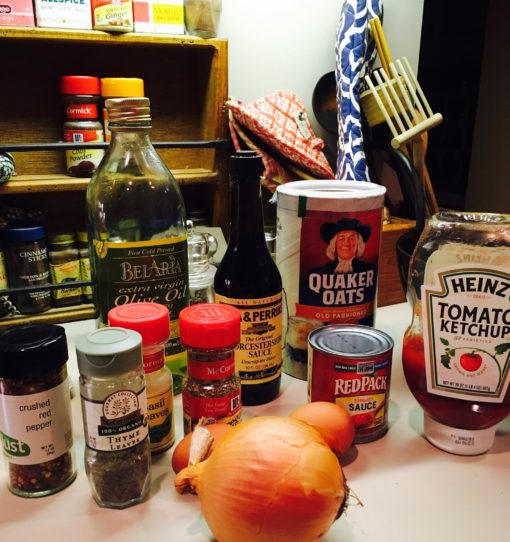 Here’s what you’ll need to make ‘my’ meatloaf. Minus the meat. Raw ground meat looks pretty icky in a photo, so use your imagination

I highly recommend making meatloaf, and making it often. Not that many people do, at least not in the Younger Generation, or in my (ahem) ‘circle’. So it’s rather a treat. And if you serve it to anyone Not From Here, why, it’s downright exotic. I once ‘dinner-partied’ some meatloaf when a Frenchwoman was a guest. She’s still raving about it — and that was at least ten years ago. 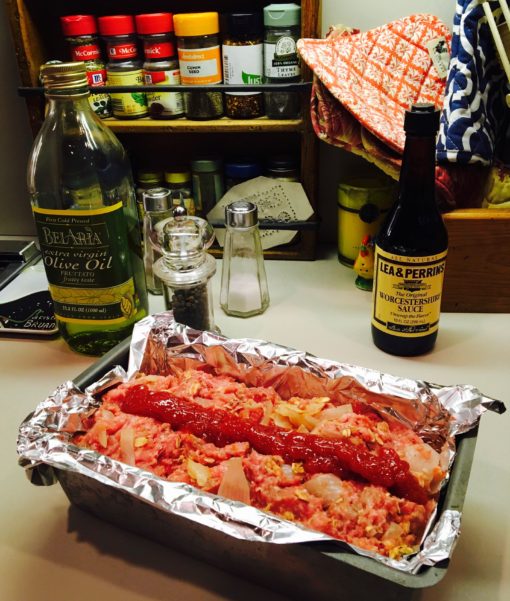 Here’s the meatloaf, ready for the oven. All mixed up, that raw meat doesn’t look too icky. I hope

Oh — before I forget. When you make meatloaf — or chili for that matter — it’s a great idea to make an extra one (or for chili, a double batch) so you can stow it away in the freezer for a rainy (or chilly, er ‘chili’) day. Trust me, there’s been many a time I’ve been too rushed (or too lazy) to cook dinner, and I’ve just thawed us out a meatcicle of some sort. 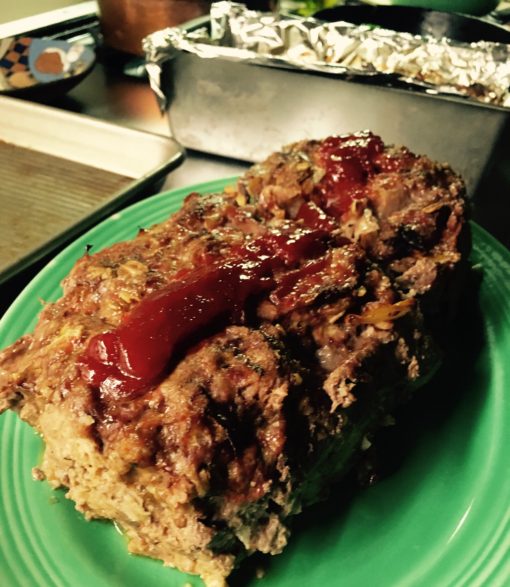 Meatloaf — again. This was last week’s. Yup, there was already a chunk missing before I could ‘capture’ it with my iPhone

So anyway. It’s still cold, it’s still March, and I’m still mad about meatloaf. And chili. And, basically, anything you can throw together with some ground meat. Even The Dude’s Mother’s Pepperless Stuffed Peppers taste pretty darned good when it’s nippy out. 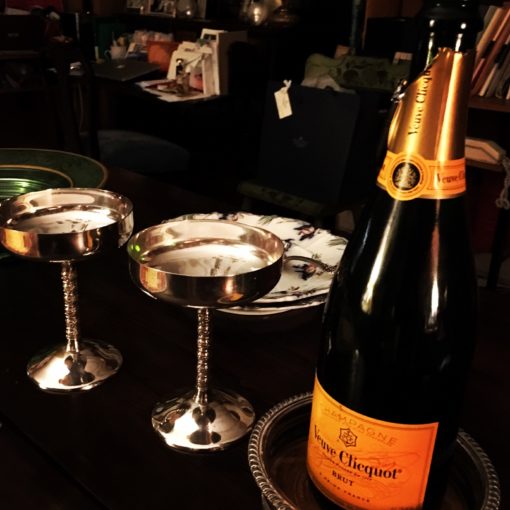 Champagne livens up any occasion. Even an Anniversary Staycation Dinner

And everything tastes good with champagne. Which reminds me. It’s The Dude’s and my wedding anniversary this weekend. I think I’ll get that big ole pot out of storage and whip up a batch of the Duchess of Devonshire’s Beef Bourguignon. Or maybe I’ll just thaw out a chilisicle.

28 thoughts on “Paradise by the kitchen light”