‘When it comes to turkey, isn’t predictability the point?’

I’m sitting here watching raindrops pelt my newly-washed windows while consoling myself with yet another cup of coffee. I just got back from the IGA, where there were no brussels sprouts to be had. Me, noticing empty bin: “No brussels sprouts?” Store employee, noticing panicky face: “Later, Miss. (She gets points for that “Miss”.) We are waiting for the truck.”

But I did get Mr. Turkey. And he looks mighty fine indeed. Speaking of fresh turkey, did I ever tell you about the time The Dude’s Dad ordered one, then put it in the freezer? We had hamburger and cranberry sauce that Thanksgiving. 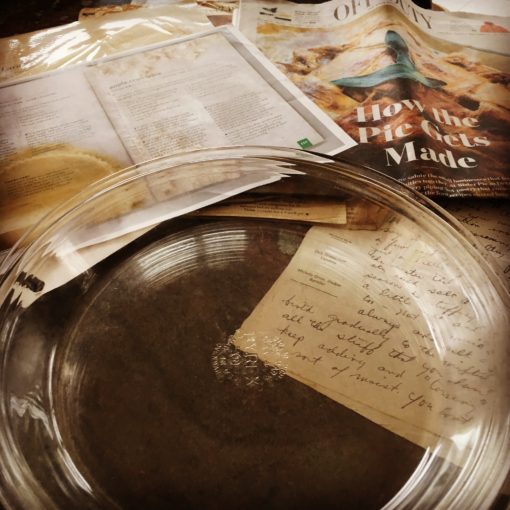 On my Quest for the Perfect Piecrust

Anyway. Yesterday, I was scouring my sources for the Very Best Piecrust Recipe, which to me is like the Holy Grail. (No matter how many times I make piecrust, I’m constantly on a quest for a Better Way. The last couple of years I’ve been adding vodka; not sure if it makes a difference, but it’s sure more fun.) 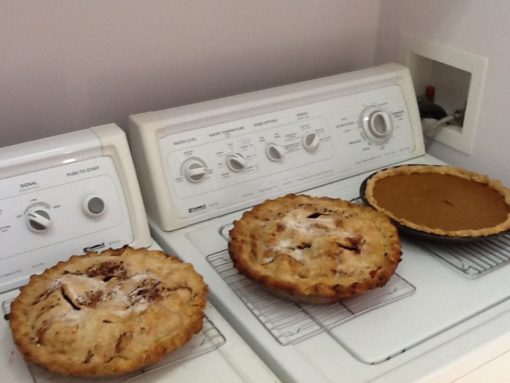 While piecrust-trolling, I kept coming across food articles talking about dry-rubbing your turkey. Which, apparently, is the new turkey cooking craze now that brining the turkey is apparently “over”. 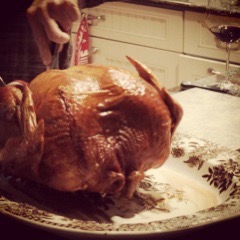 Nope. I didn’t brine this turkey. Or dry-rub it either

According to the Times, the Brining Thing happened back in 2006 when some food editor “was desperate for a new approach to holiday turkey”. But now, I guess, dry rubbing has shouldered brining aside. Brining was so popular, I read, that some cooks tried it when they were planning to deep-fry their turkeys. The problem? When the brine-soaked birds hit the hot oil, they exploded. (Which reminds me of another method I will never try which is, I kid you not, Trash Can Turkey.) 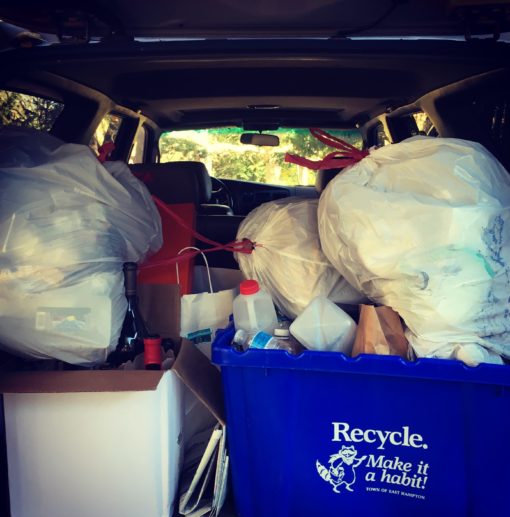 The only time my turkey will meet a trash can is when it’s nothing but bones. And actually, not even then. The bones get thrown in the woods

Now here is where I have to ask: Why would anyone who is not a food editor be “desperate for a new approach” to turkey? I mean, turkey is basically a once-a-year deal. Maybe, just maybe, you might serve turkey again at Christmas (though not at my house; pot roast reigns at Yuletide). But even then, it’s not like, say, chicken cutlets or meatloaf. You don’t come home after a long day at work and go “Turkey again?” 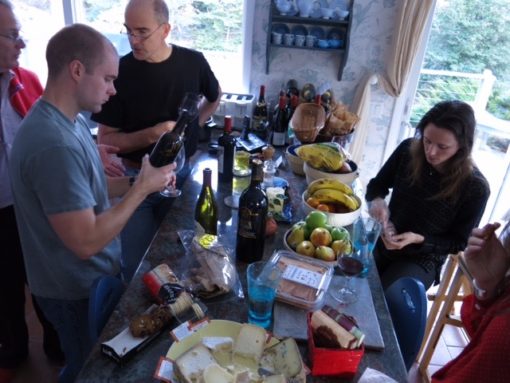 Cheese and Wine: a new Thanksgiving tradition I’ve embraced, mainly because it has nothing to do with The Bird

And isn’t Turkey Predicability sort of the point? I find it rather soothing to know that my turkey, if I follow my mother’s instructions (which I would be a fool not to do), will come out pretty much the same every year: simple, and simply delicious. 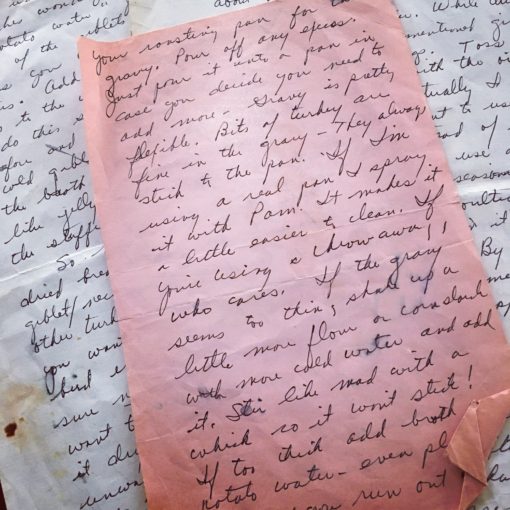 Of course, I’ve heard tell of some Turkey Creativity among those I hold near and dear. Sometimes these attempts do not go well. One year, my parents spent Thanksgiving with my Oldest Younger Brother, who, in keeping with NoCal tradition, cooks his turkey on the grill. Dad threw a few oysters into the Weber to jazz up the dressing, thus (unintentionally, I trust) infusing the whole bird with savory oystery flavor.

And I can remember when there was this fad for roasting the turkey in something called an “oven bag”. This was supposed to keep your turkey moist. Or something. (But how would it brown? I thought, even though I was a non-Thanksgiving-making teen at the time.)

I didn’t get a chance to find out, because my Aunt M, who was in charge of the turkey that year, decided she didn’t need to “waste money” on one of those store-bought bags when she had a “perfectly good” grocery bag she could use instead. It caught on fire, and so did the turkey. 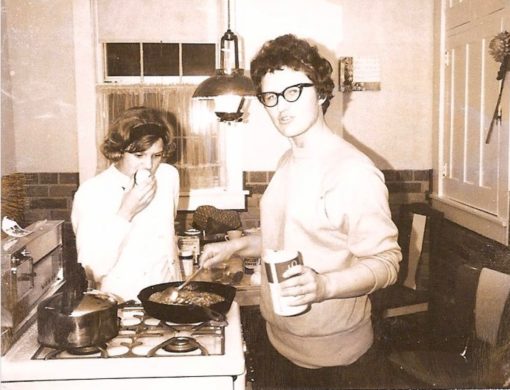 That’s me sampling something Aunt M is whipping up. On top of the stove, and not in an oven bag, thank goodness

Well, as for me, I’ve been “doing” Thanksgiving for more than 20 years now, and every year I haul out those turkey-making notes (which I will hand on to The Child, in time) and do it again — the very same way. So far, no one’s been bored. And if they have, they’ve kept quiet about it. 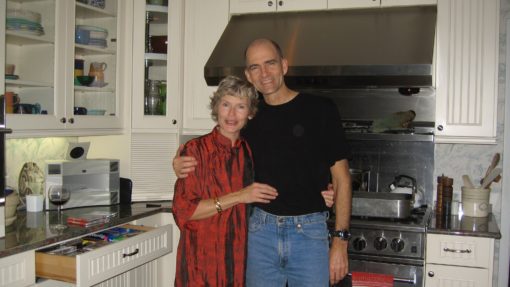 The Dude and Me on an early Thanksgiving hosting occasion. Note CD player and high-waisted jeans. Which he still wears

Oh, sometimes I change things. Early on I switched from orange-spiked cranberry sauce to just plain spiked. A couple of years ago I let The Child chop and roast the brussels sprouts instead of steaming them. (Fingers crossed I can find some this year). And now I serve roasted sweet potatoes instead of the butternut squash I thought everybody liked but found out they secretly hated. But I never touch those thighs and I certainly don’t rub that breast. 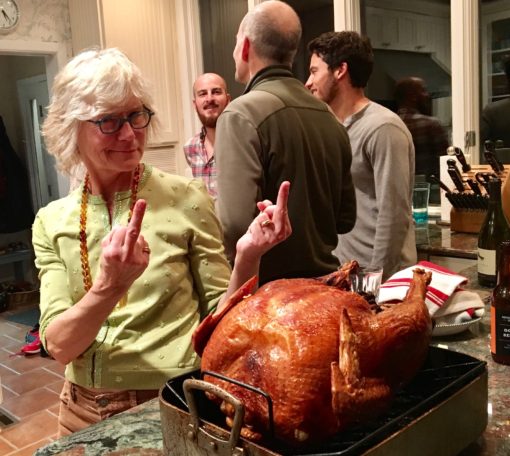 So there! And Happy Thanksgiving, one and all

13 thoughts on “My breast is in no need of a rub, thank you very much”