‘Remembering my Dad, who took napping to a whole new level — mainly horizontal’

Last Friday would have been my parents’ 66th wedding anniversary. I say ‘would have been’ not because they didn’t stay married. No, it’s because my dad, alas, is no longer with us. Dad made it to 80, which made him pretty happy. But just barely, which made the rest of us pretty sad. 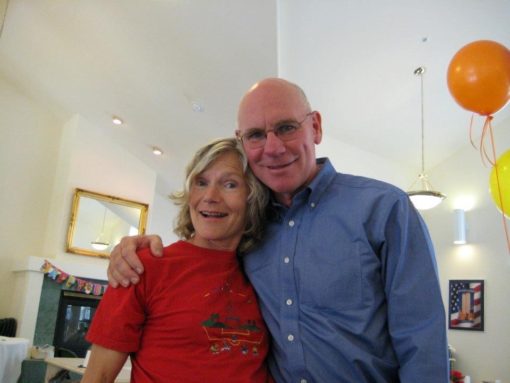 The last photo my Dad ever took. That’s Older Younger Brother Scott — and Me — at Dad’s 80th Birthday Party. Taken with my camera, by Dad

Anyway. This past January 13 got me thinking about my Dad. And if you too knew him, whether as ‘Dad’, ‘Uncle Dale’, ‘DJ’ or ‘Deej’, ‘Henry Dale’ (which is how his mail was often addressed and how our friend Regina insisted on addressing him), or even as ‘Scotty’ (he apparently had a tartan plaid fixation as a child), you know that you can’t think about him without also thinking about some of his, well, ‘quirks’.

Yes, quirks. Dad was full of them. For example, he couldn’t stand the sound of crunching. Raw vegetables being consumed in his presence made his head spin around. (Ice? OMG.) He hated crunching so much that when he went on a trip to drum up business for the civil engineering firm he helped found, the still-going-strong Henry, Meisenheimer and Gende, we Stay-at-Home Henrys would take advantage of his absence to go crazy chomping down on every raw carrot or celery stick and/or pretzel or cracker we could get our teeth into.

On these trips, he no doubt warmed up his audience with a few jokes — he was a very charming raconteur — jokes he no doubt told in his inimitable way, a technique we kids dubbed the ‘Whoa Back’. The ‘Whoa Back’ was a maneuver in which Dad would lean in closer and closer to you as he delivered his joke, till he was almost right in your face. Then, as he wound up to the punch line, he’d ‘whoa back’ on his heels and laugh — leaving you decidedly off balance in more ways than one. 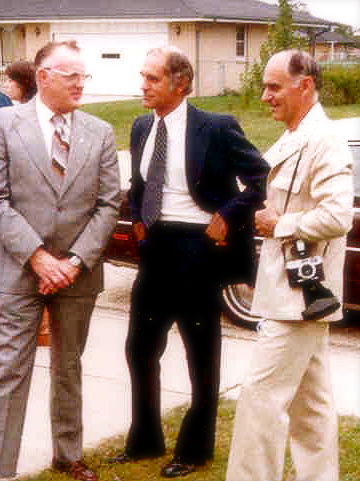 Dad getting ready to demonstrate the ‘Whoa Back’ at some gathering of the clan requiring the wearing of suits. That’s Jimmy-with-all-the-toys’ Dad Uncle Cal on the left and Uncle Don on the right

I could go on and on, since Dad was, in fact, a delightfully quirky guy full of delightful quirks. Like he could balance a spoon on his nose, a quirk (or is it a trick?) I’ve shared with you before, but can’t help sharing again. Not just because it’s so very cool, but also because, no matter how hard I try, I still can’t accomplish it. 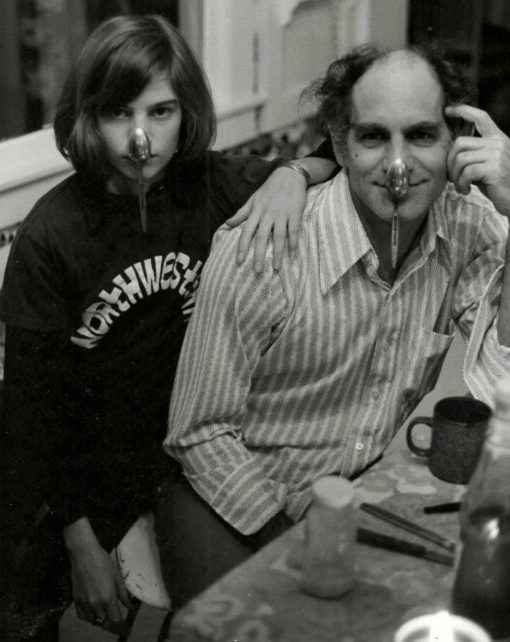 I know, I know. I’ve shown you this pic before. (Which was taken of Dad and Only Sister Laura by Older Younger Brother Scott.) But how can I resist?

The quirk I’d like to focus on today is the Napping Thing. Suffice it to say that my Dad never met a horizontal surface he didn’t like. Naturally, he’d nap on couches and in hammocks. Some belonging to us, but many others not. The couch occupied by Dad in the picture at the top of this post belonged to an HMG client who loaned us his Snowmass ski condo one very memorable cheek-by-jowl vacation week. We’d awaken every morning to Dad tuning in the 5:30 AM ski report on a very crackly transistor radio. It’s a wonder we all didn’t nap. Though it would have been tricky squeezing all seven of us onto that couch. 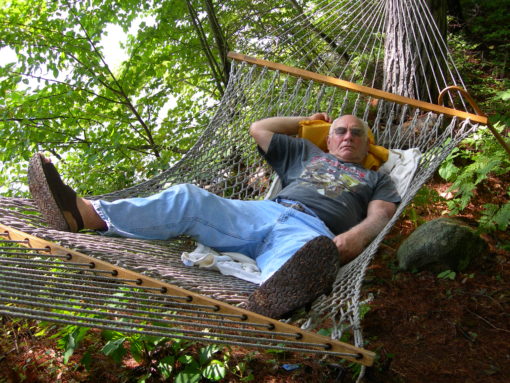 Dad napping in Somebody Else’s Hammock 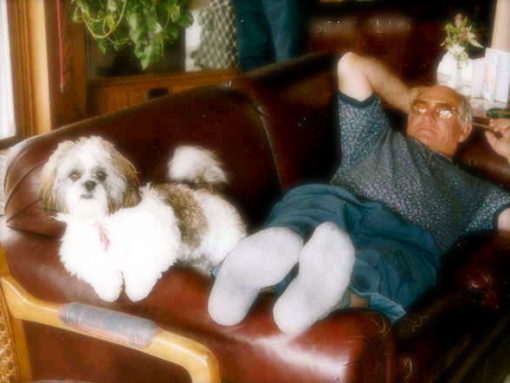 Dad also napped on sand, on grass, under trees, and sometimes, quite frighteningly, while driving. I can remember quite clearly being the only person awake (besides Dad, sort of) on those marathon drives to Gramma’s House, staring at the back of his nodding head, willing him to stay awake behind the wheel while the Meister brau Hour played on the car radio. 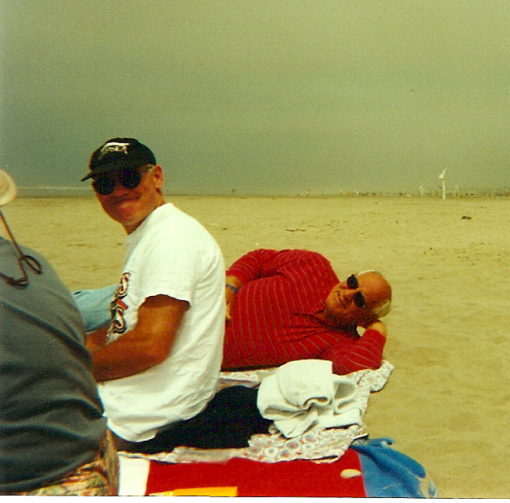 Dad napping on the sand at Cannon Beach. That’s Scott not napping next to him 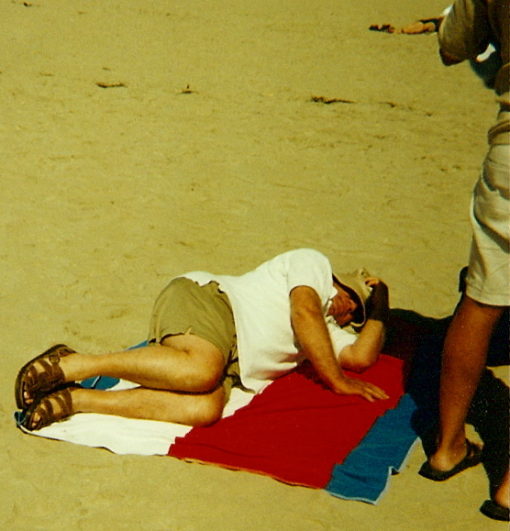 Something about Cannon Beach must have been very soporific. Dad napping again, this time next to non-napper Dave

And Dad was not only a napper, he was a napper-denier. Which meant that, if confronted with the fact that he had been napping, he would always deny it. ‘Me? Asleep? I was just resting my eyes!’ This happened a lot when the TV was tuned to something like golf. There he’d be, snoring away on the couch, and if you tried to change the channel to something more fun like, say, The Three Stooges (absolutely forbidden by our Mother because my brothers would run around nyuck nyuck nyucking each other) he’d growl ‘What are you doing? I was watching that.’

Now I’ve never been much of a napper myself, though I did inherit Dad’s aversion to crunching. (See ‘In Outer Space, No One Can Hear You Scrinch’.) Sleeping during the daytime reminds me too much of being sick, specifically of having chicken pox when I was seven and sharing Mom and Dad’s bed with equally-sick-and-itchy Scott, both of us smeared with calamine lotion and eating green jello studded with fruit cocktail while watching bad daytime TV. (Actually, at this point in my life that sounds rather pleasant.)

I do have a tendency to do what The Child calls ‘sleep watching’ and/or ‘sleep reading’. (My Mother does this too; maybe it’s a Swede Thing.) This means you nod off while reading a book or watching a movie. But I don’t think it counts as napping because neither you — nor, with any luck, your glass of wine — ends up in a horizontal position.

Well, it’s been almost eight years now since Dad moved on to the Great Davenport in the Sky. I sure hope they appreciate a good ‘Whoa Back’ up there — and that the angels have limited access to raw carrots. 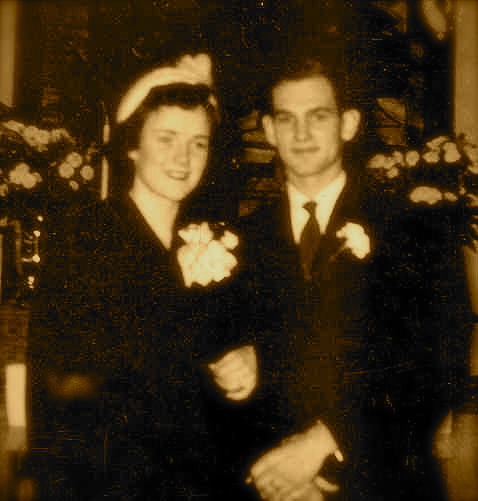 Mom and Dad at their wedding in (gasp) 1951. Looks like he’s thinking about balancing a spoon on his nose, doesn’t he?