The Dude is still kicking himself that he was ‘too busy’ to go. A friend of ours, who happened to be one of the Pope’s attorneys, invited us to his wedding. (This was way before Pope Francis, so he wasn’t one of his attorneys. But, come to think of it, I’m not sure Pope Francis needs attorneys.) Anyway, this friend was getting married to a woman from a Great Italian Family — and because of their well-connectedness, they were getting married in the Vatican.

We found out about it when we got this amazing wedding invitation in the mail. Calligraphy, of course. On parchment. Several sheets of parchment. In fact, this invitation was more like an illuminated medieval manuscript than anything else. There were pages and pages. The woman from the Great Italian Family needed a whole page just to list all her names.

There was a page for the ceremony, to be held in one of the chapels in the Actual Vatican Itself. (Not the Sistine, but close.) And pages listing all the other fun stuff planned for the wedding guests: A Ball in a Palace (“white tie or full military dress”), Rehearsal Dinner in a Private Club (“black tie”), Private Tour of the Sistine Chapel (“Appropriately Modest Attire”), Reception at the American Academy (“Whatever You Wore to the Wedding”, or something like that). Etc. Etc. Etc.

Well. It took me about two seconds to decide that I simply could not pass this up. I mean, how often do you get invited to a wedding in the Vatican? So I cashed a bunch of frequent flier miles, and got myself a ticket. A business-class ticket, no less. (This wedding seemed to call for nothing less.)

Now I needed to figure out where to stay. Of course, the wedding invitation had a whole section devoted to accommodations. Which ranged from elaborate (and expensive) to super-crazy-over-the-top (even more expensive). I decided to consult the Wedding Travel Agent for advice. (Yes, this wedding was so elaborate it even had its own travel agent.)

Since I was going solo, Miss TA recommended I stay where the Bride and her Family would be staying, the Locarno. Now, if you saw the movie ‘A Trip to Italy’, the Locarno is the hotel where Steve Coogan and Pal stay in Rome. It’s in the Piazza del Popolo, and makes a fab movie location, as you can see: 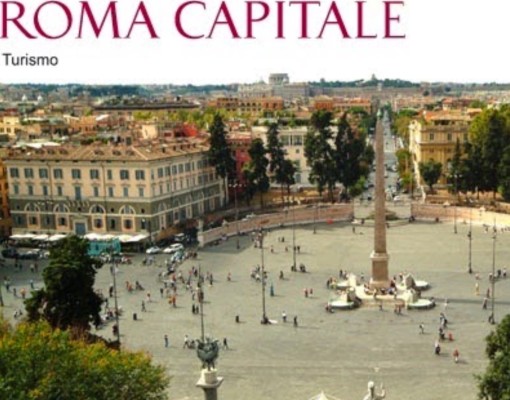 The Piazza del Popolo, where the Locarno, and my teensy part of it, were located

Well, I gulped, and said okay. (It was pricey, but on the lower end of pricey.) I would like a single room, please. So then the Wedding TA said something about ‘single rooms in Europe being very small’, to which I said something about not planning to be in the room all that much (instead of what I was really thinking, which was that I didn’t want to pay all that much), and I went for the single. More about that later.

First I had to pack. Let’s just say that there was no need for casual clothing on this trip. I overheard The Dude on the phone to a friend saying that it looked like ‘a party exploded in our bedroom’. I did manage to fulfill all the dress codes without buying anything new. I briefly considered buying a hat, and made a pilgrimage to Barney’s to find one. Well. Once I realized I was saying ‘Oh, this one is only $350, while that one is $450’, I gave up on the hat idea. I figured that, even bare-headed, they’d have to let me in; I was with them.

Thus provisioned, and clutching my hard-earned business-class ticket, I boarded my flight to Rome to discover that Britney Spears and her entire entourage were in my compartment. No, they were not going to ‘my’ wedding. But they did stay at the Hassler, where they managed to terrorize several of my more well-heeled fellow wedding guests with their all-night antics.

On the flight, Britney and her Mom and Bodyguards all took sleeping pills and drank champagne (well, not the Bodyguards), so they didn’t bother the rest of us. Though the Bodyguards did a lot of tough-guy glaring. What? Did they think we wanted to steal a tube top?

Now, we’re in Rome, and at the Lucarno. Remember that single room? The bellman opens the door and shows me into a space about five feet wide and eight feet long. I’m waiting for him to show me the rest when I realize that this is it. This is the room, not the foyer! I mean, this is the smallest hotel room (or room of any kind, for that matter) that I think I’ve ever been in. The height of the ceiling was its largest dimension. There’s a bathroom about the size of a phone booth (complete with shower with an accordion door; god forbid you drop the soap), a narrow little convent-like bed with a miniature phone table next to it, and a closet that’s so small that you hang your stuff in it facing frontwards. 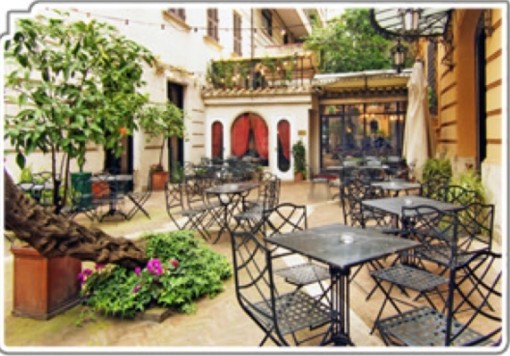 The view from my (teensy) window seat at the Lucarno

But there is a lovely little window seat with a view of the breakfast-room garden, and beautiful linens and a gorgeous (smidgeon of) carpet. And delicious-smelling soap (no need for bath salts). So I decide not to think of it as a tiny hotel room. I’m going to think of it as an amazingly luxurious train car. So there. 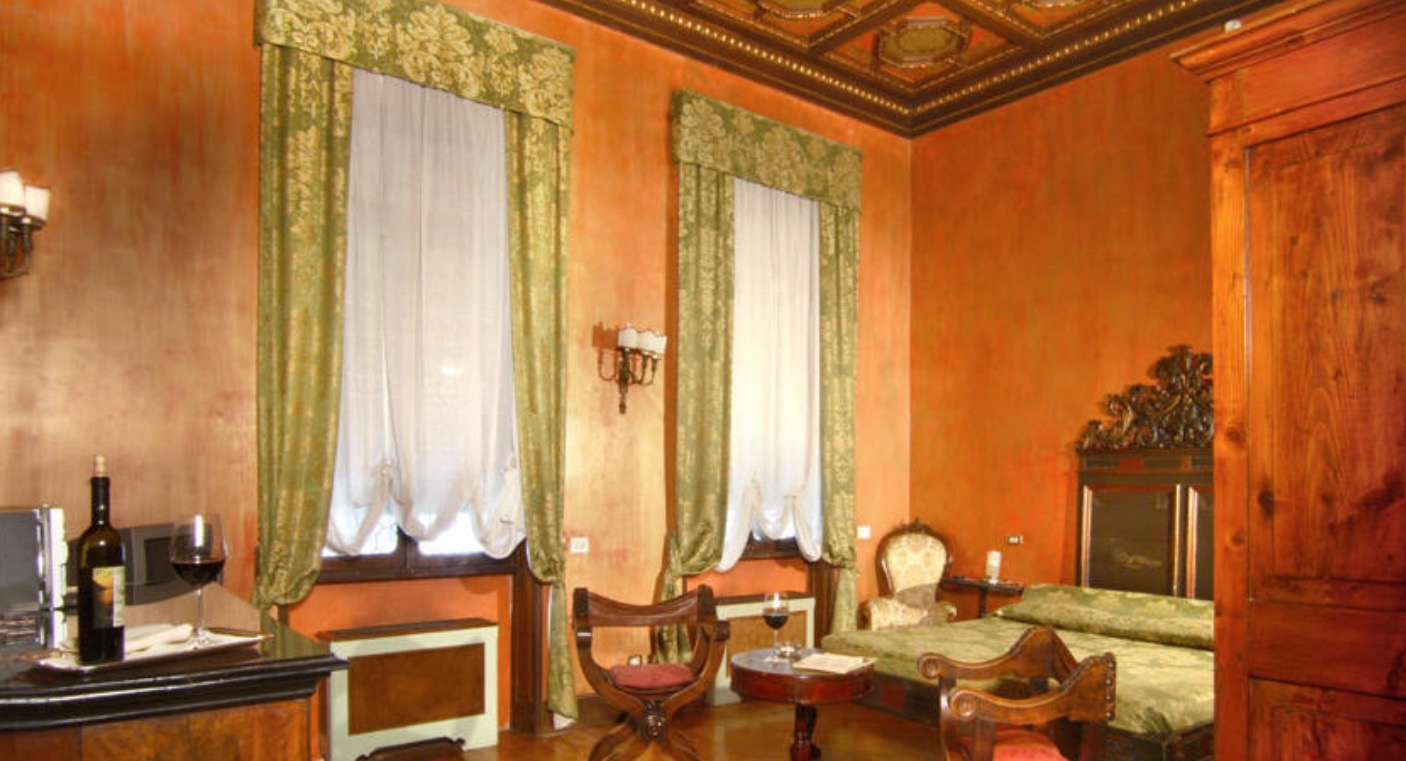 My room was a dollhouse-sized version of this 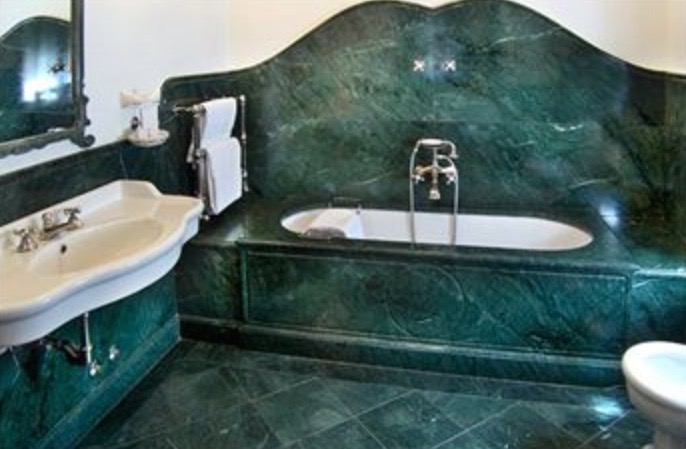 I unmooshed my party clothes from the suitcase and remooshed them into the closet, and got myself ready for the Ball in the Palace. (I found it easily; I just looked for the palace with all the brocade-clad people hanging around outside.) I danced with a Count under chandeliers of Morano glass, and drank glass after glass of champagne. And that was just the first night.

Next day we ‘did’ the Sistine Chapel (plus a bunch of other amazing ceilings in chapels not generally open to the masses), capped by the Rehearsal Dinner in the Private Club. (Even though I was not a member of the Wedding Party, I got to attend because I traveled from out of town, and came alone. Very civilized.)

And then there was the Wedding Itself. I still have to pinch myself when I recall the beautiful Italian women, who all resembled swans in their haute couture — and me — being escorted by the Swiss Guard into the Vatican as tourists craned their necks trying to figure out who the heck we were. (I opted to wear my designer-outlet Michael Kors bias-cut dove gray ‘nun dress’, as The Dude calls it, because it is very very plain. Better to ‘zig’ when they ‘zag’, I say.)

Four Cardinals presided over the ceremony, which was incredibly beautiful and moving, with celestial-sounding choir, of course. And then we all made our way to the American Academy for an equally cinematic reception.

Now, those of you who know me, even only through this blog, will not be surprised to hear that by this point I had made several New Best Friends. So, when the official parts of the Wedding and its Attendant Ceremonies were over, that meant the Real Party was just getting started.

It just so happened that the night of The Wedding coincided with an annual festival in Rome called ‘White Nights’. Basically, it means that everything — bars, restaurants, museums, shops — stays open all night. And everyone stays up, and goes out. So we did too.

And why not? There was music (of course) everywhere, a ferrari rally along the Via Veneto, and even a screening of ‘La Dolce Vita’ on open-air screens next to the Spanish Steps. I will spare you the details of that action-packed White Night, but suffice it to say that I definitely made the right choice not spending money on a bigger room — I wouldn’t have spent any time in it anyway.

And, while I did not jump into the Fountain of Trevi like Anita and Marcello in the picture at the top of this post, I had a fantastic-enough time not to return to my room till, oh, 3 or so.

Since it was dark anyway, and I’d had my share of Bellinis, I didn’t notice that the White Night had suddenly turned Quite Dark. Little did I know that the power had gone out, not just in the Locarno, not just in Rome — but all over the Nation of Italy.

Yes, this was the Italian Blackout of 2003. At 3:20 AM, thousands of people celebrating White Night in Rome were stranded in the dark. Hundreds were stuck in underground trains and/or had to sleep in the subways (!) When I found out about this you can bet I felt pretty good about my teensy room.

This story is getting very long, so I’ll bring it (and myself) home. The airport, of course, had no power either. When I arrived there (after a scary ‘Italian Job’-like cab ride through Roman streets with no traffic lights), it looked like a disaster area: hot, tired tourists sitting on the non-conveying luggage belts, yelling at ticket agents behind non-working computers. You get the picture. But this is where that other benefit of business-class travel kicked in: Access to The Lounge. Which was, miraculously, air-conditioned (did it have a generator?)

At any rate, Britney and I were quite comfy while we waited in isolated splendor for the control tower to power up. Eventually we did take off, and spent an uneventful flight sipping champagne and not exchanging fashion tips till we touched down in New York, and re-entered reality.

6 thoughts on “La Dolce Vita and Me”