‘The “Playdate”, back in Midcentury Modern Times.’

Last week I wrote about the Midcentury Modern custom of sending a high-school social studies class on a field trip to a maximum-security prison. I say “custom” because, frankly, I was astonished to find that many of you readers out there had done the very same thing. (And that’s not counting those of you who went to the very same high school as me.)

This week I’m curious to see how many of you grew up experiencing the Midcentury Modern version of the “playdate”.

“Playdates”, for those of you who don’t have, haven’t had, or don’t know anyone with children, are when parents or caregivers (what we used to call “babysitters”) set up specific times and places (“dates”) for kids to get together to “play”.

I just love that there is an actual Wikipedia entry for “playdate”. If you don’t feel like clicking, here’s what it goes on to say: Playdates have become common because the work schedules for busy parents, along with media warnings about leaving children unattended, prevent the kind of play that children of other generations participated in.

Hmmm. Just what “kind of play” was this?

Well. We rode bikes (without helmets, often with siblings perched on the handlebars, and sometimes for extra excitement we followed in the foggy wake of the mosquito-spraying truck), went skating (on frozen flooded cornfields in the winter and hot cracked sidewalks in the summer), made snow forts and tree houses (Middle Younger Brother Roger built a memorably elaborate one with three stories). 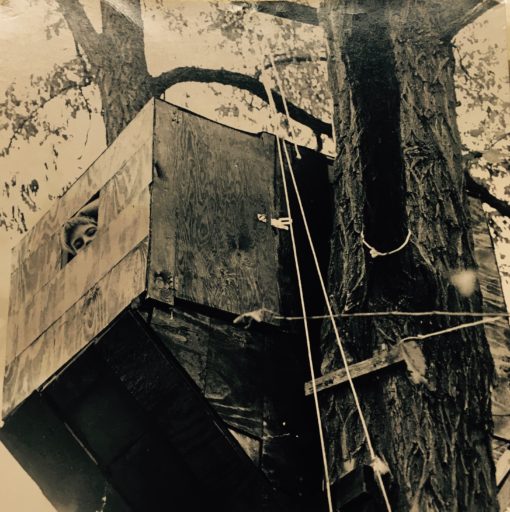 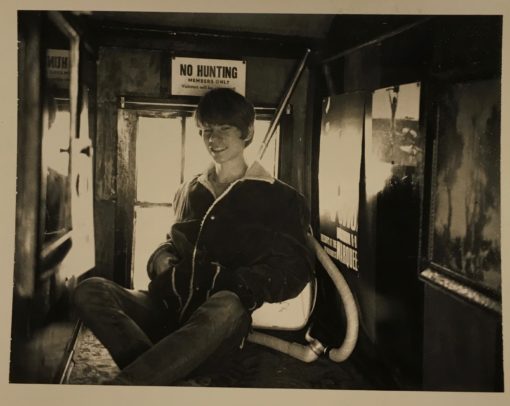 Inside the treehouse. Which you could, no doubt, sublet for big bucks here in NYC. Excuse me, but is that a vacuum cleaner?

We played vigorous games that involved much running around and squealing, like hopscotch and tag. We caught fireflies in summer (put them in jars, poor things, or ripped off the lighting-up bits and used them to decorate ourselves — see “Remembrance of Watermelons Past” for more.) And we waged “wars” with, depending on the season, snowballs or overripe persimmons as weaponry. 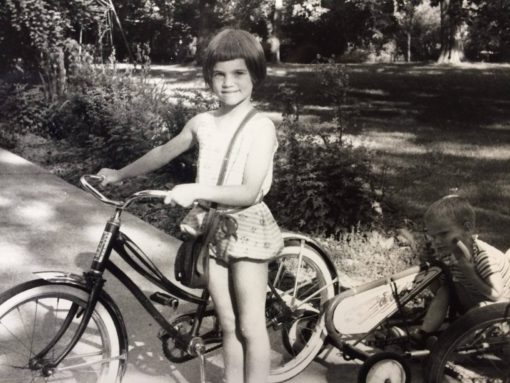 A couple of free-range children, Only Sister Laura and Littlest Younger Brother Doug, terrorizing the hood on their bikes

Most of the time we children were, as Wiki says, “unattended”. We formed our own groups and ran around the neighborhood with no regard to boundaries or property lines, knowing to avoid the Yard With The Mean Snarling Dog or the House With The Scary Old Lady. (She would open her mouth and thrust her dentures at us. This was really scary since we didn’t know about false teeth; we thought she could just sort of do that with her mouth. Sheesh.)

If we were lucky, we got to play at one of our grandparents’ farms. This usually happened at a family reunion. The grownups were usually inside “catching up” and drinking coffee, while we kids raced around daring each other to do reckless things. I recall a particularly exhilarating form of fun involving jumping onto a moving cart meant to hold milk cans (instead of Henry cousins) while it bounced and jounced at breakneck speed down a hill behind the barn. 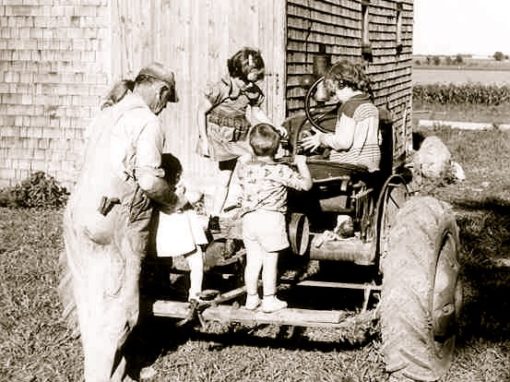 Grampa Henry, in “attendance”, encouraging small Henry cousins to play on the tractor

If we were “attended” at all, it was usually by an older child or hapless porch-bound adult who was instructed to “keep an eye on” the kid(s). (That’s where the “I’m watchin’ him” of the title comes from. This was what said “attendant” would peevishly whine, usually right about the time some little kid was about to eat a bug.)

Oh, and every once in a while you’d hear “Somebody’s gonna get hurt,” usually from some aunt or uncle covering his or her ears to block out our joyful shrieks. But (mostly) we didn’t. We (mostly) survived to play another day — without “poking anyone’s eye out” or “breaking our necks”. 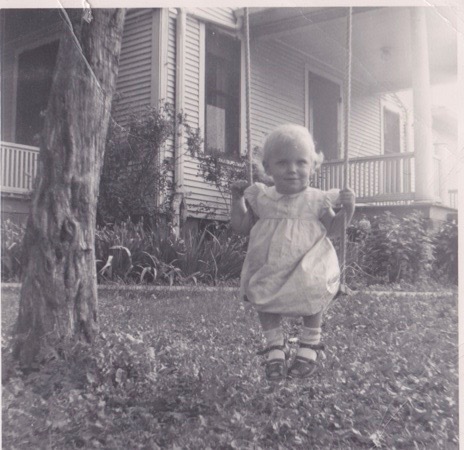 I was pretty little, so I’m pretty sure an adult was actually “keeping an eye on me” here

By now you’ve noticed that most of our playing was done outdoors. This was only partly because being outside was good for us. See, most mothers then (or at least the mothers of the kids I knew) didn’t “work”. At least not at jobs where you left the house and/or earned money. I did know one mom who was a teacher, but that sort of didn’t count since she was at home when her kids were.

So, instead of setting up “playdates” to deal with “work schedules”, our moms would just, basically, throw us all outside. Where we stayed. Oh, you could come in for the odd glass of milk or stray oatmeal-raisin cookie, but you were pretty much expected to make yourself scarce till suppertime, when your mom would step onto the back porch and call. Me, I would have loved to have sat reading inside on the couch all my free time, but my mom said I would “turn into a houseplant”, and threw me outside, book and all. 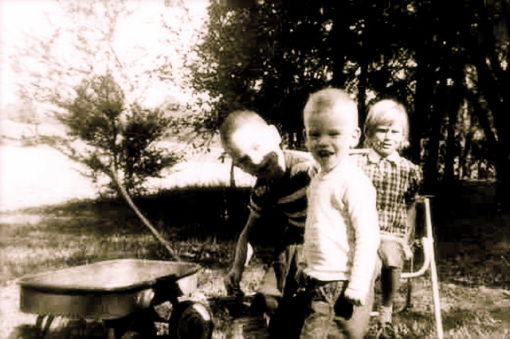 Scott, Roger and Me. On a “playdate” with our wagon

This happened in all weathers, though sometimes when it rained mom would cut us some slack and let us rummage in the attic. (See “In an alternate universe, I would have been a redhead” for hilarious detail.)

Was this only a Midwestern Thing? Nope. I have it on good authority (from The Dude himself) that he and his cousins Jack and Charlie weren’t just shooed outside. They were dropped off at Big Reed Pond near Montauk to fish and camp (in sleeping bags, not tents) all by themselves, and were picked up the next day. (Aunt Eleanor would honk the car horn, and they’d come running.) They were eight, nine, and ten at the time. 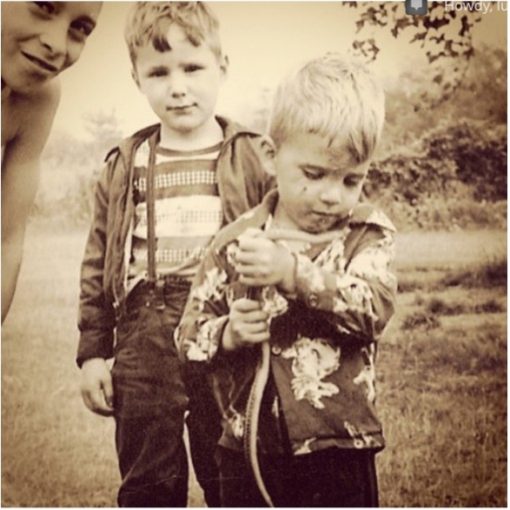 The Dude (holding snake) about the age he was when camping under the stars alone. Well, his cousin Charlie (in suspenders) was there too. That’s Dude’s brother Bill smirking in the corner. Not sure where fellow camper Jack was

Even my hilarious Hairdresser Pal, Anthony, who grew up in Brooklyn, said he and his buddies played outside all the time — stickball, kick the can, all those classic Woody-Allen-movie games — pretty safely, and with no adults around. Though he did say the Mean Kids would sometimes steal your marbles.

Well, we “children of other generations” are grownups, and have been for a while now. Some of us had kids of our own and (okay, I’ll admit it) scheduled the occasional “playdate”. But, I’m happy to report that The Child, Millennial though she may be, did get to experience some play the good old-fashioned Midcentury Modern way: 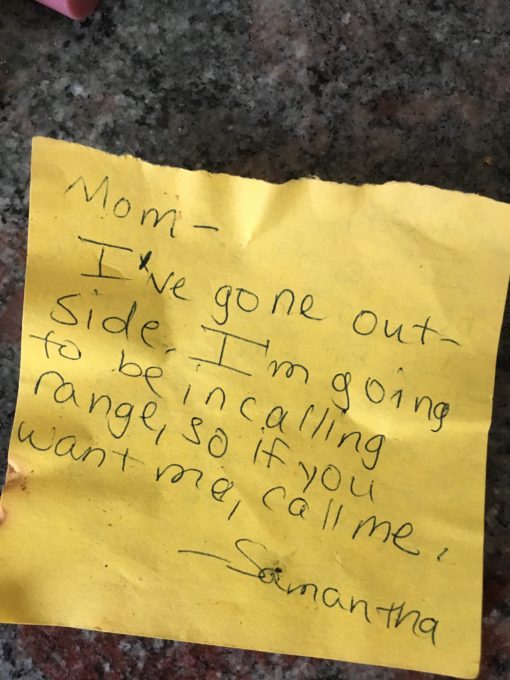