I have this Teddy Roosevelt fixation. Maybe it’s because my name is Alice*. (In case your history’s a bit rusty, Teddy’s daughter Alice Roosevelt Longworth was a lively cigarette-smoking rebel who grew up to be a famous elderly curmudgeon. She had a needlepoint pillow that read ‘If you don’t have anything nice to say, come sit by me.’)

*Yes, ‘Lutheranliar’ is really named ‘Alice’. After my Gramma. Middle named ‘Celia’. After my other Gramma, whose actual name was Cecelia. But my mom said she shortened it so I wouldn’t spit on people. Go ahead; try it: “Alice Cecelia”. I rest my case. Or my mom does anyway.

And Teddy? Well, he did crazy things like wander off into the wilderness all alone and lead charges into battle on horseback. And he still found the time to read two books a day — even while he was busy being President. 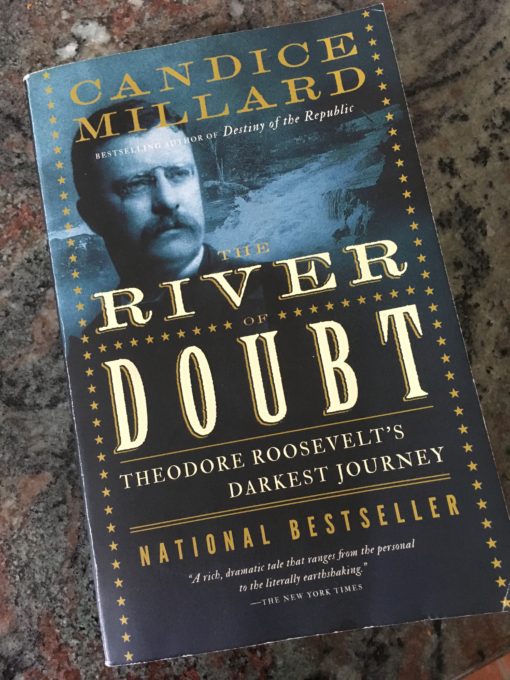 Teddy almost died of malaria making the same (gulp) trip we did a couple of months ago. Read about his trip in ‘River of Doubt’. Read about ours in ‘Eat. Or be eaten’ or ‘The Curse of the Potoo’

One of the coolest things that Teddy did (or at least I think so) was how he evaded the pesky ole Secret Service. Since Teddy had actually become President when the guy before him, William McKinley, got shot,  there were lots of Secret Service agents following him around to make sure that this kind of thing didn’t happen to him, too.

But Teddy liked his Alone Time. So, say, after dinner out at Oyster Bay (which was like Mar-a-Lago, only with animal heads instead of chandeliers), he would casually stroll out of his house, and — in black tie, which is how they ‘dressed for dinner’ in those days — would just slide off this big ole sand cliff all the way down to the beach. While remaining perfectly upright on his patent-leather-shod feet, mind you. Then off he’d stroll, puffing away on his cigar, while the Secret Service guys tried to figure out how to scramble down after him to do their duty. 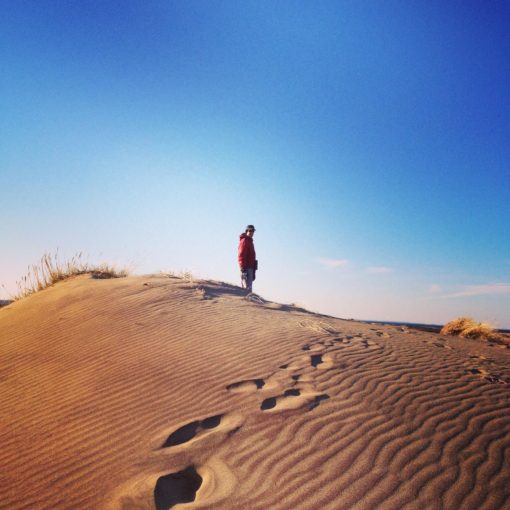 One of ‘our’ sand cliffs. At a place called The Walking Dunes. Yes, The Dude and The Child — and even The Child’s BF — know how to slide down. But they don’t wear black tie while doing so

As if it weren’t daring and exciting enough to slide down the sand cliffs, The Dude and The Child jump off them too. I honestly don’t ‘get’ this Thing the Whitmores have about jumping from heights. But, trust me, they do it. And they do it a lot. 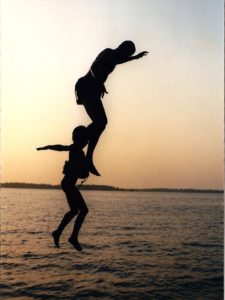 The Dude and The Child jump from the top of my parents’ late lamented houseboat, The Sir Launch-a-Lot 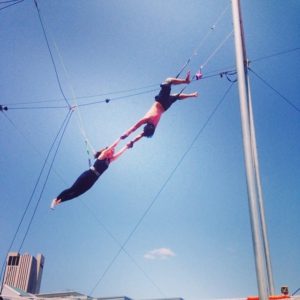 The Child jumping while swinging from a trapeze. So glad that Anonymous Person was there to catch her 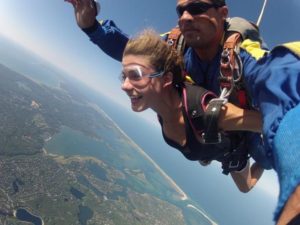 The Child and Another Anonymous Person jumping from a plane. And she has done this more than once

The Jumping-From-A-Plane Thing is where she really loses me. The only way I could imagine myself jumping from a plane would be if it happened to be on fire.

But back to the Jumping-From-A-Cliff Story. Which happened during a long-ago Thanksgiving Weekend. You Devoted Readers (bless you) know that I believe Thanksgiving to be The Best Holiday Ever. (For my very persuasive arguments as to why, see “Turkey Shoot”.) One of them is because we always spend it with fun people. Another is because we do fun things — like go hiking. 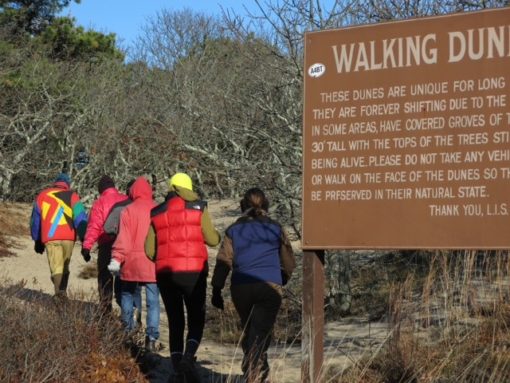 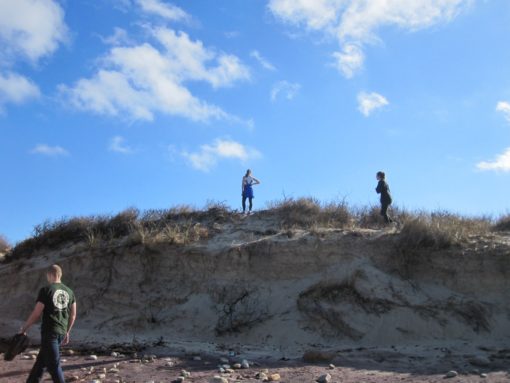 Same dunes, another–less nippy–T’giving. And yes, that’s The Child (and Brave Pal) up there getting ready to slide (or maybe leap)

Anyway. On this particular Thanksgiving, we came to a part of the trail where The Child and The Dude liked to do their Jumping Thing. Now let me say right here that, yes, it can be done — but you have to know the right way to do it.

Yes, I do know the right way to do it. But does that mean that I do? You guessed it: not on your life. I remember only too well my mom’s old saying “just because your friend jumped off a cliff, would you do it too?” 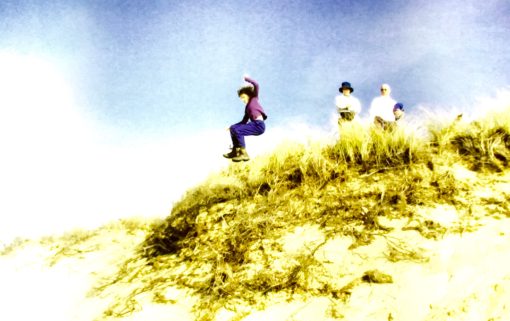 The Child jumping from the Cliff in Question. On the Actual Day spoken of in this story. (Sorry for the poor quality; old photo found in a drawer.) Yes, the Guest Who Shall Remain Nameless is one of those at the top, watching

Yes, I do have documentation of The Guest jumping. But I will spare him the pain of possibly recognizing himself. Though he was not spared the pain of jumping — and of landing smack dab on his tailbone. The Dude and another of our sturdier guests had to do that thing where you link your arms to make a sort of ‘chair’ and then basically carry him out. Needless to say we were a loooong way from the end of the trail. And, as it so happens, he was one of the Larger Guests We’ve Ever Hosted.

Moral to the story? Listen to your mom. Don’t jump from cliffs just because your friends (or their children) do. And don’t name your children names with sequential sibilant sounds. 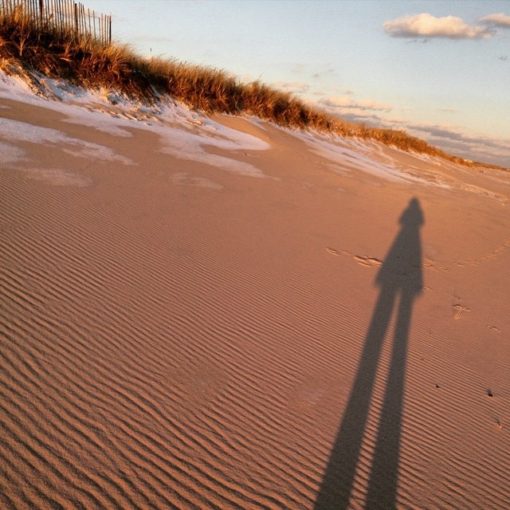 The only way my feet will ever slide down a cliff

19 thoughts on “If your friend jumped off a cliff, would you jump too?”