‘My living room is green and gold.’

Who knew Willem de Kooning was such a merry prankster? He was known for his paintings, particularly his ‘Women’ series, but I certainly didn’t realize he had such a wicked sense of humor.

If you’re interested, you can read more about de Kooning here. And if you look here, you’ll see examples of his work (including a couple of pretty scary-looking ‘Women’) at a cool site called Artsy. But you might want to finish this post first. What happens is pretty funny.

If you’ve been reading this blog for a while, you may remember that my father-in-law, Dad of the Dude, was a famous urologist. With even-more-famous guys as patients. Urologists’ patients are almost always guys. (The Dude himself is also a doctor, but an ophthalmologist, and deals with a whole other portion of the anatomy.) Anyway, the original Dr. Whitmore dealt almost exclusively with very famous, very grateful, guys.

They were so grateful, in fact, that they often gave him gifts and/or did nice things for him. (There’s a cool example of Malcolm Forbes’ generosity in my story ‘They needed the eggs’) But back to Willem de Kooning.

You’ve probably guessed by now that Mr. de Kooning was a patient of the Dude’s Doctor Dad. And that he was grateful. So what did de Kooning do? He offered to paint the Whitmore Family their very own de Kooning painting.

Dr. Whitmore went home and told his wife about this gift. Whereupon Betsy (the wife, and Mom of the Dude) picks up the phone. The conversation went something like this:

Dude’s Mom: Mr. de Kooning? I hear you want to paint us a painting. That’s so nice of you!

D’s M: I just wanted you to know that our living room is green and gold.

Well. Some time passes, and sure enough, the painting arrives. It’s abstract (natch), and a landscape. It’s horizontal, about three feet wide and about a foot and a half high. It’s called ‘les Orages’. Which means something about waves and/or storms. (My French is a little rusty.)

What was really cool was that the painting was signed, right in the lower left corner, with not only de Kooning’s name, but with an inscription that read ‘Thank you, Dr. Whitmore’.

So, anyway. This painting hung in the Whitmore living room in Plandome, New York, for years. Where it did in fact look marvelous with green and gold. 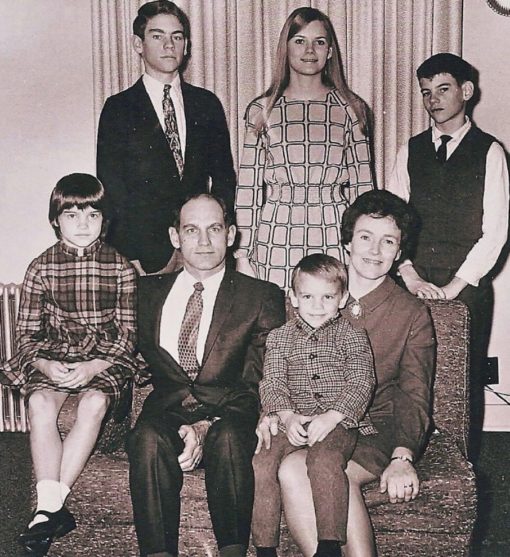 My family, in a portrait taken at about the same time as The Dude’s family photo featured up top. No de Kooning in the background. But that is rather a nice radiator

More years pass, about thirty, and so does the painting. ‘Les Orages’ becomes the property of the Dude’s sister, who, for some strange reason, does not want to hang the painting in her living room. (Maybe hers wasn’t green and gold, and she thought it might clash.) Instead, she wants the Dude and me to keep it for her. Okay, we say. As long as you don’t mind us looking at it. And so we had a genuine de Kooning hanging on our living room wall.

Then there came a sad event. The Dude’s sister died. And her husband didn’t want the painting. Maybe it made him sad. Or maybe he just realized it was a good time to sell de Koonings, because he (de Kooning) had just died.

The Husband asked if the auction-house people could come by to check out the painting. We’re, like, sure. I mean, it wasn’t our painting, even though we’d enjoyed its great-with-green-and-goldness in our own living room for several years by then. Funny how you can get used to looking at a nice piece of famous art. I had a feeling I was going to miss it.

But I dutifully moved ‘les Orages’ from its prominent position above our couch to an easier-to-examine position leaning against it. Then the auctioneers started coming. The girl from Phillips was first. She looked at the picture, front and back, took a few pictures, left. Same thing with the guy from Christie’s. Then came Tobias Meyer, then Head of Contemporary Art at Sotheby’s.

Tobias looks at the painting, goes ‘hmmm hmmm’ for a bit, then lifts the painting from its couch-leaning spot, and turns it so that it is vertical, not horizontal. And then he says:

You have one of the ‘Women’.

Well. Tobias Meyer knew a lot of things. But he didn’t know the story of the Dude’s Mom’s phone call. When I told him, he thought it was pretty rich. He told me that de Kooning did in fact have a wicked sense of humor. That he probably went back to his studio, took one of his vertical ‘Women’ paintings, turned it so that it was horizontal — and wrote the inscription in the lower left corner, thus insuring that the Whitmores would have one of his ‘Women’ hanging in their living room whether they liked it or not. Hah!

Those ‘dunes’ and those ‘clouds’? You can imagine what they looked like once they were turned ‘sideways’ — er, right side up. Not to mention what the ‘gulls’ really were supposed to be. Double Hah!

Oh, and don’t forget to check out ‘The Emperor has no peppers’. The inadvertantly-hilarious Mom of the Dude, bless her heart, plays a starring role in that one, too.