‘Where everyone falls in love with the wrong person, and dies a horrible death in the end’

Maybe you’ve heard this joke. It’s the one about the guy who goes to the ballet and asks, “Why don’t they just get taller girls?”

Sorry. My dad used to tell that one, and I don’t know any opera jokes. I do remember there was an old Bugs Bunny cartoon that was a parody of Wagner, but actual opera jokes? Hmmm.

I wanted to start with a bit of levity because, most of the time, opera is sort of the opposite of humorous. But that’s what I love about it. I mean, what’s not to like about poisonings and sword fights and firing squads? And brutal stabbings with daggers — of bad guys (take that, Scarpia!) and of one’s self (poor Butterfly). Oh, and let’s not forget the jumpings to one’s death off parapets. That’s in Tosca, my very favorite opera. 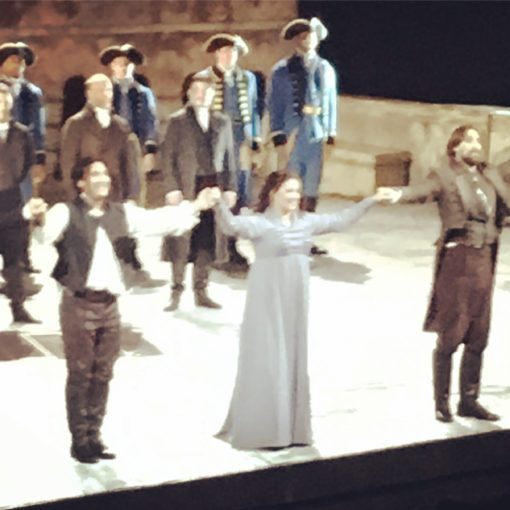 Anna Netrebko rocks the house as Tosca. Here she is soaking up her zillionth curtain call after jumping off that parapet

Anyway. I’m not going to get into a lot of Opera Stuff. Except to say that I absolutely love it. Except for maybe exploring the upper reaches of the Amazon, opera is quite possibly the most exciting thing I do. At least with all my clothes on. Opera is even exciting before it starts. Just check out this video taken from the balcony of the Met:

And it’s exciting after it’s over, too. I know people who are content to watch those “live in HD” opera movies. And I’m happy for them. But they miss the curtain calls. Which can be crazy (and practically the Best Part). The other night after Pretty Yende (yes, that’s her name; she comes from a part of Africa where parents name their kids what they hope their kids will be — she has a brother named ‘Prosper’) sang Lucia (as in Lucia di Lammermoor), the house was fully brought down. People were not only ‘brava’-ing like mad, they were tearing up their programs and showering dear Pretty with the confetti thus made. And the screaming and shouting and stomping of feet? I bet you could hear it from wherever you were that night. You just thought it was thunder, or that volcano in Hawaii.

Dear Michael Fabiano as Lucia’s driven-mad-enough-by-love-to-stab-himself-and-still-keep-on-singing lover got a Standing O that wasn’t too shabby either. He’s a Jersey Boy who got an infamous start in the documentary ‘Audition’, which is worth watching even if you think opera is for effete snobs. Michael’s sort of a bad guy in this film; while everyone else is being nice and self-effacing, he wants to win. (And he does! So operatic.) 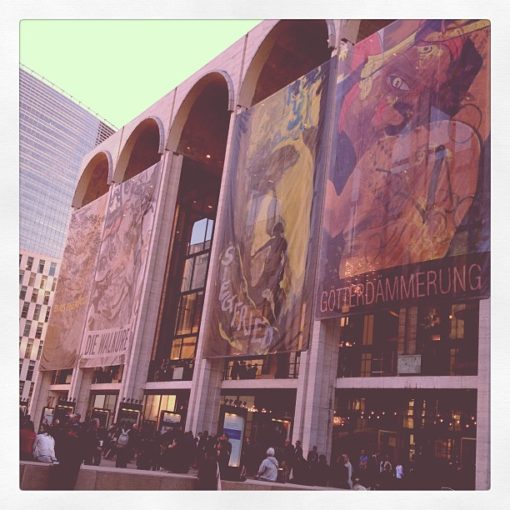 Outside the Met during the Ring Cycle. Four days and like 40 hours of Wagner. A once-in-a-lifetime experience. Literally

It’s fun to watch that documentary. It’s kind of like ‘Spellbound’, but with singing. And the singing is all aria(s) all the time, so it’s not too intense. The Dude only likes arias; he thinks whole operas are way too long. And he’s not wrong — most are at least 3 hours, and some, like Tristan und Isolde (my other fave) clock in around 5. And don’t let’s get going on the Ring Cycle. The Ring goes on for days. I adore opera, and once was enough for me. 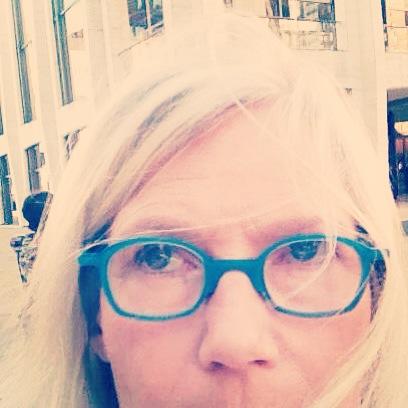 Me, taken midway during my Ring Stint. Yup, one result (other than a sore butt) was my official blog photo

I could go on and on about opera. But then, like one of those Soviet works like ‘The Nose’ I’d no doubt put you to sleep. (I made myself stick around for the whole Nose experience, but I hated it with a dreadful hate. Sorry, Shostakovich.)

I couldn’t start with an opera joke, but I’ll end with a funny opera story. Dark, but funny. The other night, when I was watching Pretty and Michael do their mad-scene-and-self-stabbing Thing, there was a crash in the box behind me. (I should explain that by ‘box’, I mean a side-parterre box, in my opinion the best value in the House. These are located just to the sides — hence the name — of the Grand Tier, and not only are a perfect perch for singletons like me, but just as good as the GT boxes, which cost an Absolute Fortune, and are usually populated by Famous Rich People.) 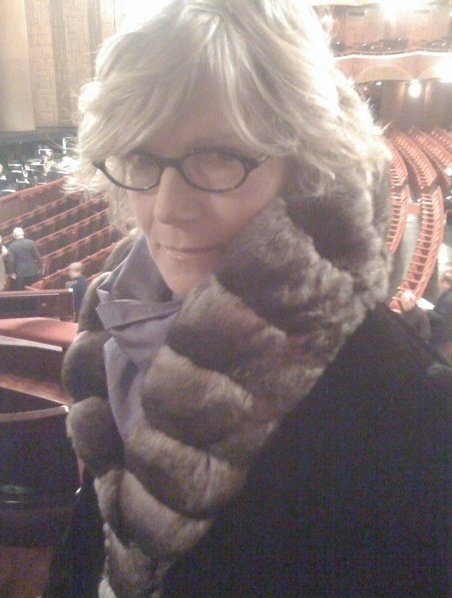 Me, ensconced in my side parterre perch. Where the view is quite wonderful, and not that crazy-pricey

Anyway, this crash came from the Expensive GT Box right next to me. Someone had fallen to the floor, upturning her chair and that of her neighbor. After the crash, there was a commotion, then three ushers entered the box with flashlights to deal with the situation. Turns out said Someone had been ‘overserved’ some overpriced champagne, probably in the Grand Tier Restaurant during intermission. 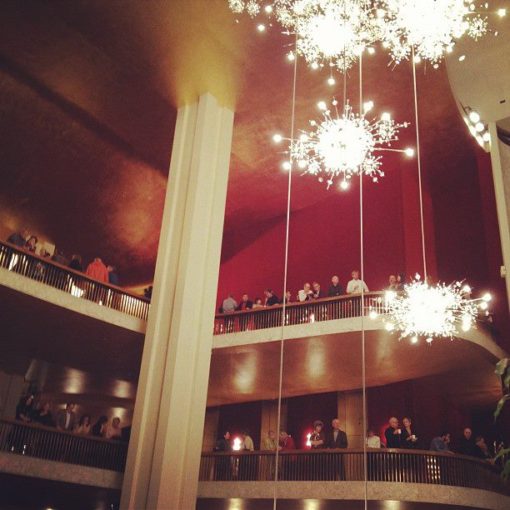 The Met during intermission. Sometimes I have champagne, but I usually indulge in calling my Mom

During the ensuing commotion, I could hardly pay proper attention to Poor Tosca stabbing Evil Scarpia. I could hear the ushers whispering things like “Can we help you up?” and “Wouldn’t you like to get up from the floor and go lie down, um, somewhere else?” while the woman protested (loudly) “NO, I am FINE” and “I just need to STAY RIGHT HERE” and suchlike. It was a good thing it was dark; if I’d caught the eye of my fellow parterre-boxers we would have all burst into inappropriate-for-opera giggles.

Finally, happy ending in the box (Well-Heeled Woman exited stage left); satisfyingly tragic ending on the stage. Lucia goes mad, her lover gets stabbed, Pretty and Michael bring down the House, and I get myself home to (maybe) more champagne. Curtain. 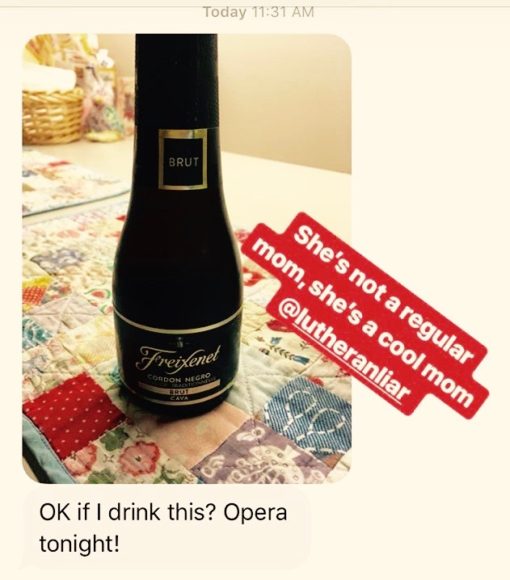 Sometimes I get champagne at intermission too. And sometimes I just steal The Child’s

4 thoughts on “A Night at the Opera”